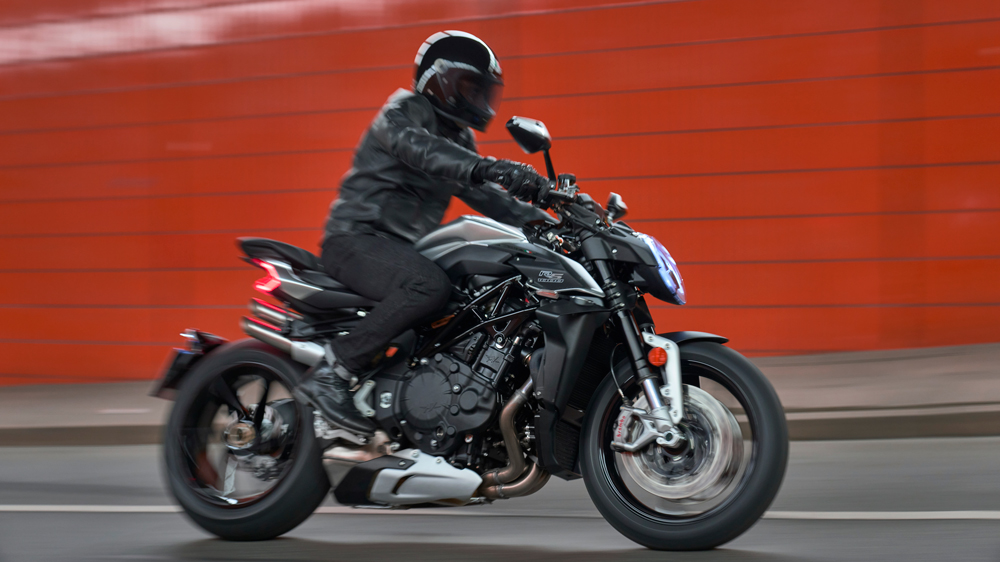 Let’s cut to the chase: The 2022 MV Agusta Brutale 1000 RS is nearly unnecessary for anything other than going fast . . . very fast. With a claimed 208 hp at your disposal, the $26,600 model variant is mechanically similar to the $33,800 Brutale 1000 RR, a machine we reviewed back in January and found just too brutal for its own good. But there’s been one concession that makes the RS a better streetbike than its sibling—the class-standard, single-piece handlebar.

Perhaps we’re getting on a bit in years, but the RR’s clip-on handlebars made for a rather uncomfortable riding position. The RS’s traditional single-handlebar configuration might not grab attention like the RR’s, but looks will be the least of your worries after you jump off from an hour-long ride and don’t feel the need for a massage therapist.

As far as the engine and chassis, the two Brutales are fit with the same inline-four mill. (The limited-edition Brutale 1000 Nürburgring has an inline-four as well, but its output is bumped to 212 hp when fit with the respective race kit). The RS, however, gets new throttle mapping that helps to somewhat alleviate the dreaded flat spot at 5,000 rpm, an issue that plagues the RR.

The RS still delivers a drop in drive at 5,000 rpm but, overall, it’s nowhere near as bad as it is on the RR. And once you clear the next 3,000 rpm, it’s time to clench harder on those handlebars because the RS will leap into the horizon at a fantastic pace. Lightweight titanium conrods and radial titanium valves mean the Brutale’s motor spins up with impressive speed, so it’s just as well that you’re a little more comfortable with that single-piece handlebar as you start throwing gears.

Yet the annoying trait of MV Agusta “throttle hunt” is still present, meaning that light throttle applications, like the ones made in stop-start traffic, are not always met with consistent fueling. This is a motor that only truly works as prescribed when the throttle is wound right back and great dollops of air are being fed into its internals. Euro 5 emissions laws have much to do with MV Agusta’s fueling plight, but given the sticker price of the RS, this is something the company needs to sort out, and quick.

The ride itself is a stiff one thanks to the massive, conventionally adjusted 50 mm Marzocchi fork and Sachs monoshock. Compared to the RR’s all-electric Öhlins setup, the only electronic in the RS’s suspension/chassis department is the Öhlins steering damper, which does an admiral job of keeping the front wheel on the straight and narrow, especially when under hard acceleration. Stiff as it is, the RS’s chassis makes the bike brilliantly nimble, allowing the rider to dart from corner to corner at a whim. And that stiffer suspension ensures the bike goes exactly where the rider asks, if at the expense of a little comfort.

As for the electronics, you get everything from four individual ride modes and a six-axis inertial measurement unit (IMU) to adjustable traction and wheelie control, cruise control and cornering ABS, so you’re well cared for in the safety department.

Race mode is simply too abrupt in the throttle for our liking and seemed only to exacerbate the fueling issue. Switching to Sport made for more pleasurable operation and hardly seemed to dilute the ride experience at all. Although the RS is a brutally fast and uncompromising bike, it seems to grow some manners in Sport mode.

The MV Agusta Brutale 1000 RS is an exceptional machine but still feels a little raw. The fueling issue and other annoyances, such as the rear footpegs not being able to fold away (like they do on the Dragster), detract a bit from the ride. The base is there, it’s just that the recipe needs fine-tuning.