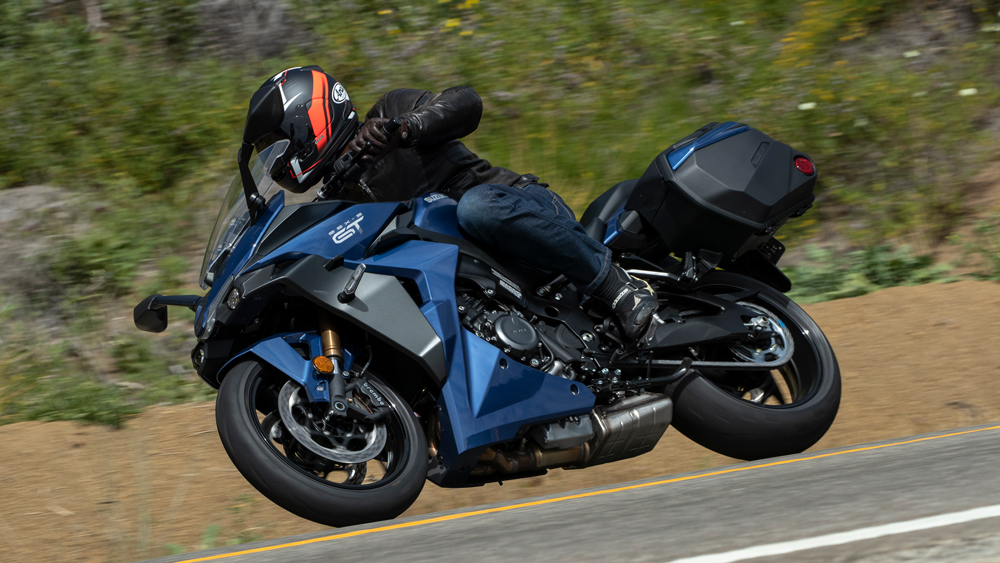 The casual observer could be forgiven for assuming Suzuki was all but finished following the Covid-19 pandemic. Sure, there was the update to the benchmark Hayabusa sportbike last year, but no new street bikes debuted in 2020 or 2021. That, however, is finally changing. Already this year, Suzuki has released three new motorcycles; well, the same one dressed up three different ways.

A couple of week ago we tested the Suzuki GSX-S1000 naked bike, a model that delivers solid performance, but has a few flaws. Now, we have just finished riding the sport touring version in the GSX-S1000GT+, a $13,149 motorcycle that pleasantly surprised even this jaded rider. The little “+” sign at the end of the name hints at this being the premium of the two GT variants available, but in truth, the only difference is a set of roughly 43-gallon side cases and another $650 added to the price.

Under the skin of the expansive yet tightly wrapped bodywork sits the same 149 hp, 999 cc inline four-cylinder engine (with 78 ft lbs of torque), twin-spar aluminum chassis and fully adjustable KYB suspension as on the GSX-S1000 naked bike. The GT+, however, is aimed at comfortably covering distances that its sibling could only dream of, thanks to taller handlebars, a wide screen—deflecting a massive amount of wind at speed—and cruise control, something that is sorely lacking on the GSX-S1000.

Another differentiator on the GSX-S1000GT+ is Suzuki’s first-ever integration of a thin-film transistor (TFT) display. Yes, Suzuki finally arrived at the TFT party, albeit years after everyone else, but has done quite a good job with it. This dash is mission control for the ride, and although the bike doesn’t have an Inertial Measurement Unit (IMU) nor lean angle–sensitive traction control or Cornering ABS to adjust, the 6.5-inch screen is at least easy to understand and readily pairs with your smartphone via the left switchblock. It’s a mile ahead of the Gameboy-like unit found on the GSX-S1000.

Once you’re up and rolling, you’ll be met with that lion-like induction roar this motor is famous for. The power plant is a descendant of the one found on the GSX-R1000 K5, one of our selections for the 25 Greatest Motorcycles of the 21st Century (So Far). It’s got so much mid-range torque that it makes for a totally engrossing ride experience, and it’s matched to a splendid quickshifter that’s one of the best in the business right now.

To be back in the saddle of a somewhat analog motorcycle is rather refreshing in this day and age of electronic suspension and Cornering ABS. This bike’s KYB suspenders are divinely old school—springs, shims and oil, not pneumatics or electronics guiding their path. As such, the rider gets a lovely, mechanical feel at the handlebar, not one fettled by outside servo motors.

With cruise control, taller handlebars and a wide screen that deflects a massive amount of wind, the bike is the model line’s best for covering longer distances.  Kevin Wing

The GT+ loves to get after a twisty road just as much as it does a freeway, probably more so. Selecting B mode (rather than A or the lower-output C mode) for the throttle, I find the Suzuki’s power delivery is silky smooth—the A mode is too abrupt for my taste—and canyon roads are the perfect place to let the GT+ do its thing.

Clicking up through the gears elicits an impressive soundtrack punctuated by a barky exhaust note as the bike offers more than enough power to keep even the most skilled riders entertained. And it’s all wrapped in a rather distinguished suit. Overall, Suzuki’s GSX-S1000GT+ is a vast improvement over the GSX-S1000 naked bike, delivering all the thrills with no unnecessary frills.