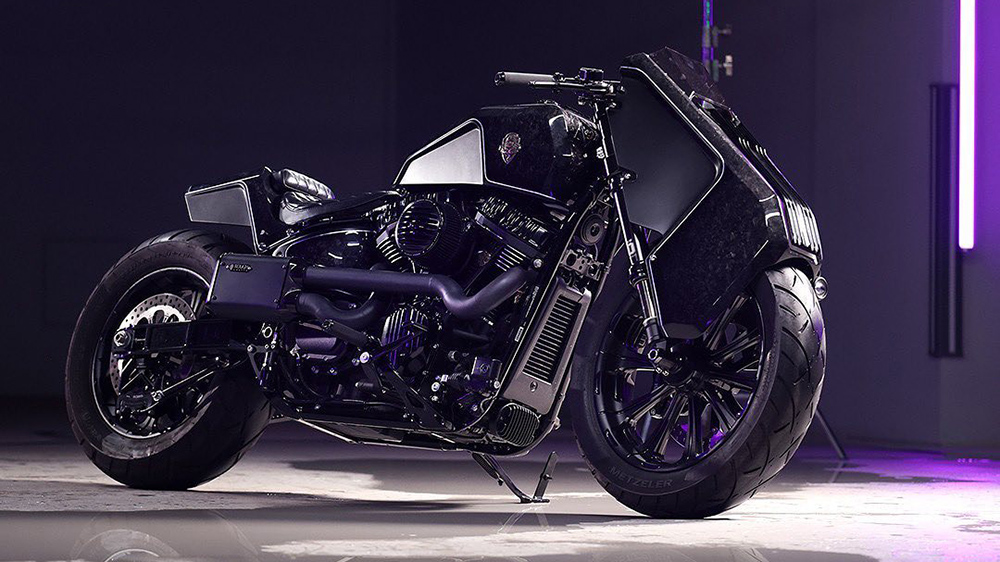 Rough Crafts just went and turned the Harley–Davidson Street Bob into something out of a big-budget sci-fi game.

The one-of-a-kind ride, aptly christened Cosmos Charger, has a decidedly futuristic aesthetic akin to the motorcycles of Cyberpunk 2077. It’s just missing Keanu Reeves in the saddle.

The Taiwan-based shop built the bike in honor of Cooler Master’s anniversary, according to Bike Exif. The computer hardware company, which makes cases, coolers and other accessories, has chalked up three decades in the tech business. What better way to celebrate, eh?

The Street Bob is one of Harley’s more stripped-down models, so Rough Crafts’s Winston Yeh took the opportunity to really go wild. The Cosmos Charger has been finished almost entirely in black save for some exposed carbon fiber. All of the curves have been squared off to create a delightfully boxy silhouette. The bike’s also been fitted with an angular cowling, which all but rids it of any of the original’s retro flair. The menacing black is broken up by purple lighting and silver Cooler Master badging.

Rough Crafts didn’t just change the bike’s shape and paint job, though. It also equipped the two-wheeler with a set of new Öhlins forks and shocks, a swingarm from The Speed Merchant and Performance Machine wheels wrapped in Metzeler ME888 tires. The Milwaukee-Eight 114 engine, which can produce 100 hp and 119 ft lbs of torque, appears to have been left untouched.

“For their 30th anniversary, Cooler Master asked me to build a bike and matching computer case to celebrate,” Yeh told Bike Exif. “I set out to combine signature elements of both worlds—the brand’s signature purple lighting, and the sharp edges and boxy shapes that are found on most Cooler Master cases. Plus, Rough Crafts’s signature fin details, with lots of forged carbon fiber.”

Unfortunately, the Cosmos Charger is a one-off—for now, at least. Neither Rough Crafts or Cooler Masters have said a thing about selling the motorcycle. You could, of course, commission a bike of a similar nature from the custom shop.