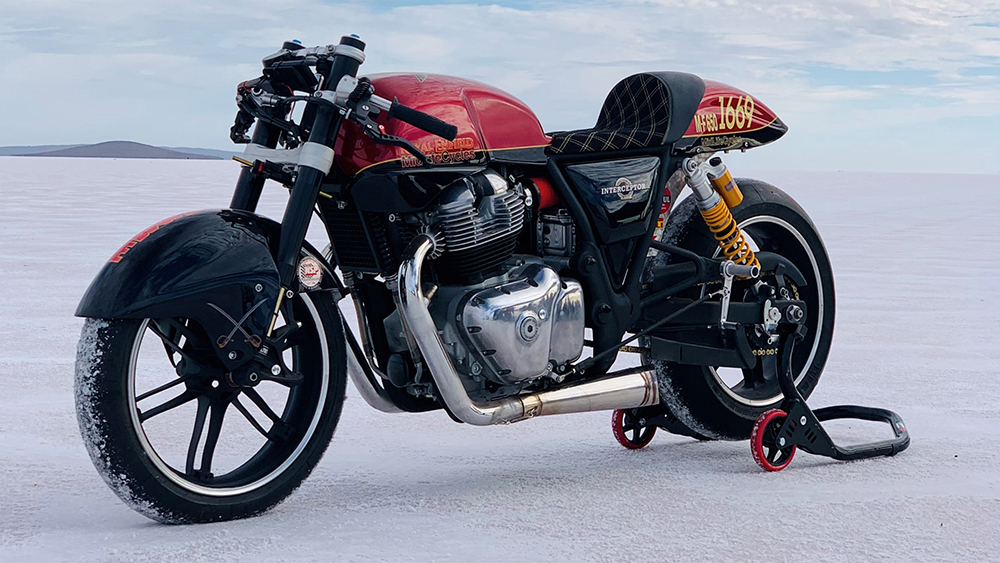 The historical feat was achieved at Lake Gairdner’s annual Speed Week that ran from March 8 through 12, 2021. With first-time salt racer Charlie Hallam in the saddle, the blistering quick two-wheeler shattered the four-year-old class record on all but one of its runs.

Sabre was entered in Class M-F 650 that comprised 650cc motorcycles with no streamlining, running commercially available unleaded fuel. The previous record in this class, which had stood at Lake Gairdner since 2016, had been 119.961 mph. With Hallam punching full throttle, Sabre comfortably eclipsed that on the very first run, reaching 123.178 mph.

A record-breaking day one wasn’t enough for this duo, though. Hallam kickstarted day two by hitting 128.935 mph, followed by a cool 130.204 mph, then rounded out the day by achieving 130.307 mph. Surprisingly, Sabre still had more gas in the tank and the most impressive sprint was yet to come.

The bike was impounded overnight as per the event rules, then busted out again for day three. Under the sinister stormy skies, the salt racer set its best time for the event and soared to a staggering top speed of 133.779 mph. The final record was calculated at 132.050 mph.

The team gathered at the breathtaking Lake Gairdner in South Australia.  Royal Enfield

Royal Enfield says the results are a testament to the Interceptor 650 Twin platform and showcases the flexibility and capability of the bike. Indeed, Sabre sports a traditional twin-loop steel frame that was carried over from the road bike and quite minimal modifications, including Öhlins suspension, lighter alloy wheels, custom front and rear sprockets and a bespoke swingarm.

Sabre’s victory was no doubt made all the sweeter considering her bumpy road to competition. The handiwork of Andrew Hallam (HRA Geelong) and Charlie Hallam (Hallam Cycle Works), the bike was actually built back in 2019 as part of Royal Enfield’s Busted Knuckles Build-Off. It was primed to hit the Salt Flats last year, but the round was canceled due to the pandemic. Looks like good things do indeed come to those who wait.