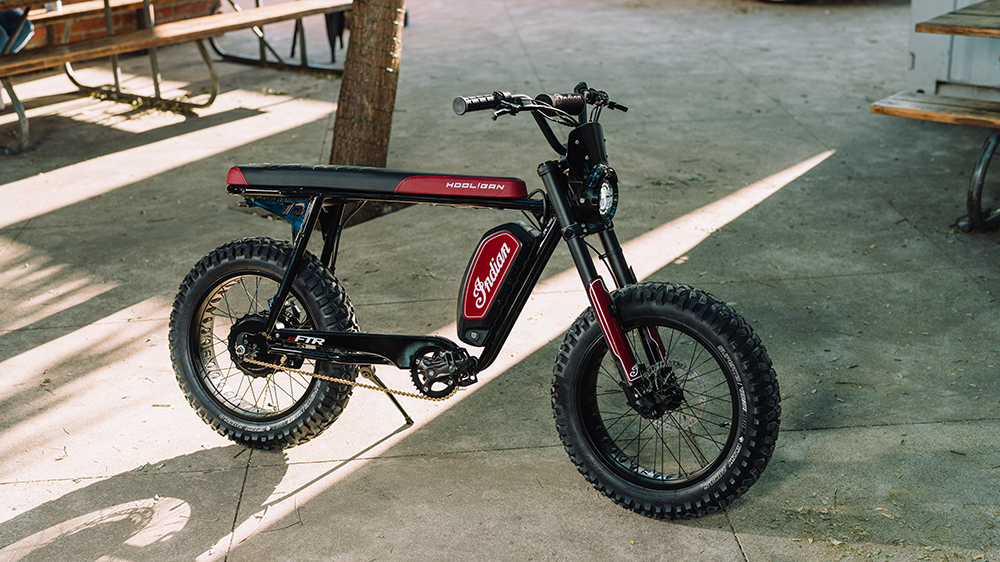 After years of making all-electric bicycles that look like old-school dirt bikes Super73 has decided it’s time to team up with an actual motorcycle manufacturer.

The Irvine, Calif.-based brand has joined forces with Indian Motorcycle to launch its latest bike, the eFTR Hooligan 1.2. The new bike may lack the oomph of a full-fledged motorcycle, but it doesn’t require a special license to ride and features several callbacks to Indian’s rich, 121-year history.

The Hooligan is based on one of Super73’s most popular models, the S2. Both bikes have the same durable aluminum frame, but Indian has helped turn the newer model into something much more striking. To do this, the company took inspiration from its FTR motorcycle line and added an inverted, telescoping front fork and moto-style handlebars, discarded both fender, moved the battery pack from the top tube to the down tube and extended the seat. It’s also been done up in the motorcycle maker’s trademark black and red and adorned with its script logo. The resulting bike I easily one of Super73’s sportiest models yet.

While Indian helped rework the design, it appears to have left the drive unit alone. The bike is equipped with a 960-Wh removable battery and a rear-hub motor that can generate up to 2,000 watts of power. Thanks to this setup, the Hooligan 1.2 can hit a top speed of 28 mph (even off-road), and has more-than-acceptable 75 miles of pedal-assist riding range. Other features include front and rear disc-brakes, so you have all the stopping power you need, and 20-inch wheels

“As a company that lives and breathes life on two wheels, everybody at Super73 appreciates the significance of Indian Motorcycle’s history, as well as its triumphant return and success in recent years,” Super73 co-founder Michael Cannavo said in a statement. “And that’s why we’re honored to align our brands with the introduction of the eFTR Hooligan 1.2.”

Super73’s latest e-bike will go on sale later this spring. It’ll cost $3,999 and will be available exclusively at Indian Motorcycle dealers across the country.