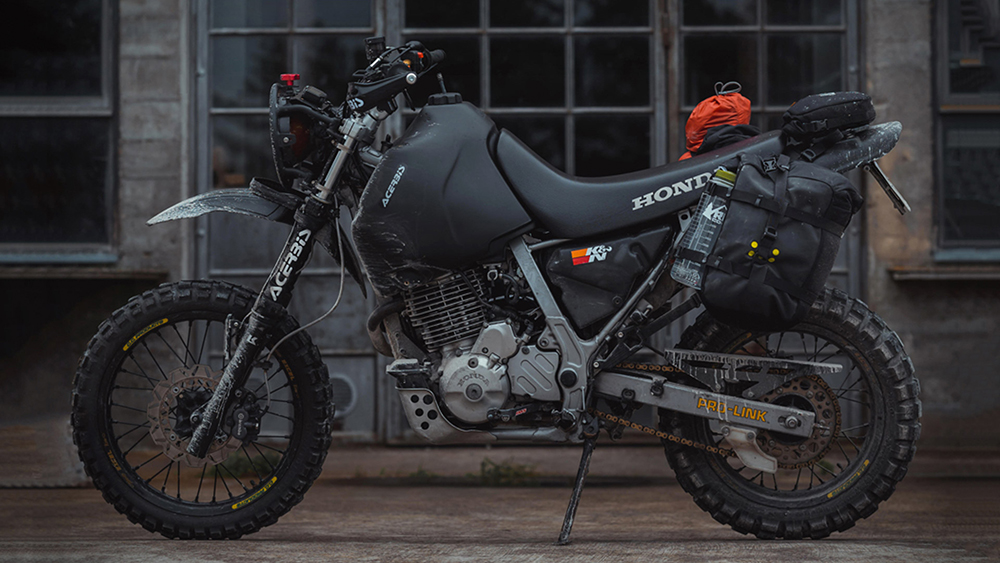 Gorm Taube may be a graphic designer at Volvo by day, but he’s also a highly skilled bike tinkerer in his downtime—that is, if his latest project is anything to go by.

The Swede has managed to turn a humble Honda NX650 Dominator into a badass dirt bike primed for adventures. The designer first bought the two-wheeler in 2015 as a daily commuter but was soon inspired to tweak it for off-roading.

“There is something so aspiring in the ability to go wherever you want and not have to stop just because the road gets rough or the weather doesn’t want to cooperate,” Taube writes on his website.

The painstaking five-year project started with a basic cleanup. Taube unbolted all unnecessary parts, like the original’s pronounced mirrors and oversized taillight, to give the bike a sleek, pared-back feel. A tougher-looking RTECH Supermoto front fender and new Renthal handlebars were installed, while the square headlight was replaced with a classic round unit for a Steampunk twist.

Taube kept the original 644cc single-cylinder four-stroke engine but equipped a new Mikuni T40 carburetor and an aftermarket ECU. He also took a new Yoshimura slip-on exhaust originally made for the Honda XR650L and modified it slightly to fit inside the frame of the NX.

The bike’s suspension got a complete overhaul. Taube added a new rear shock and new internals up front which he says has greatly improved the bike’s handling. In fact, he even took the two-wheeler on a 10-day trip through the Alps to Milan and had no issues.

Taube wrapped the bike in matte black to cover the ‘80s graphics and affixed the latest digital instrumentation from Trail Tech, along with low-profile LED indicators and custom mounts for saddlebags.

“This bike is the purest form of adventure bike there is: simple, tall and fairly light but still packs a punch,” he writes. “This bike is really meant to be ridden and abused, the scratches and dents will tell the stories of this bike.”

Indeed, the biker said he recently lowsided on a gravel road and the topple exposed some new areas that need to be adjusted. Gotta love a perfectionist.