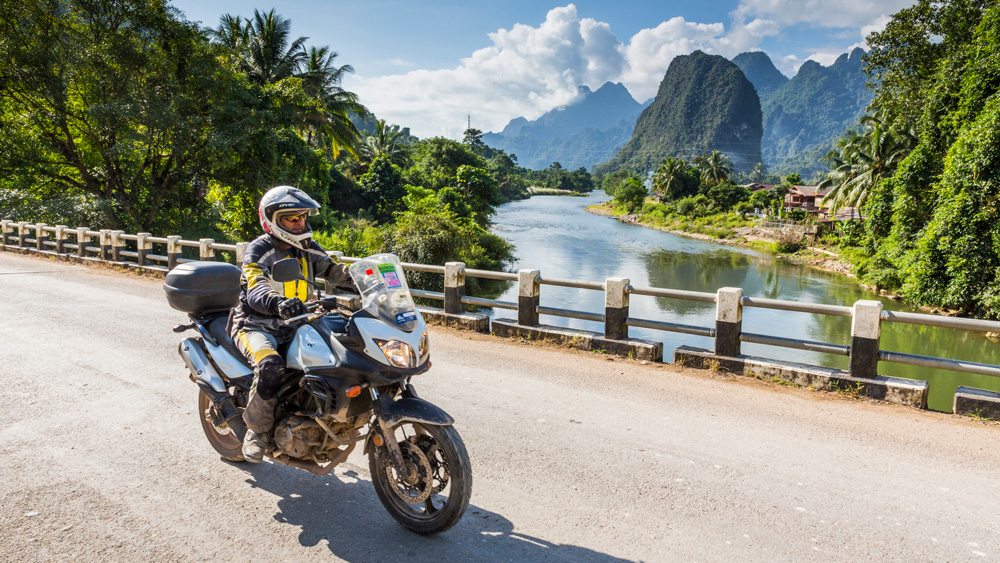 Traversing the unexpectedly smooth roads snaking their way through the jungles and mountain passes of Northern Thailand, I repeatedly find myself entranced by an uncanny mix of adrenaline-induced riding and breathtaking scenery. The days hold an engaging combination of concentration to keep pace with my fellow two-wheel adventurers while absorbing the stunning backdrop and exotic allure of Southeast Asia. This is the essence, the pleasure and the magic of Edelweiss Bike Tours’ Thailand Extreme experience.

As the name implies, the Extreme series of tours offered by Edelweiss (one of the world’s leading motorcycle tour operators) combine serious riding and plenty of miles per day with immersion in the local culture. The Thailand Extreme adventure—starting at $3,670—is intended for experienced riders, offering up relatively demanding routes with some challenging segments and a pace that tends toward the quick.

Starting and ending in Chiang Mai (“new city”), Northern Thailand’s largest city, the tour eschews the all-too familiar focus on the country’s raucous nightlife (think Bangkok) in favor of the more genuine and serene aspects of the area’s natural beauty, with the north possessing a series of breathtaking mountain ranges. The roads that weave in, over and through the latter make a motorcycle the most freeing mode of travel here.

Edelweiss offers several bikes to choose from, with the Suzuki V-Strom 650 being the most popular selection. And for good reason. The V-Strom has a superb combination of mechanical and physical elements that seem tailor-made to the route. The 645 cc 90-degree V-twin engine provides good low-end torque with forgiving delivery, perfect for the region’s hilly, winding and often extremely tight roads. Weighing in at just 476 pounds, the V-Strom rewards with maneuverability while also being easily manageable on the occasional dirt section or when slow navigation is required through remote villages. Suspension components continue the V-Strom’s accommodating nature, offering up a plush ride with impressive responsiveness.

On the first day, after clearing the congested—albeit relatively polite-mannered—morning commute of Chiang Mai and entering the tranquility of the surrounding countryside, we ascended into the nearby mountains. In short order, we were winding our way past rice paddies and grazing water buffalo. My assumptions of rutted, dirt strewn Third World byways proved completely erroneous, immediately supplanted by the reward of smooth, clean road surfaces with beautifully sweeping turns—as if commissioned by a motorcycle enthusiast employed in public works, then paved by a team of two-wheel sporting minds. The result is that Northern Thailand is quickly earning a reputation as a popular motorcycling destination.

The Thailand Tour is a perfect example of how Edelweiss—approaching its 40th anniversary—carefully chooses the routes during lengthy scouting trips, which not only source out the most engaging roads, but plenty of opportunities to learn about Thailand’s history and its people, all while sampling the country’s famous cuisine and hospitality.

This eight-day journey (which includes an optional rest day in Nan) covers 1,465 miles and includes stops at various points of interest; ornate temples, the Golden Triangle (the point where Thailand, Cambodia and Laos convene), the Mekong Delta, an elephant training center, coffee plantations and an especially intriguing longboat river run to a remote Burmese village where the “long neck” women live. I first saw this unusual practice of women elongating their necks—by adding brass rings—in National Geographic as a young boy and never forgot it. All these years later, I was able to witness it firsthand. At the village school, we met two young girls who are following in their tribe’s tradition. They began the process of adding rings at age five and will continue until they are 35 years old.

The first five days of the tour are a comfortable mix of riding and sightseeing and, as it turns out, act as appropriate preparation for the final days where we ride the much anticipated and famous, “Road of a Thousand Turns.” As the name implies, the day is one long string of cornering exercises that will keep your throttle and clutch hands busy, working in concert with myriad gear changes and copious use of the brakes to deliver an endless rush that will likely set the bar for most riders. Tight and technical, fast and flowing, descents and climbs, this road has it all, with excellent banking to accommodate the exciting pace. The day ends in Pai, a famed hippie hangout crowded with tourists seeking intoxication on cheap beer under dizzying disco lights—a pursuit that pales in comparison to the thrills we fortunate few have just experienced.

The first five days of the tour are a comfortable mix of riding and sightseeing.  Photo by Alexander Seger, courtesy of Edelweiss Bike Tours.

After testing our mettle on the Road of a Thousand Turns, and just when we think it couldn’t get any better, the agenda for day seven includes the Road of Two Thousand Curves, which skirts the jungle border with Myanmar, before arriving (thoroughly exhausted) in the village of Mae Sariang. This day of intense riding represented the first time in my 48 years of motorcycling where I actually thought to myself: “When is this going to end?”

After returning to Chiang Mai, we hand our trusty steeds back over and settle in for a farewell dinner where each participant shares memorable moments.

By the end of the tour, the things that had first seemed odd now seem normal, such as the abundance of village dogs napping in the middle of the road, unfazed by the passing roar of engines, the only reaction being a lazy wag of the tail. Or the ramshackle roadside eateries with some of the most amazing Thai cuisine, and all cooked over a single hot plate. Or the elders who proudly make a gift of the bananas they’ve grown. But perhaps the most endearing aspect I took away from the experience is the Thai people’s gracious greeting and parting—clasping the hands together as if in prayer augmented by a gracious bow. When reciprocating this gesture, I was always rewarded with a genuine smile. It’s a smile that will cross my face every time I think of how the Thailand Extreme trip revved-up my spirit with bucket-list riding, cuisine, topography and cultural immersion.

US passport holders are granted a visa-free 30-days (with 6-months available beyond stay). Also, there are no vaccine requirements.

Edelweiss offers packages for motorcycle insurance and the majority of costs are covered in the tour price.

Thai traffic drives on the left. Traveling with a guide in the lead prevents confusion for those who have only ridden Stateside.

Cathay Pacific Airlines has a convenient flight from Los Angeles to Hong Kong (15-hour flight with 2-hour layover) and then the final leg (2.5 hours) to Chiang Mai. The night flight makes adjusting to the 15-hour time difference and residual jet lag a great deal more manageable.

Edelweiss uses the Viang Thapae Resort in Chiang Mai as the start and end points for the Thailand tour. The resort is located downtown, just a ten-minute cab ride from the airport, and allows for easy access to the city’s many sights and nightlife, yet has a tropical, quiet country feel once inside its grounds. Arrive a few days early to acclimate to the time difference before saddling up for the tour.