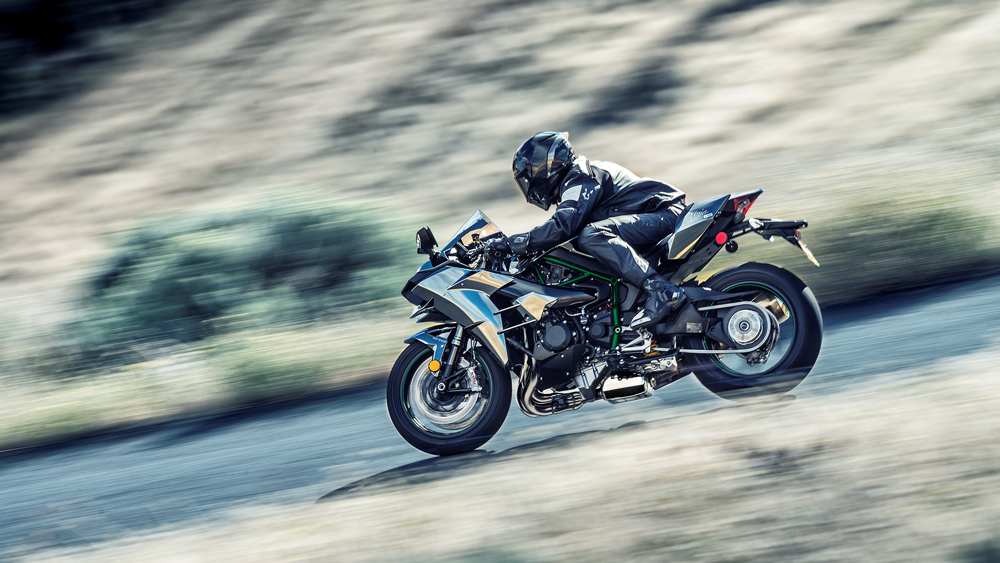 If there’s one motorcycle that signifies the excess of the technological age, it’s Kawasaki’s Ninja H2. This silver-and-green bullet, first released to a salivating public in 2015, is the only production motorcycle to feature a supercharger—and it’s bolted to a motor which, on its own, would qualify as a superbike-spec unit in the 998cc, inline, four-cylinder.

Those eye-wateringly large power numbers put the Ninja H2 firmly in the lead of the hyperbike category. And the fact it’s packing a supercharger makes the machine all the more unique, especially when you consider its nearest rivals are traditional inline fours such as Kawasaki’s own Concourse/ZZR1400 and Suzuki’s legendary Hayabusa.

Final stateside specifications for the 2019 Kawasaki Ninja H2 have yet to be released.  Photo: Courtesy Kawasaki.

Another factor that sets the H2 apart is the fact that Kawasaki claims the paint will heal light scratches on its own. Despite sounding like a rather aspirational sci-fi film claim, Kawasaki explains that the Ninja H2’s mirror silver overcoat is actually called Highly Durable Paint and features a special coat which contains soft and hard properties that work together like a chemical spring, allowing light scratches to repair themselves over a week or so after the damage occurs.

Keep in mind, though, that the bike isn’t covered in magic paint that will fix any and all dents; Kawasaki notes that deep gouges from the rider’s zipper, or (heaven forbid) keys will necessitate proper expert paint treatment. And this, we can assure you, will be far from cheap.

Kawasaki was unable to confirm when the H2 will land in the United States, but once it does, we’ll be there to tell you just what twisting the grip on one of the world’s most powerful street motorcycles feels like.