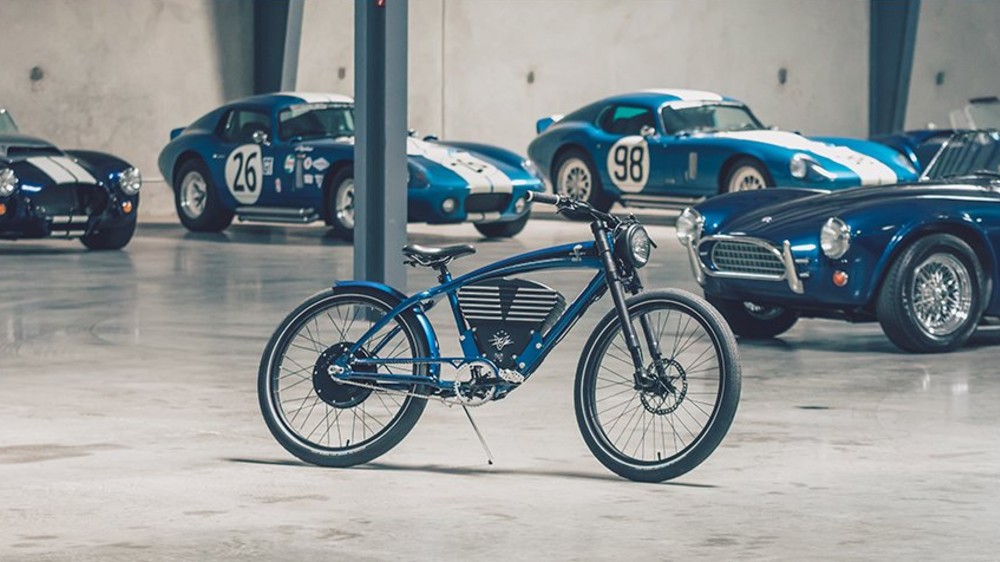 The Shelby Cobra is back. And while that is reason enough for celebration, it’s unlikely anyone predicted that the legendary sports car would make its return as… an electric bicycle.

Later this month, Vintage Electric will release the limited edition Two-Wheeled Cobra, a powerful throttle e-bike inspired by Carol Shelby’s 289 Slabside. With an aesthetic that closely echoes the storied ‘60s hot rod, the bike also happens to be Vintage Electric’s most powerful yet.

Designed with the help of Shelby’s grandson Aaron, the Two-Wheeled Cobra hews closely to the original car’s race-ready aesthetic. Featuring a motorcycle-like profile, the bike is painted in the same metallic blue with black racing stripes as its namesake. But that’s not where the design nods stop. The bike also features hand grips, a matte black fork, retro LED headlamp and leather saddle seat that all callback to the 289 Slabside. And, of course, there’s the iconic Cobra logo to top it all off.

But the Shelby legend isn’t just built on ultra-cool aesthetics. His cars were powerful beasts that could conquer even the fiercest of competition, most notably when the Ford GT40 he designed bested Ferrari at the 1966 24 Hours of Le Mans. While e-bikes are starting to seem more like motorcycles than traditional pedal-powered bicycles, few more so than the Two-Wheeled Cobra. Featuring a 48-volt (1123 watt-hours) battery and rear-hub motor, the bike can reach a top speed of either 20 mph in street mode or eyebrow-raising 36 mph in optional, key-operated race mode. Even more impressive—its powerful battery, which can be fully charged in just 4.5 hours, gives the bike a 75-mile range.

The bike will be released on Friday, November 15, the same day that Ford v Ferrari, a movie that immortalizes Shelby’s greatest automotive feat, hits theaters. While the release may still be more than a week-and-a-half away, interested customers can reserve theirs online now. The bike will cost $7,249, though the key-operated race mode will cost an additional $149.