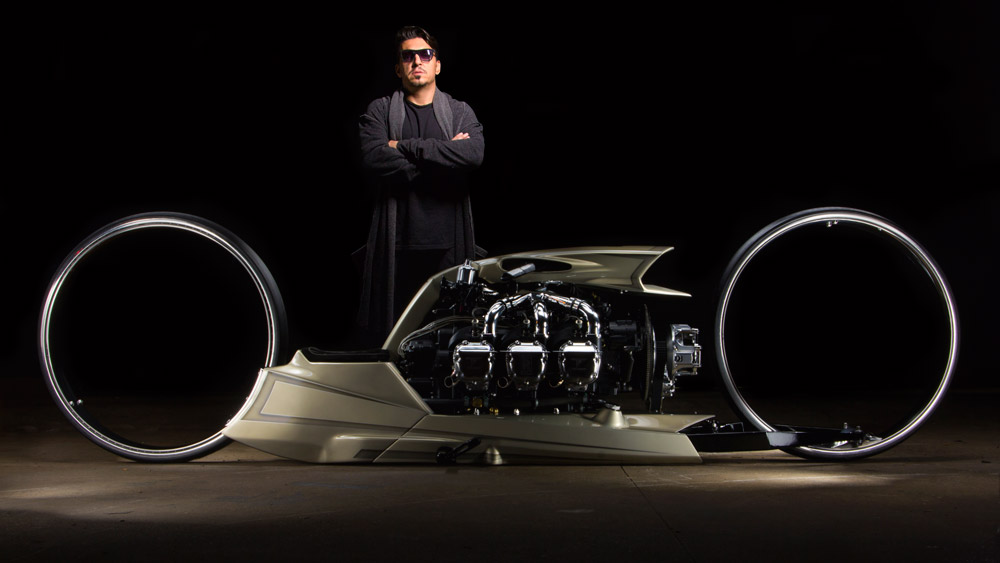 Disbelief was one of the driving factors for retired Formula 1 racer and custom vehicle builder Tarso Marques when coming up with his latest two-wheel wonder. “I wanted a very different concept bike—one that people didn’t think was real,” he says. “It also had to be 100 percent functional and full of engineering solutions never done before.” To say he was successful, is an understatement. The result is the head-turning TMC Dumont, an intimidating transport that Wayne Enterprises’ Lucius Fox might have fashioned for the Dark Knight if Marques hadn’t imagined it first.

But the bike may be too much even for Batman. Forget the standard two- or four-stroke fare; this road rocket carries a Rolls-Royce Continental aircraft engine that packs 300 hp. The choice of propulsion system was simple, according to Marques: “The TMC Dumont deserved something really unique and powerful, and with a great sound and look. A normal motor would be so boring.” The carbon-fiber-and-aluminum one-off rolls on disproportionately wide 36-inch wheels. Sans hubs, the wheels lend a sense of levitation to the presentation and fittingly enhance the overall design’s flying-machine motif.

The project, however, was slow to take off. “I dreamed of that bike for more than 15 years but could not get the exact engine I wanted,” says Marques. Once the right six-cylinder centerpiece was sourced, though, the motorcycle’s construction—at his shop in Brazil—spanned seven months. “Every single piece was a challenge, but I knew that the concept would work perfectly,” he states. His reasons for confidence were confirmed when it was named Best of Show at multiple competitions during this year’s Daytona Beach Bike Week in Florida.

Although Marque’s does not have plans to sell the TMC Dumont at the moment, any who are interested in commissioning a new bike from the creative builder can correspond with him directly at contato@tarsomarques.com.