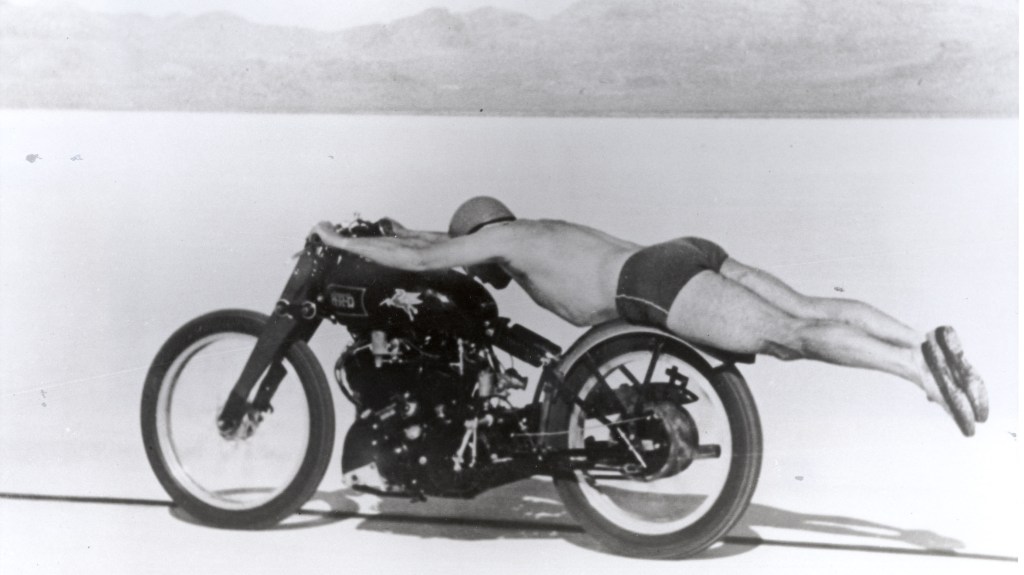 There’s no denying the power of the black-and-white image—a man clad in swim trunks and sneakers lying  at across a speeding motorcycle, his head down and his feet dangling far past the back wheel.

The man was Rollie Free, and the 1948 picture shows him setting the American motorcycle land-speed record of 150 mph (it has since been broken many times, including by Free himself two years later). There is arguing about the bike, however. Some say it’s a Vincent Black Shadow; others claim it’s a Vincent Black Lightning.

While the Vincent Black Lightning shares its lineage with the Shadow, which Hunter S. Thompson immortalized in his 1971 novel Fear and Loathing in Las Vegas, it’s a legend in its own right. Built between 1948 and 1952, the Lightning was the racing version of the Shadow, and it was the fastest production motorcycle of its era. Vincent built fewer than three dozen Lightnings, and of those, 19 matching-numbers examples survive.

Less than a year after its triumphant Las Vegas auction, Bonhams will offer another matching-numbers Vincent Black Lighting on October 6, 2018, in a sale at the Bar- ber Vintage Festival in Birmingham, Ala. The January auction record convinced the owner of this 1949 motorcycle to consign.

Estimated at $400,000 to $500,000, the bike Bonhams will sell in October is not the first Vincent Black Lightning, but it is the earliest example with matching numbers. Like the one offered in January, it’s had  five owners total. Bidders who sit out this opportunity might be looking at an unknowably long wait. The last Vincent Black Lightning to appear at auction before 2018 came up a decade ago, also at Bonhams.

Will it beat the record? It’s impossible to say. This much is clear, though: The Vincent Black Lightning still captivates the imagination, and its legend is forever enmeshed with that gripping photo of Free rocketing into history.

A Brief Timeline of the Vincent Black Lightning