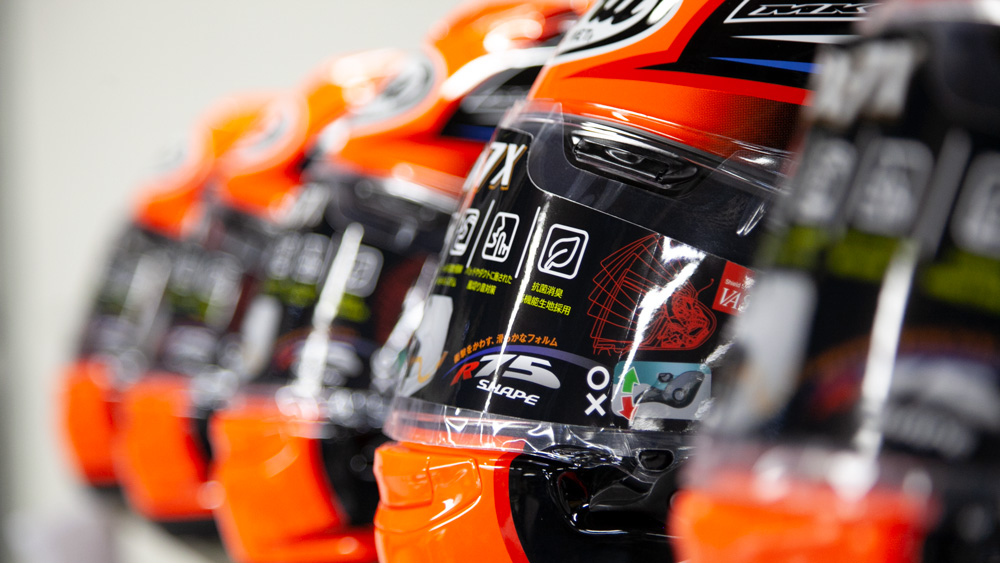 Mitchio Arai is a man with boundless enthusiasm. The 81-year-old president and CEO of Japan’s iconic Arai Helmet company guides us on a tour through his workplace of the last 60 years in Ōmiya-ku’s business district, about an hour outside of downtown Tokyo. You can tell he’s just as invested—if not more so—in the craft of helmet design and construction as he was when he first returned from a US education in the mid-1960s.

“For not just me, but my company, protection has become an obsession,” he says, sitting in the shadow of a photo of his father Hirotake, seen standing atop a Harley-Davidson. It’s an admittedly corny, almost marketing-like comment, but the conviction in his eye renders it fact.

A family-run business with no shareholders and 400 employees, Arai Helmet will soon be in the custody of Mitchio’s son, 45-year-old Akihito (who looks no older than 25), whenever Mitchio decides to step down. Arai protect the brains of some of the world’s finest riders and drivers, each with a helmet originating from one of four facilities in Ōmiya-ku, the major manufacturing plant in Shinto, the Katayanagi assembly plant and another facility at Amanuma.

There are no special concessions given to MotoGP’s Maverick Vinales not available to you or me. Everyone gets access to the same helmets, the same level of protection. An Arai will start its life in the steamy confines of the shell department, where a specially trained employee will lay 20 separate pieces of fiberglass and Arai’s patented Superfiber (30 percent stronger than regular fiberglass but six times more expensive), creating what is known as a preforma.

The fiberglass components that make up the preforma for every Arai helmet.  Photo: Courtesy of Arai Helmet.

Once placed into a cast steel oven, it has resin added and a pneumatic bag inflated, the fiberglass mix is cooked for 15 minutes to reveal an R75 shell, named so as it has a continuous curve radius of no more than 75 mm. The shell’s creator will then put their name on the inside of the piece, ensuring accountability.

The shell will go through an initial inspection, then a second baking, and onto one of the very few machines used in the entire process of making an Arai, that of the laser which cuts out the eye port. From there, the shell goes to the paint department, undergoing 10 to 15 different steps, depending on the model created. And it’s all done by hand.

By the time an Arai is ready for graphics, it will have gained the weight of about four quarter-size coins. And the graphics are laid almost entirely by women, who company management say have more patience and ultimately do a better job than their male counterparts.

Once an Arai is ready for shipping, it will have seen nearly 40 different pairs of hands. From the first laying of fiberglass to the wet sanders, to the ones who push the helmet’s foam EPS liner into place and fit the visor.

The application of graphics is done solely by women.  Photo: Courtesy of Arai Helmet.

“We are not very good businessmen,” Arai says in a completely self-effacing manner. “We understand that many of the processes we do will cost us money, but we believe in them because they are not carried out by machines—they are carried out by our people.”

Helmets can indeed be beautiful, especially given the shape of an Arai, which has been in a continual evolution since the 1970s. But the fact that an Arai has gone through so many people before it saves you from your next crash gives it a special significance.