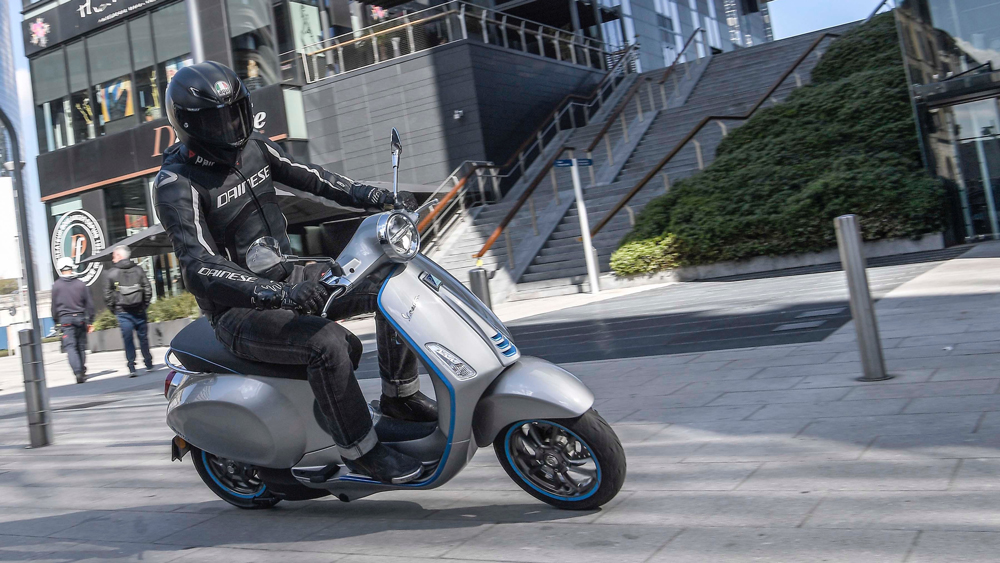 Photo by Milagro, courtesy of Vespa.

The quintessential Italian scooter has gone electric. Vespa, the name that started an international scooter movement in the 1950s—initially with two-stroke and then four-stroke power plants—has thrown its hat into the burgeoning electric ring with the all-new Elettrica.

It’s the first electric transport3.5 for the storied brand from Pontedera, about an hour west of Florence. The Elettrica uses a 4.2 kWh lithium-ion battery mated to a brushless electronic motor that uses a Kinetic Energy Recovery System (KERS), peaks at 4 kW and has an impressive 147 ft lbs of torque at the wheel at zero rpm. The company claims the Elettrica will get you 65 miles of range from a full charge that will take roughly eight hours to attain from a 110V power outlet if the battery goes fully flat. Unfortunately, Vespa does not have a power charger to drop this time down like  Zero Motorcycles does, so if you forget to plug it in on a low charge the night before, you might have to call in sick to work the next morning.

On a full charge, the Elettrica has a 65-mile range.  Photo by Milagro, courtesy of Vespa.

The Vespa Elettrica has been limited to 31 mph to allow it through European moped laws that dictate you don’t need a motorcycle license to operate it. The scooter is designed for inner-city commutes and is far from quick when compared to its petrol-powered counterparts in the Vespa range. The initial jump at the traffic lights (that makes a scooter so appealing) is lacking, and having the machine speed limited is not great, either.

Despite this, the Elettrica is still an enjoyable conveyance. The ride position is comfortable, suspension action compliant, although the front brake was a little spongy on our quick jaunt in the center of Milan. On the connectivity side, the Elettrica has all you could want. You can pair your phone to the dash, make and receive calls via your headset, use turn-by-turn navigation and log your ride data via the Vespa app.

The Elettrica’s Top speed is 31 mph.  Photo by Milagro, courtesy of Vespa.

As this is the first of many electric Vespas to come (at least so we were told on the factory tour), we won’t be too hard on the brand. The first-gen Elettrica is a pretty little scooter, resplendent in sliver and blue, but doesn’t yet have the go to match the show.