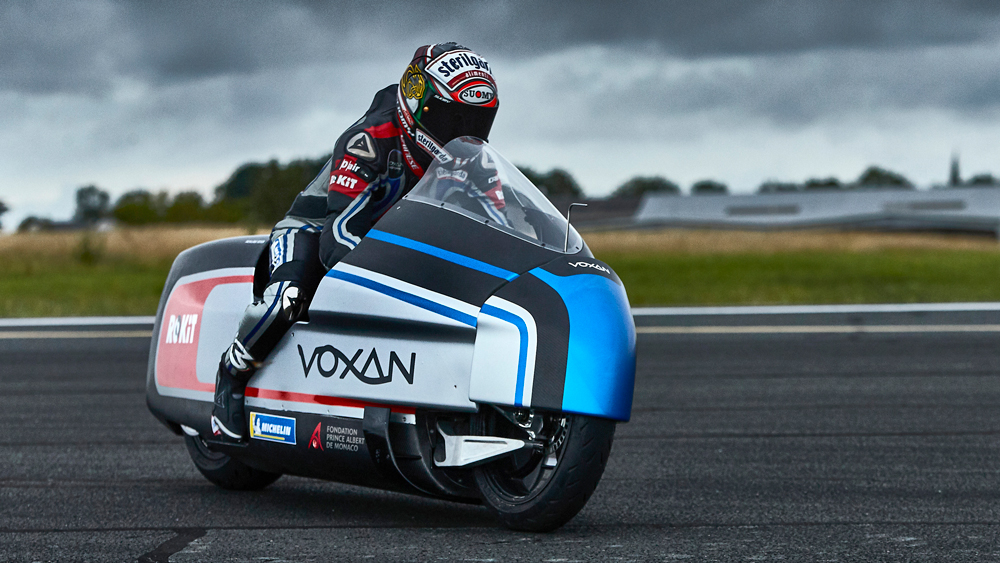 Voxan Motors is aiming to establish a new land speed record for an electric motorcycle with the Wattman, a zero-emissions, single-purpose rocket developed to hit Bolivia’s Salar de Uyuni salt flat in July 2021, a date pushed forward one year due to the global health crisis. The machine, which will be ridden by six-time motorcycle racing world champion Max Biaggi, resembles no street bike you’ll ever ride.

For decades, motorcycle manufacturers and riders alike have been obsessed with going as fast as possible in a straight line. Before WWII, BMW was hammering the competition with its aerodynamic, supercharged racing motorcycles. In 1948, Rollie Free famously peeled down to his bathing suit to shed every ounce of extra weight, laid prone on his Vincent Black Shadow, and set a motorcycle land speed record of 150 mph on the Bonneville Salt Flats in Utah. The principles used by designers and riders to establish speed records in the Motorcycle Stone Age remain the same today: reduce frontal area, minimize aerodynamic drag, maximize power, aim straight and keep the rubber side down.

Prior to being acquired by high-performance electric vehicle developer Venturi in 2010, Voxan—founded in France in 1995—produced 10 models through 2009, ranging from a café racer to a scrambler, all powered by a 996 cc V-twin engine. Sascha Lakic, responsible for Venturi auto design, also designed Voxan’s 2003 Black Magic motorcycle, a rare model in the spirit of other great V-twin sport bikes of the era. But the real focus has been on electric power since the Venturi acquisition.

The Voxan Wattman, initially unveiled at the Paris Auto Show in 2013, has been undergoing development since its debut and is now ready to challenge the existing record of 203.56 mph set by Mobitec’s EV-02A last year. Voxan is aiming for a top speed of 205.05 mph.

Achieving this also requires a machine designed for high-speed stability, and so the Wattman, with a six-foot wheelbase and a total length of almost nine feet, is long, low and fully faired. The carbon-fiber bodywork—as streamlined as a barracuda—allows the rider to stretch out and reduce his frontal area to a minimum. According to Louis-Marie Blondel, who is in charge of project development and also the bike’s test rider, computer simulations are reliable for speeds up to about 150 mph; beyond that is uncharted territory.

The bike can race from zero to 62 mph in 3.4 seconds.  Photo: Courtesy of Voxan Motors.

The architecture of this racer is specific to its purpose, with an aerospace-grade steel frame, aluminum wheels and running gear. The Wattman uses a double-wishbone front suspension rather than a telescopic fork, and is steered by a link and swingarm (not that there’s much steering to be done), allowing the rider to sit further back and thereby lower the center of gravity. And because weight is the enemy of speed, the Wattman has no front brake, assuming the salt flats provide plenty of runoff once the top speed is reached. While there is no parachute (again, less weight), the Wattman is equipped with a rear brake, while engine braking from the electric motor aids the rider in bringing down speed at the end of the run. Tires are critical, and Voxan has partnered with Michelin to develop a special Pilot RS+ that’s grooved to meet FIM rules for speed record attempts, and designed to withstand speeds up to 280 mph.

Without an internal combustion engine, the Wattman requires no radiator or complicated cooling system. But the performance of electric motors—and especially batteries—are compromised by heat, and so dry ice cools the fluid that circulates through the heart of the bike’s electronic circuitry. Voxan’s proprietary battery design, key to the machine’s performance, is a 1,470-cell lithium-Ion battery that delivers 317 kW of nominal power and has a capacity of 15.9 kWh. Its 308-pound weight is nearly 50 percent of the Wattman’s total mass.

That motor is derived from Formula E technology, in which Venturi has played a major role through its commitment to the Championship series. Using a direct-drive transmission with timing belt, the Wattman develops 204 hp at 10,500 rpm, with 147 ft lbs of torque and a zero-to-62 mph time of 3.4 seconds—a figure that is purely academic when top speed is the only number that matters for the Wattman.