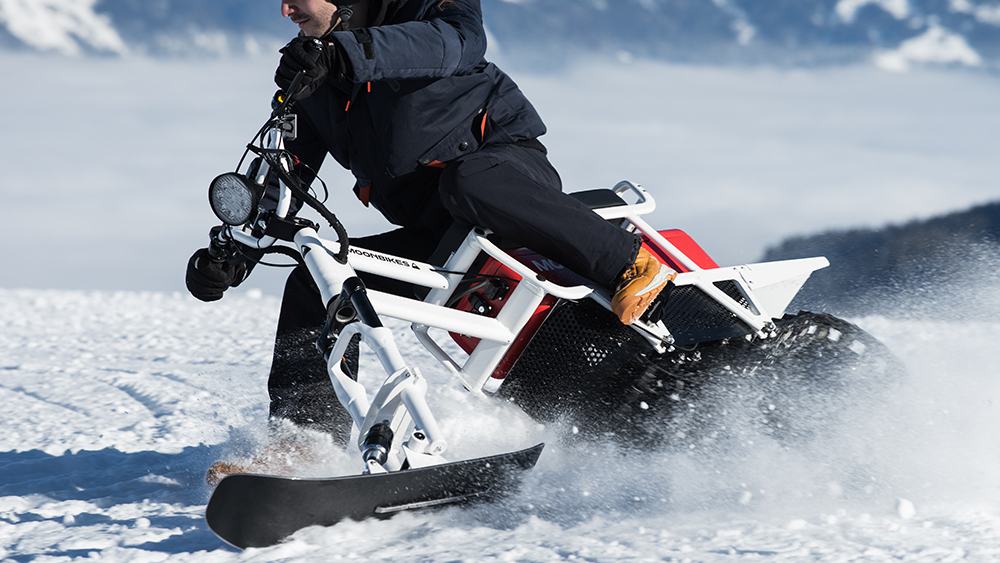 Last year, French startup Moonbikes introduced an electric bike specifically designed for riding through the snow. Following the early 2021 pre-orders, it’s now been confirmed that the world’s first EV snowbike will reach buyers by the end of Q4.

On Wednesday, the company announced that 250 Moonbikes will be delivered to buyers in December. A second batch of the snow cruisers will be available in early 2022, also in limited quantities; these are now available for pre-order.

Created by founder Nicolas Muron, the easy-to-ride snowbike is all-electric and plows through snow silently. The vehicle can even climb 40 percent slopes, support playloads of up to 264 pounds and reach a top speed of 26 mph. With the model the startup aims to target individuals who want to have fun in the snow by blurring the lines of recreation and transportation.

“After three years of research and development, and rigorous testing across the French Alps, we are proud to launch a brand-new category of vehicles, led by an innovative patented propulsion system,” says Muron in a statement. “Snow lovers now have a sustainable and silent alternative without compromising speed, price or autonomy as Moonbikes can run up to three hours with a second battery or up to 1.5 hours with one.”

Assembled in partnership with German engineering company Bosch, the bikes each come with one battery and one charger, but the startup also offers add-ons (including the second battery) for up to $1,800 extra. With its electric powertrain, the compact snow cruiser may not be able to compete with the power range of a traditional snowmobile—but it is much more eco-friendly. And weighing in at just 176 pounds, it is certainly lighter than a traditional gas-guzzler. In fact, the bike weighs less than half that of a classic snowmobile.

The white version of the all-electric Moonbike.  Moonbikes

In October, Moonbikes closed on a $5 million seed round that was led by distinguished US and European investors. The startup has since announced plans to accelerate its commercial development in the US. As a first step, the company plans to hire a team to support its growth and partner with major ski resorts in the US. A similar incentive last winter allowed Moonbikes the opportunity to partner with 12 European ski resorts—including Avoriaz, Courchevel and Val D’isere—to adopt the snowbikes for their facilities.

The US is the largest snowmobile market globally and has seen a 16 percent surge in sales over the course of 2021, according to the International Association of Snowmobile Manufacturers. This increase is also said to be the most significant gain since 1995. With EV sales on the rise globally, we can only imagine how that reported gain will evolve in the years to come.

You can now pre-order your own Moonbike for $8,500 on Moonbikes.com. Available in white and red colors, the electric snowbike’s 2022 shipment is also limited to 250 units.