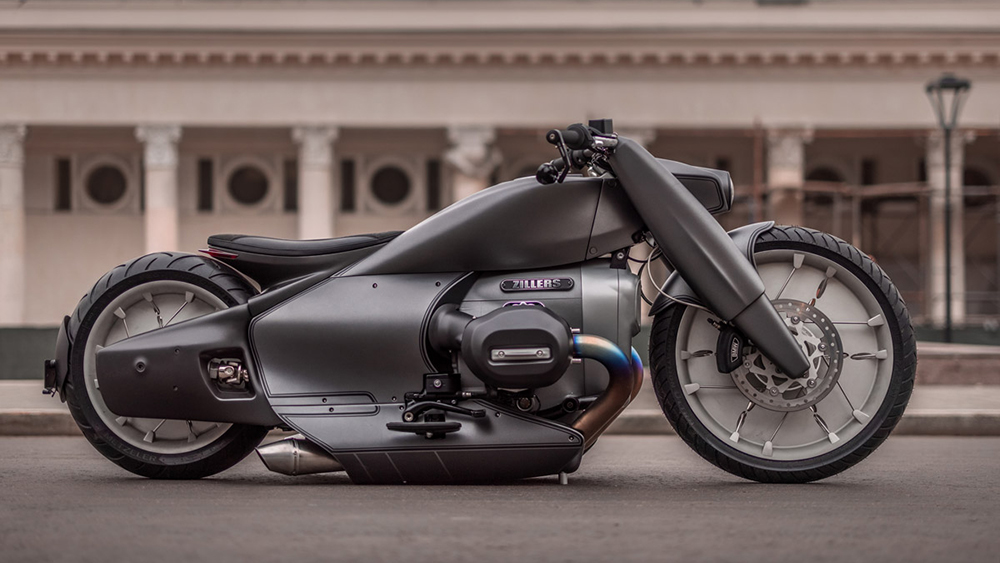 Nobody knows exactly what the motorcycles of the future will look like, but one Russian workshop certainly has a few ideas.

Zillers Garage has just unveiled a design-forward riff on the BMW R18 that eschews the old retro style in favor of a clean, futuristic aesthetic. It comes just one year after the shop rolled out an equally striking custom BMW R nineT motorbike with an outer shell crafted entirely from aluminum.

The no-frills German cruiser has been treated to a full metallic makeover. It sports a sleek, minimalist body crafted out of silver carbon fiber, while the huge rims and decorative spokes were forged from aluminum. The updated exhaust system, meanwhile, was handcrafted from titanium.

The bike’s rims and spokes were forged from aluminum.  Vlad Klepach

The bike rides closer to the ground, too, thanks to the unique air suspension that was developed in-house. Instead of the original’s kickstand, the two-wheeler sports a pair of spikes at the bottom that hold it steady. Elsewhere, the headlight and taillight have been fitted with LEDs and the instrument panel has been moved to the fuel tank.

The result is a sculptural Art Deco ride miles apart from BMW’s design. The only real similarity is the “big boxer.” The bike retains the R18’s 1,802 cc two-cylinder engine, which is the highest displacement boxer that BMW has ever built. It churns out 91 horses and 116 ft lbs of twist for a top speed of 118 mph.

The “big boxer”churns out 91 horses for a top speed of 118 mph.  Vlad Klepach

Zillers isn’t the only garage to have reimagined this beamer, though. Upon release, BMW said its R18 was “predestined for customizing,” and a handful of builders have already heeded that call. You might remember the black beauty that Kingston Custom rolled out in January. Still, Zillers says its particular R18 is a “very special bike.”

To keep it that way, the shop decided to release just 13 worldwide. The Zillers R18 is available completely turnkey or as a kit for self-assembly. The finished motorcycle will take around six months, whereas the kit will be delivered in about four.

As for the price, the bike will set you back $44,900. Although that’s a significant increase from BMW’s latest R18, which starts at $21,495, it seems a small price to pay to be at the bleeding edge.