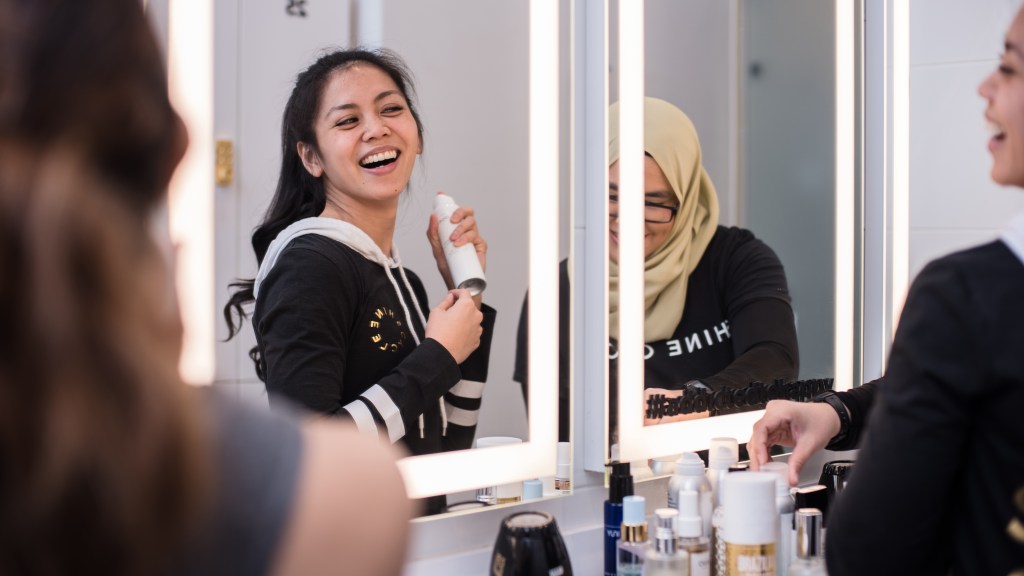 The privacy wall hiding the entrance to Studio 55 is the first hint that this isn’t your average fitness boutique. The second hint: a promotional sign offering three free classes to anyone who holds a valid driver’s license. And then there are the hooks lining the walls in the locker room, draped with abayas, hijabs, and burkas. But once you’re on a bike at Saudi Arabia’s first all-female spinning studio, you’re flying—tapping back, climbing, and sprinting with a room full of strong women.

This unusual crossroad of female empowerment and conservative Middle Eastern mores is the innovative work of Barbara Chancey, founder of the U.S.-based Indoor Cycle Design. Her interior design firm has helped bring cycling and fitness studios to countries where women have often been regarded as second-class citizens. Studio 55—which debuted in Al-Khobar in 2015 and recently opened a second location in Jeddah—was Chancey’s first opportunity to help put Middle Eastern women on bikes. Since then, she has been the creative force behind similar projects in Brunei, Bahrain, Kuwait, and Qatar—all of which have brought cycling studios to these countries for the first time.

(Above) Inside one of Chancey’s cycling studios.

“Once their burkas, robes, and hijabs are hung up, they dance, they shake it—their energy is infectious,” says Chancey.

Chancey discovered indoor cycling herself in the early ’90s, not as a designer but as a student. She fell hard for the rhythm-centric, heart-pounding cardio and eventually began teaching classes of her own. By the early aughts, she had spun her passion for spinning into a new career, designing cutting-edge studios around the world, from Texas to Brazil. But it wasn’t until 2014—when she met Fatima Batook, the founder of Studio 55, at a fitness workshop in Miami—that her work took her to the Middle East.

“[Batook] asked me, ‘Would you be willing to do a studio for women only? Women of any faith? Women in another country?’ ” Chancey recalls. “I said, ‘Of course. Absolutely.’ ”

Studio 55’s success has since created a ripple effect throughout the Middle East. After Saudi Arabia, Chancey designed Exhale Beirut in Lebanon, then Ryde Kuwait in Kuwait City. Last year, she signed on to create Shine Cycle for Princess Azemah Ni’matul Bolkiah of Brunei. And with each new project, she has found a set of local customs and regulations to navigate.

“We get into the culture of a country, to understand what’s appropriate and what’s not,” says Chancey. In Qatar, men and women enter through different doors, and the locker rooms are located on different levels, with separate gender-marked entrances into the studio. In other studios, bikes are spread out for personal space—a stark contrast to the collective mentality of an American sweatbox, but a must for nations where privacy is paramount. And at Shine Cycle, the amenities are particularly lavish: Chanel shower products, ponytail holders cradled in Hermès dishes, and a blow-dry bar (pictured at top). “It’s like nothing we’ve ever seen in the U.S. cycling studios,” Chancey says.

Still, the most gratifying part of Chancey’s newfound niche is helping to bring a powerful outlet to the long-repressed women of the world. “I feel like I’m passing the torch on to the next generation, and that is why I’m so passionate about this. It just takes one pedal stroke.”