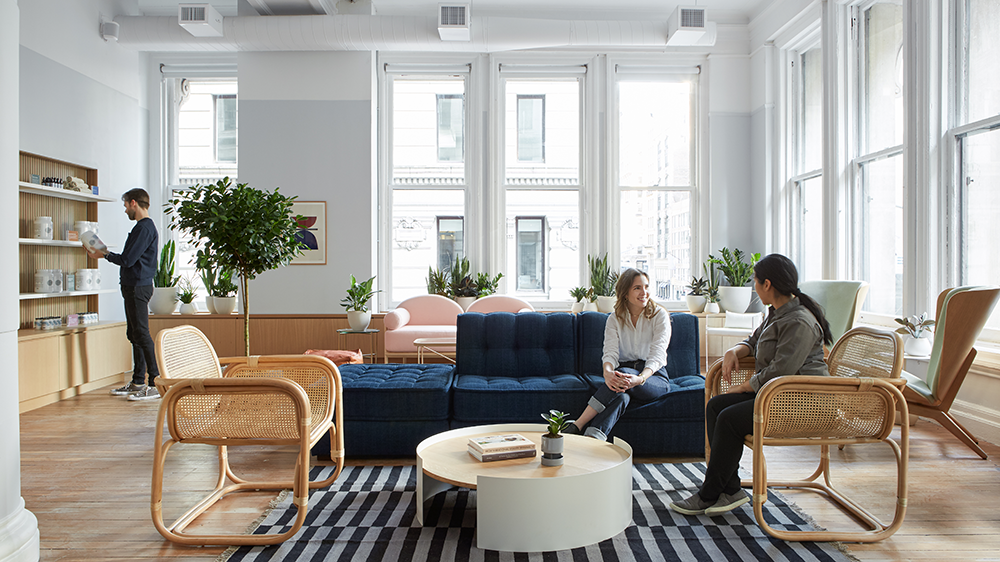 “Most doctors just want to keep you alive—they aren’t helping you live your best life.” Dressed in a colorful bohemian gown with a high neck, her hair swept into a loose bun, Dr. Robin Berzin isn’t mincing words. She’s sitting on a pink sofa in a bright white room in Manhattan’s Flatiron District, addressing a crowd of people (mostly women) munching on vegan canapés and sipping cannabidiol-oil-infused cocktails. “We’re basically just trained to save lives—to prescribe pills and avoid catastrophic events that end life,” she continues. “But we need to be looking at you before you get sick.”

This isn’t exactly your standard doctor’s office visit, but then again, Berzin doesn’t talk like most doctors either. She’s the founder and CEO of Parsley Health, a membership-based medical center that opened its New York flagship in January with the goal of combining traditional medicine with cutting-edge diagnostic testing and wellness best practices for an integrative new approach to health care.

A few years ago, during her medical training at Mount Sinai Hospital in New York, Berzin began to notice what she calls the “revolving door” of healthcare. “Patients traditionally aren’t given enough time to explain their health concerns to their doctors, diagnostic tests are limited and the solution is often a prescription for another pill, rather than an attempt to get to the root cause of the condition,” she says. “I wanted to bridge the gap between medicine and wellness overall.”

If it sounds like Berzin is on a crusade, it’s because she is. The MD, who received her degree from Columbia University’s College of Physicians and Surgeons and also is trained as a yoga and meditation instructor, wants to solve the short-comings of a system that has made the United States one of the unhealthiest developed countries in the world. According to a study published by the Commonwealth Fund, the U.S. health-care system ranked last out of 11 industrialized nations, including Australia, Switzerland, Canada and the UK, with respect to quality of care, access to medical facilities, efficiency and healthy living.

Moreover, most health-insurance models incentivize doctors to see more patients for less time to maximize profits—and shorter consultations have been consistently linked to poorer patient health. A 2017 study by the medical journal BMJ Open reported that most doctors average just above 20 minutes per patient visit.

Parsley’s memberships, which range from $150 to $250 per month, include as many as eight annual doctor visits and eight annual health-coach sessions that combine everything from diagnostic testing and physician recommendations to dietary guidance and wellness protocols. Programs are monitored for progress whether they’re designed to treat illness or fatigue, weight issues or injury.

And it’s all done in spaces that look nothing like the sterile doctors’ offices we’ve grown accustomed to: In the welcome lounge, supplements line one wall, while an open kitchen for culinary workshops lines another; examination rooms are decorated with midcentury modern furniture and colorful artwork.

Parsley isn’t alone. Just a few blocks from Berzin’s new flagship is another health-and-wellness start-up, the Well. Scheduled to open in late spring in a 13,000-square-foot space, it will combine exhaustive wellness offerings (including a 10-treatment-room spa and organic restaurant) with a roster of respected specialists who cover the spectrum, from integrative physicians to a head of Chinese medicine and a director of mindful movement.

The Well’s facade.  Photo: Courtesy of the Well

And then there’s the Silicon Valley version of health-care membership called Forward, which was founded by former employees of Google and Uber, and combines the spartan aesthetics of an Apple store with cutting-edge technologies such as a 3-D body scanner that produces biometric data and a Siri-like screen that “listens” to patient exam visits to present relevant studies, statistics and other research findings in real time. Launched in San Francisco in 2017, Forward now has six locations, including three in Los Angeles and two in New York.

These centers aim to do what many of us have been trying to achieve, often unsuccessfully, on our own: create a healthy, balanced lifestyle that addresses the mind and body. “Your MD might not believe in acupuncture, or your acupuncturist might not like what your MD is telling you, and that makes it really hard to integrate all of your wellness into one program on your own,” says Sarrah Hallock, cofounder of the Well. “We’re bringing the doctors and practitioners who are craving this kind of collaboration to one place.”

The Well’s reflexology and communal space.  Photo: Courtesy of the Well

Still, the new model isn’t a cure-all just yet: All memberships are out-of-pocket, and some specialized services and diagnostic tests must still be outsourced to traditional providers. At Parsley, Berzin is addressing this by following patient outcomes via biomarker tests and a proprietary tracker that measures progress related to everything from symptoms to prescriptions, in order to bring big insurance into the fold and eventually reach a broader socioeconomic base.

“We’re saving on average $5,000 per person by reversing sickness rather than simply treating it,” she says, pointing to improvement rates she’s seen for chronic conditions ranging from insomnia to infertility. And as part of the Well’s commitment to social impact, Hallock and her partners will ask their practitioners to volunteer in clinics and find ways to share knowledge with all communities.

The Well’s meditation room.  Photo: Courtesy of the Well

“This is just phase one,” says Hallock. “We will be seeing a lot more of this being offered on a mass level. In a few years, we’ll look back and ask, ‘Why didn’t this exist sooner?’ ”