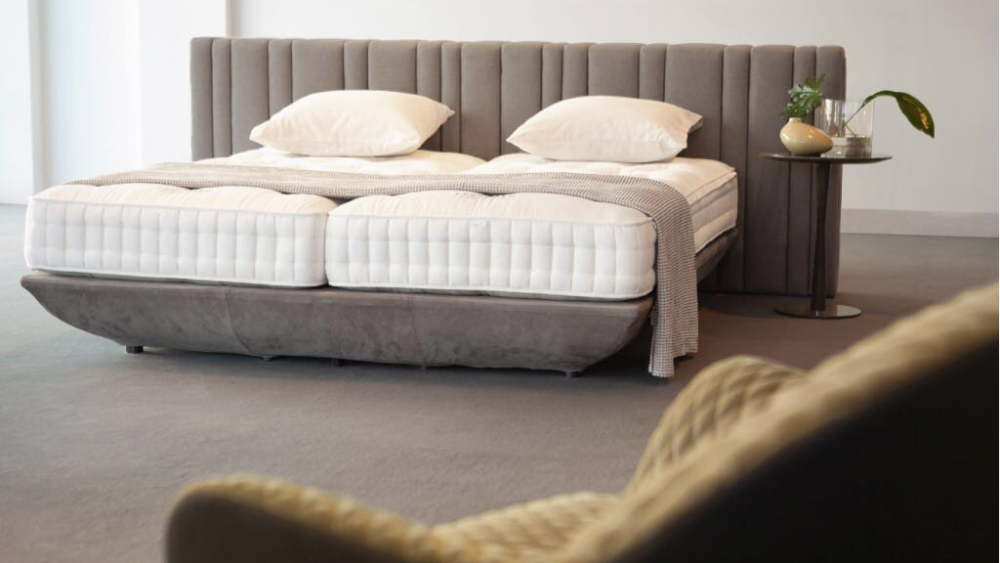 A fluffy escape courtesy of FreshBed.

When the thaw starts in Svalbard, Norway, and midsummer looms, the female eider ducks start shedding their down. The balls of fluff trap air, which makes eiderdown the perfect insulation for winters that plummet to a brisk four below zero—and the ideal material for what is the king of duvets. Norvegr, a family-run Norwegian company, will make just 100 eiderdown duvets in a good year, 50 if pickings are slim, with prices starting at $3,600 and soaring to $33,200 for the polar style, the brand’s plumpest option.

Oceans away in New York, the Netherlands-based company FreshBed delivers one of its $50,000 mattresses to a customer. The price includes an assessment by a sleep coach and a doctor, the latter of whom might, say, prescribe the popular sleep aid magnesium if a blood test finds a deficiency. FreshBed might also suggest structural changes to the bedroom, such as a new ventilation system to ensure that humidity from the bathroom doesn’t raise the temperature above the 64 degrees many doctors recommend for a good night’s rest.

Welcome to the world of super-high-end slumber, in which sleeping in is the new going out. Whereas a few decades ago it was a Wall Street badge of honor to survive on four hours’ shut-eye a night, today there is a new interest in self-care, wellness and mindfulness, not to mention a spate of news coverage on the potentially devastating impact that a lack of sleep wreaks on the heart, brain and longevity.

“The idea that sleep is passive time is not the case; it is vital for cognitive function in memory,” says Alanna Hare, consultant physician in respiratory and sleep medicine at Royal Brompton & Harefield Hospitals Specialist Care, whose London patients are mainly stressed-out executives. “The brain has a waste-disposal system that is 60 percent more effective at nighttime; it is where memories are laid down, it is the key for creativity—where solutions to complex problems are formed.”

Luxury companies have been quick to capitalize, developing a now burgeoning market of goods and services. Bleary-eyed adults seeking better slumber are turning to sleep consultants, who, like those for babies, claim to guide the way to a better night’s sleep, and booking scientific-sounding sleep retreats—think $4,000 for a week of polysomnography (measuring brainwaves, eye and body movements, breathing, oxygen levels and muscle tone), psychotherapy sessions and sashimi all in five-star surroundings.

Norwegian company Norvegr infuses its mattresses with duck down.  Illustration by Gel Jamlang

Take Canyon Ranch in Tucson, Ariz., where $2,949 buys you an overnight sleep study in an on-site lab to assess multiple awakenings, snoring, sleep apnea and unexplained daytime sleepiness, followed by a 50-minute consultation with a sleep specialist. That doctor then recommends a bespoke program ranging from bedtime rituals, such as drinking tea, reading or meditating, to the optimal nutrition and sleep environment.

“Sleep is misunderstood,” says Param Dedhia, MD, who oversees the Tucson property’s program. “It is not just when you creep into bed; it’s 24 hours.” For starters, Dedhia recommends eating fewer refined carbohydrates, doing 25 minutes of cardiovascular exercise a day, and turning down the thermostat. “We need to mimic nature: It gets dark and cool at night, so you need to create a cool, dark room. When you cool off, a reflex in the body releases chemicals for sleep.”

The Los Angeles–based psychologist Michael Breus, PhD, who oversees the sleep programs in Six Senses resorts, describes his typical private-practice patients as “type A, fatigued CEOs.” Breus not only analyzes DNA and blood samples for markers of sleep problems but also conducts house calls—in the flesh and, for his far-flung patients, via video—to consider such factors as the mattress, pillow and lighting and to instruct the sleep-deprived to track their slumber.

Sleep programs, like those found at the Six Senses, are becoming a popular luxury.  Illustration by Gel Jamlang

“Most clients I see are now realizing that sleep is the most critical aspect of their wellness and health,” says Breus. “The constant rate of stimulating sources really seems to get to most people. The increase in blue-light exposure [which overstimulates the brain], the ‘always on’ mentality, and people having access to their phones all the time have made sleep problems much worse.” For one recent patient, a 45-year-old executive, Breus’s recommendations included taking occasional naps when traveling, stretching and working out, and eating a snack before turning in to bed.

The perpetually tired have taken to forking over six figures for what they hope will be the magic bullet: the perfect mattress. The London-based company Savoir boasts such well-rested devotees as Oprah Winfrey, Madonna and Elton John. Each mattress is custom-made, with more support where the client’s body weight tends to settle and, for couples, bespoke sides. Similarly, for all those “one’s hot, one’s cold” pairs, Norvegr makes duvets with one side thicker than the other.

There is a particular penchant at the moment for circular, rotating beds, according to Savoir managing director Alistair Hughes. “A recent project was for a client who wanted to face the fire in their château in winter and rotate to view the avenue of lime trees in the summer,” says Hughes, who notes that Savoir caters to more than comfort-oriented needs: One customer required a secret jewelry compartment in the headboard; another, a drawer in the box-spring base to stash his golf equipment after practicing his putting in the bedroom.

Hästens incorporates horsehair into its mattresses to give the bed bounce.  Illustration by Gel Jamlang

Savoir has competition. To stuff its $189,000 bespoke mattresses, the Swedish company Hästens uses horsehair, which is credited with giving the bed bounce, channeling away moisture and letting in fresh air for a temperature-controlled night’s sleep. While the 167-year-old Hästens employs age-old craftsmanship, the Dutch company FreshBed takes a high-tech approach, implanting an air filter with a thermostat right inside the bed’s base to maintain a steady micro-climate with low humidity. (Unlike Dedhia, FreshBed asserts that people sleep better when a bit warmer.)

Small gadgets also abound. The Oura ring, worn on the finger, tracks body temperature and blood volume during sleep, while a host of apps use white noise to lull you to sleep, and wake-up lights such as the Lumie mimic the sunrise, brightening gradually over the last half hour of sleep. But many sleep experts aren’t buying it. “White noise can be helpful if you live in a noisy environment, but generally I try to avoid people getting attached to sleep props or aids, as this leads to the impression that they will not be able to sleep without them,” says Hare. “It is better to develop healthy sleep patterns to support natural sleep through one’s own intrinsic resources.”

Temperature control is essential to a good night’s sleep.  Illustration by Gel Jamlang

Then there’s the question of efficacy: Michael Grandner, PhD, director of the Sleep and Health Research Program at the University of Arizona College of Medicine in Tucson, says that many consumer products lack sufficient evidence that they actually work. He cautions that price is not necessarily the best determinant, even with mattresses. While the dirt cheap are probably not high quality, “just like how, after a certain point, more money does not equate to more happiness, many mattresses at the middle tier and above are likely to be comparable,” says Grandner. “When my patients ask me what quality to look for in a new mattress, usually my best advice is ‘a good return policy.’ ”

And what about those five-star sleep retreats? Hare says it’s always helpful to learn relaxation and mindfulness techniques, but the key is following through once you return home—“unless, of course,” she says, “you can move into the hotel permanently.”

Why the Two Biggest Deals at Sundance Made My Heart Sink