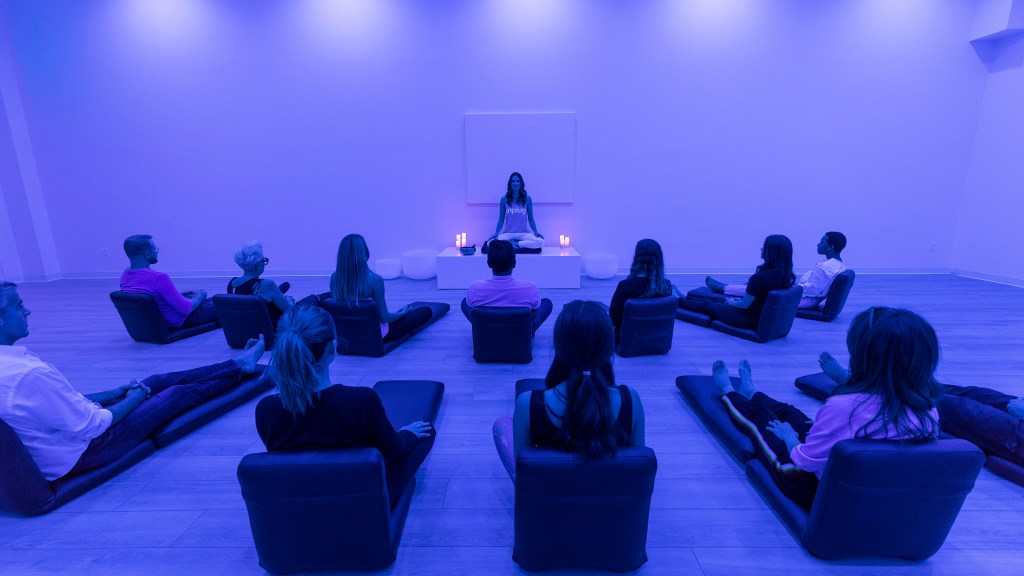 Suze Yalof Schwartz wants you to be quiet. And she means that in the nicest way.

“Any time we feel bored, we grab the phone or the clicker or the computer—we do something to get away from having to sit alone with ourselves,” she says. At Unplug Meditation—Schwartz’s drop-in mediation studio in Los Angeles—she teaches clients the seemingly simple art of meditation. “Sitting in silence and stillness is a challenge—we try to make it a lot less challenging by making it interesting, inspirational, simple, and accessible.”

Schwartz started meditating in 2013 after leaving her job as a fashion editor and relocating from New York to Los Angeles. While white-knuckling through a bicoastal (read: high-stress) lifestyle, Schwartz sought out meditation as a means to manage her anxiety. But when she searched for places where she could learn to improve her skills—ones that didn’t require a monthlong retreat or an intensive one-on-one session in someone’s private home—she came up empty. So, in 2014, Schwartz opened Unplug Meditation in West LA. There, teachers lead 30- to 45-minute classes in a dim, cushion-filled room with varying objectives—among them, intention-setting, guided visualizations, chakra-balancing, and stress relief.

Since the flagship’s debut, Schwartz has opened another outpost in West Hollywood and launched the Unplug Meditation smartphone app, which has users in more than three dozen countries and offers a range of guided meditations. The quickest, called “16 Seconds to Calm,” has been described as a kind of “meditation panic button.”

To be sure, we could all stand to hit that button more often. Two recent studies from Harvard Medical School concluded that meditating 28 minutes per day over the course of two months improves functionality in areas of the brain linked with cognitive and emotional processing. For her part, Schwartz is more realistic. “Look, I don’t believe that you need [to meditate] 28 minutes a day,” she says. “I think one meditation will change your day. I think more will change your life.”

Muse caught up with Schwartz to talk about those life-changing benefits, and how everybody—yes, everybody—can get them.

How has meditation helped you personally?

Now, whenever I feel stressed, I can pause, breathe, and get myself out of it. Whenever I’m around people that are difficult, I’m able to pause them, breathe, and figure out a way out of it. For me, I wish I had done this in my old career.

What kinds of issues do people come into your studio hoping to solve?

I think people come to our space or get the app because they want to reconnect to their lives. They’re getting some space away from their electronics, creating some space for creativity, clarity, and self-reflection. At Unplug, we’re literally using our space to just calm ourselves down and remember that we’re human.

And who’s coming into the studios?

We have a lot of doctors that come into our location. And a lot of lawyers—so many lawyers. In West Hollywood, we have actors, musicians, and people who are working in the digital world and want to unplug. We’ve got 22-year-old hipsters, 78-year-old women, 30-year-old guys in suits. No one looks like the person next to them, but they’re all sent to do the same thing: Get away from stress.

“I think one meditation will change your day.

I think more will change your life.”

No, there are no negative side effects and you can’t overdose on it. I always say, if meditation came in pill form, everybody would be taking it.

Why is it important to tap into our own energy?

Your moods have a rippling effect. If you’re stressed, your whole family is stressed. You need to own your ripple. I want to ripple out good energy, love, and positivity. I want people who are around me to feel good.

Do we need a mantra?

No, you don’t. I have my own Sanskrit mantra, which I never use. I prefer a mantra with the words “let go.” I breathe in “let,” then I exhale “go,” silently to myself. That’s a very easy mantra for me. Or, “I’m here.” Those are easy mantras, and they work for everyone.

What are some of the biggest misconceptions about meditation?

The first thing we hear is, “I can’t meditate because I think too much.” But thinking is part of the process. When you’re able to take thought, and redirect it to a single point of focus—I always call that a bicep curl for the brain.

The second thing that we hear [is]: “I have no time.” Look, if Oprah Winfrey has time to meditate, so do we.

How can people who feel really busy find the time to meditate?

Steal time by waking up 10 minutes earlier. Just steal it. I have three kids. Believe me when I say I get it. I also believe in the old adage that you’ve got to put the oxygen on yourself before you save everybody else.

Elizabeth Olsen on Working With the Rape Foundation and Stuart House