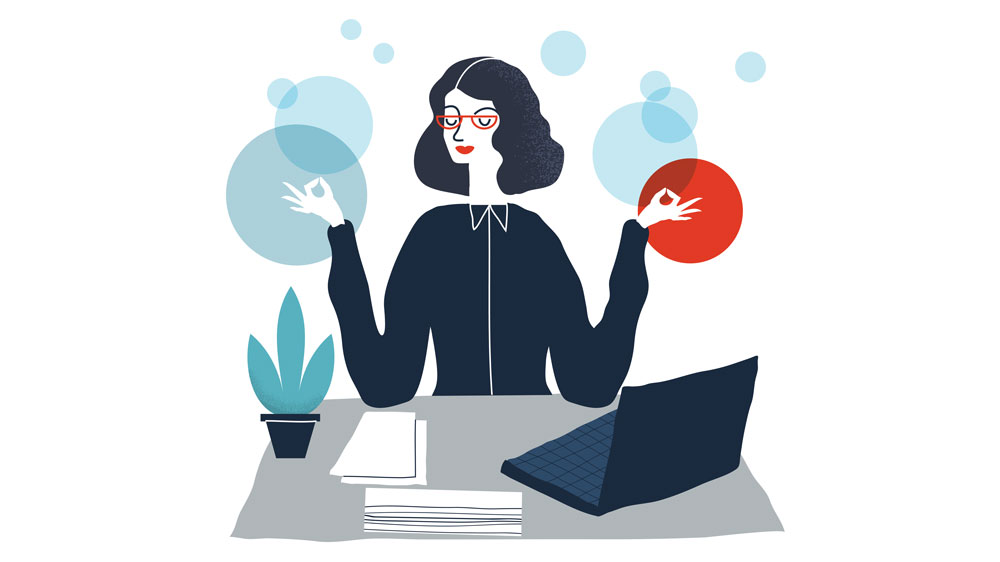 Everyone freaks out occasionally, and everyone has occasions when they freak out more than they normally would. Often, the anxiety springs from an outside event: an upcoming Ph.D. dissertation, scheduled surgery, the approach of the busy season at the office. Other bouts of anxiety stem from challenging situations that will end someday, but not soon: working for a tyrannical boss, for example, or facing a tragedy that upends a community.

Anxiety is a common sensation. Figures from the National Institute of Mental Health (NIMH) show that more than 19 percent of American adults—almost one in five—experience some form of anxiety disorder in a given year, and women are more likely to suffer than men, with about 23 percent of women afflicted compared to about 14 percent of men.

Managing anxiety without drugs is doable, and sufferers have many options when seeking help.

Distractions that smother anxious thoughts can work so long as the sufferer understands that they’re a temporary solution and uses them that way. It’s OK to spend the night before a colonoscopy watching movies or doing jigsaw puzzles. If the colonoscopy results reveal colon cancer, it’s unwise to rely on movies and puzzles alone as a coping technique during treatment. “The strategies you use in the short term don’t necessarily help in the long term,” says Dr. Martin Antony, professor of psychology at Ryerson University in Toronto and coauthor of The Anti-Anxiety Workbook: Proven Strategies to Overcome Worry, Phobias, Panic, and Obsessions. “Pushing thoughts away may help, but over the long term, it’s not terribly effective. It’s not helpful with anxiety that’s ongoing.”

Managing anxiety without drugs is doable,

and sufferers have many options when seeking help.

Physical exercise tops the list of long-term strategies for managing anxiety. “It’s one of these things that seems to help with everything, and anxiety is no exception,” Antony says. Also helpful are techniques and practices that fall under the heading of “mindfulness,” such as yoga and meditation. “They really do provide most people with a significant amount of relief,” says Harold Pass, Ph.D., associate professor of clinical psychiatry and director of psychology at Stony Brook University in Stony Brook, N.Y., who also keeps an independent practice. “Research shows that those techniques are effective if you practice them. People who complain that the techniques don’t work are often people who don’t practice them.”

Still, complaints about mindfulness techniques aren’t completely baseless. If anxiety is making your brain spin like a pinwheel, taking a yoga class or trying meditation could just give it a chance to spin harder and faster. Those who have trouble sitting still, or trouble getting their brains to sit still, can try diaphragmatic breathing. Also called deep breathing, it deliberately involves the diaphragm, a muscle located between the thoracic cavity, which contains the lungs, and the abdominal cavity. “Start doing it one to two minutes a day, and then every day add thirty seconds,” says Pass. “It may take a few weeks, but it builds on itself.”

Lauren Hoffman, Psy.D., a postdoctoral fellow at the Columbia University Clinic for Anxiety and Related Disorders (CUCARD) in New York City, suggests setting a daily breathing reminder on your smartphone. “We can all spare one minute. Being able to stop and take a break in the middle of the day is important. It doesn’t need to take longer than a minute,” she says.

Using anxiety as a tool can help, too. If your brain is spinning, you can try to spin it in your favor. “The way I think about it is it’s the difference between rumination and problem solving,” Hoffman says. “Rumination is worried thoughts. Problem-solving is making a plan.”

If your brain is thundering through increasingly ridiculous worst-case scenarios, stop and ask yourself: What would be the true worst-case scenario? How can I prepare for that? “We want people to question negative thoughts,” says Antony. “It’s really about flexible thinking. The more flexible they can be in their thinking, intense emotions such as anxiety, depression, and fear are less likely to be overwhelming.”

Pass also recommends cutting down on caffeine, which is a stimulating, addictive drug. “The first thing we tell people is to decrease anything that has caffeine—coffee, Coke,” he says. “Decreasing caffeine is going to help.” Limiting exposure to social media, technological intrusions, and the news helps ease anxiety as well. Hoffman explains, “Another thing people struggle with in the professional world is technology. On one hand, it frees us from the office, and on the other hand, it makes it hard to set a boundary on work. I recommend setting specific times to check email, especially if you’re away for the weekend. Sometimes knowing there will be a time to check can be helpful.”

For some, these techniques and suggestions for fighting anxiety won’t be enough, and they might need to add therapy or prescription drugs or both to their regimen. Hoffman offers a way to spot if you’re one of them: “If the anxiety lasts beyond a specific trigger and happens more pervasively. Instead of one stressor every few months, it’s weekly, and it’s smaller and smaller things.” If that sounds like what’s happening to you, don’t be afraid to ask for professional help.