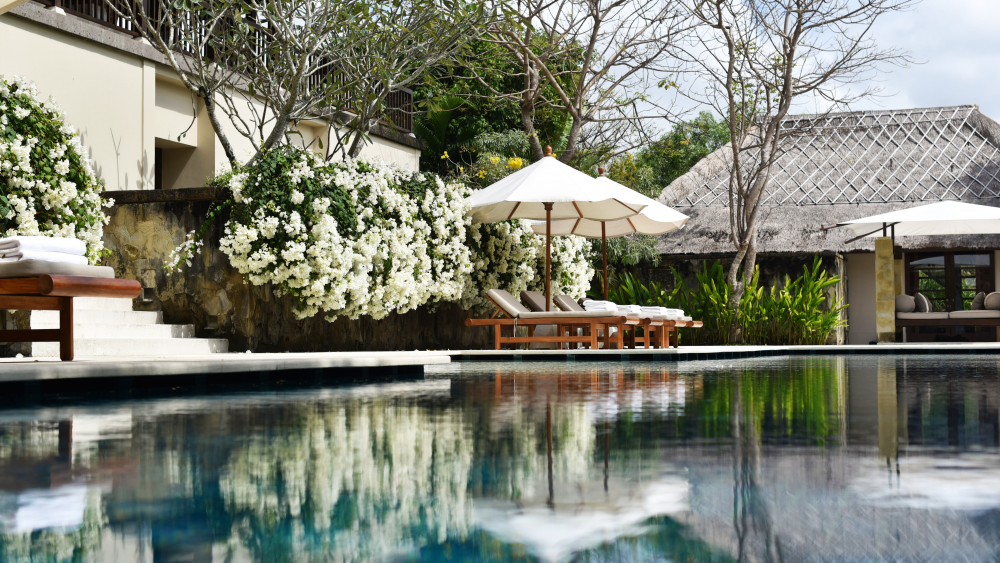 Three years ago, Laurie Mias walked into the office of entrepreneur Gordon Oldham with a plan. It was all about juice. “I had a juice shop in Hong Kong and I was looking for investors, and he was the owner of this big luxury resort brand,” she says. “I thought he might be interested.”

Turns out Oldham, a lawyer and cofounder and CEO of Pavilions Hotels & Resorts, wasn’t interested—he passed on Mias’s pitch. But instead of showing her to the door, he asked her what she knew about building a spa. The answer, Mias says, was “not much,” but the then 32-year-old was a yoga teacher and she knew the Southeast Asian market well, as both a business owner and a wellness consumer. That was enough for Oldham: He sent Mias to Bali, where he’d just purchased a resort—the former Amanusa on the island’s southern end—that he wanted to turn into a spa hotel. She was tasked with figuring out how to make it happen.

But when Mias arrived she discovered a problem. Though the resort was beautiful, Oldham’s plan was an obvious mistake. “This was an area that had spa hotels everywhere; the competition was amazing,” Mias recalls. “If this property was going to succeed, it needed to be something more.” So she went back to Hong Kong and told Oldham to scrap his idea—she had a better one—and for the next year, she built the business model for a new retreat where the programming would be more holistic than that of the typical yoga resort or spa. “I wanted to provide an experience where guests would really achieve something lasting,” she says. “And if you really want to create change, it has to happen through transformation of the mind and the way we think.”

A yoga instructor herself, Mias incorporated the art into Revīvō’s offerings.  Photo: Courtesy of Revīvō Resorts

Thus, Revīvō was born. It’s a new type of wellness retreat in which mindfulness leads the way, whether you want to lose weight, sleep better, get healthier or de-stress. From the time you wake up until you go to bed, every experience comes with mindfulness training that, Mias says, “reminds us to be 100 percent present in our lives.” Turns out, thinking only about the present—not our worries for the future or our anxieties about the past—takes a lot of practice: Before a spa treatment, guests may mix their own botanicals, pondering the smell and texture as they do it; before meals, they may meditate on the value of the food they’re about to eat; and before bed, a “brain-drain” notebook helps guests clear their minds of distractions. The repetition connects the process of each ritual to its positive effects and, Mias hopes, creates habits that guests take back to their everyday lives for long-standing change.

Before spa treatments, guests can mix their own botanicals.  Photo: Courtesy of Revīvō Resorts

Mias’s lack of experience in the spa world is perhaps the reason Revīvō Wellness Resort Bali is so singular in its approach. The property’s retreats—which range from Emotional Balance and Mind Training to Anti-Aging and Longevity—abandon the classic tropes and trends of wellness spas; there are no gimmicky facials or new-age therapies, no stringent rules or dietary restrictions. “If you want to lose five kilograms in a week, we’re going to tell you we don’t do that,” says Mias. “We’re asking people to commit to change that is sustainable—that’s what we mean by mindfulness.”

Next year, Mias will open two more Revīvō properties—one in a historic château in the South of France, the other in a 19th-century estate near Barcelona—as well as a pair of clubs inside two new Pavilions resorts in Rome and Niseko, Japan. But all the properties will be different, with unique styles and programming, down to the ingredients used in the spas and kitchens. “Each new property is like building an entirely new product,” says Mias, pointing out the botanical apothecary that will be the centerpiece at her French château. “It takes longer, working with all new specialists and building an entirely new program, but by now Mr. Oldham knows I’m not willing to compromise my vision.”

A selection of body scrubs.  Photo: Courtesy of Revīvō

Neither is Oldham. His rapidly expanding hotel group is built on his passion for adventure, nature and conservation, and as a competitive endurance runner, he understood Mias’s mission with Revīvō almost immediately. “It’s always been my philosophy to invest in things that I actually enjoy,” he says. “Laurie is such a well-informed, enthusiastic woman that I knew it was going to be fun working with her whatever we did.”

And as for that juice shop that brought Mias and Oldham together in the first place? “Well, it didn’t work out,” she says, laughing. “But what I did instead, I did with all my heart. It’s about simplicity, self-awareness, self-reliance and gratitude—for my guests and for myself.”