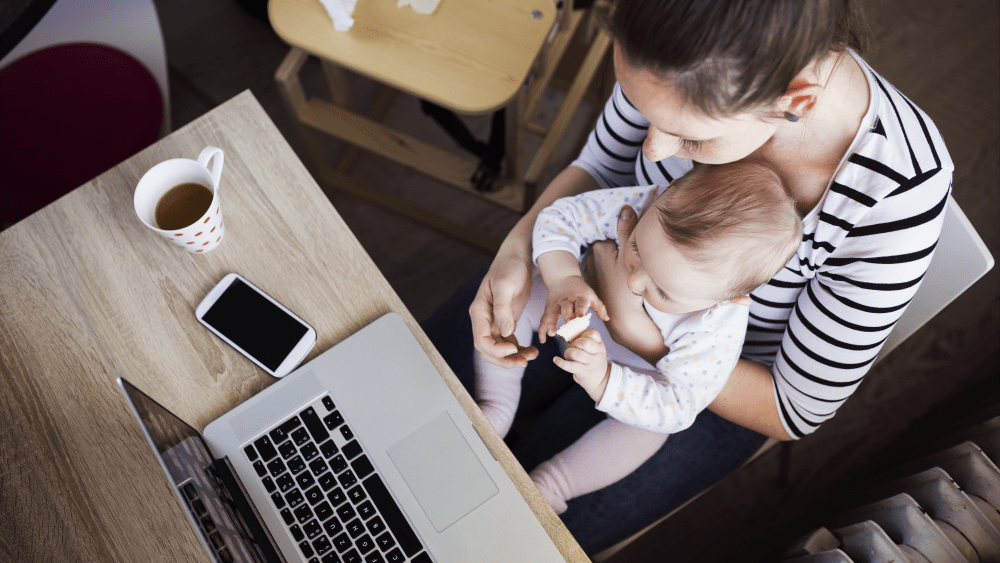 It’s one of parenthood’s oldest clichés: Dad stoops over the bassinet, desperate to hear if baby’s breathing. There’s also the one about the sleepless mom resorting to extremes (like running the blowdryer for an hour or bouncing with her infant on a yoga ball until her legs burn) to get baby to sleep. Or the tale of the bleary-eyed parents showing up to the pediatrician convinced their little one has contracted a rare disease. The neuroses of new parents are predictable, pervasive and consistent over generations—a combination that, in 2019-speak, screams “disruption.”

If your mental image of new parenthood is some sepia-toned hearkening to ye olde maternal intuition, heads up: Tech is attempting to tackle all of the new parent’s anxieties. The $300 Owlet Smart Sock monitors baby’s heart rate and oxygen levels and sends parents a phone alert if those measures fall outside predetermined parameters.

The $40 Kinsa Smart Ear thermometer and its app tell a parent not just whether baby has a temperature but also—via big-data synchronization—which viruses are going around the neighborhood. The $1,295 Snoo Smart Sleeper, a bassinet with a swaddle insert, rocking motion and white noise that are meant to mimic the womb, rocks your kid to sleep. If she wakes, built-in microphones detect her whimpers and amp up the bed’s swaying by as many as four levels—meaning that if the Snoo can’t settle baby, she probably needs to be fed, burped or changed.

But wait, there’s more: Bulky breast pumps are no match for the nearly unnoticeable $499 Willow wearable breast pump, whose quiet wireless bra inserts theoretically allow Mom to pump breast milk while eating dinner with friends or running a meeting. The Nanit enables parents to livestream baby in high definition, monitor the nursery’s temperature and humidity and analyze real-time stats on the infant’s sleep efficiency—all in the name of eight (or more) hours a night.

And the $130 Hatch Baby Grow changing pad and smart scale tracks the tot’s weight gain and makes a record of each diaper change, so mom can see if he’s on track to be a star offensive lineman (and whether his, er, outgoings are above or below average).

Today’s baby tech is enough to make grandparents sigh with envy—or is that agita? For as much as each of these items individually can seem life-changing or even miraculous, together they can be overwhelming. Is it even possible for a mother to monitor a baby’s heart rate, breathing, sleep, nursery climate and poops—and her own breast milk production—without becoming at least slightly unhinged? If it is possible, could baby end up, well, over-optimized?

“I’m stuck between being fascinated, laughing, and becoming anxious,” says Catherine Birndorf, MD, founding director of the Payne Whitney Women’s Program at the New York–Presbyterian Hospital Weill Cornell Medical Center, where she serves as an associate professor of psychiatry and obstetrics and gynecology.

“It’s neurotic-making when moms are already insecure and new at this job, and data is very seductive. Lots of information is compelling because somehow you think it can make you a better mom, but I don’t think that’s actually the case,” she says.

“Multitasking is hard,” she adds, referring to concealed, wearable breast pumps like the Willow. “Could I be in a meeting paying attention while a pump is going on in my bra? Probably not.” Still, she says, every individual’s experience of motherhood—and the post-partum period—is different. “If it’s helping you— alleviating fears or allowing you to sleep—then go for it. But be careful that doesn’t change.”

A closer look at the Willow wearable breast pump. ($499)

Almost every new parent knows of Harvey Karp, MD, the best-selling pediatrician author of The Happiest Baby on the Block who virtually singlehandedly brought swaddling back into vogue. In 2016, his company, Happiest Baby, introduced the Snoo bassinet as what he calls a “helper, another member of the family” that lets parents shower or make dinner—or sleep.

“Sleep is a very important trigger of some serious issues,” he claims. “Two of the biggest triggers for postpartum depression, which affects 500,000 to one million women [in the U.S.] every year, are exhaustion and a crying baby. Obesity, child abuse and lots of other problems are triggered by crying and exhaustion. We want to make an impact, reduce the incidence of postpartum depression, help babies withdrawing from drugs, prevent infant sleep death.”

To wit, Karp is conducting hospital trials—such as seeing if the Snoo helps babies in opioid withdrawal in neonatal intensive care units—with the hope that the Snoo could one day be subsidized by insurance and therefore more accessible (he’s also just launched a Snoo rental program for about $150 a month).

The Owlet oxygen-monitoring sock also aims to help parents sleep soundly—though a 2018 study in the Journal of the American Medical Association cautioned against its use and found a competitor monitor (now off the market) dangerously inaccurate. Christopher P. Bonafide, MD, who ran the study at the Children’s Hospital of Philadelphia, told People in 2018 that he wouldn’t recommend baby oxygen monitors to friends and family because of inconsistencies.

“For parents who do choose to use them, [they and their doctor would] hopefully collaborate on a plan together for how the parents are going to respond when the alarms do go off in the middle of the night,” he said. (Owlet contested the study’s methodology and accuracy.)

The Snoo is also imperfect, as Lauren Berg Donovan, owner and president of Minneapolis-based public relations firm Style Architects, can attest. Before getting a Snoo, Donovan recalls, she endured two months of near-constant night-time wake-ups with her second daughter, Maisie.

“There were so many nights when I was like, ‘I can’t keep sleeping 30 minutes at a time and continue to function,’ ” she says. “I’d end up reading Snoo reviews online at 2 a.m. and waking up my husband to try to get him to agree we should buy it.”

When her mom miraculously secured her a loaner Snoo, it wasn’t the cure-all she expected, partly because Maisie was subsequently diagnosed with acid reflux, and partly because the bassinet takes some getting used to. “It did help, but it took over a month to see the results, and by that point we were nearly ready to move her out of it,” says Donovan. (A rocky adjustment period for “older” babies is normal, per Happiest Baby’s customer service team.) Birndorf, who has a Snoo in the Motherhood Center, says she thinks it’s a great idea that “works for many,” but “it’s not going to solve all your problems.”

A closer look at the Owlet Smart Sock.  Photo: Courtesy of Owlet

Babies outgrow the Snoo by six months, and some parents fear that their children won’t adjust well to sleeping without the bassinet’s white noise and motion. Karp advises using its “wean” function for a few weeks (which reduces the rocking) and then maintaining the “sleep cue” of white noise with a sound machine or app once the baby is sleeping in a crib.

“Babies are born dependent on motion and loud sound and holding, because that’s what they have in the womb 24-7,” he says. “If you take away everything they used to have, they don’t do well. If you do it gradually and let them learn what’s expected, they have the chance to mature and develop.”

He posits that the Snoo teaches babies they can settle down without their moms and dads. (In the interest of full disclosure, I have a Snoo that I believe molded my son into the good sleeper he has been for nearly all of his year-long life.) Other parents fret that the strapped-in swaddle will keep baby from learning to roll over, but Karp dismisses this worry outright: “Your baby will spend 12 hours a day not swaddled, so there are plenty of opportunities to learn to roll over.”

There’s an analytics-driven app associated with almost every piece of baby tech, helping parents track and trend every bodily function and neighborhood illness. This development, says Birndorf, has the potential to be counterproductive.

“The question is just like it is with [genetic] testing while pregnant: ‘What will you do with this information?’ If you can answer that question, it’s worth a try. If not, it’s just getting you in a deeper, darker hole. The potential is that all your worst nightmares [turn into] data that somehow make them more real.”

Though the Snoo app offers a data-filled “log” of baby’s sleep, close monitoring of analytics is “a misdirection of parents’ attention,” says Karp. “I’m not against metrics, I think they’re cool, but we’re all tempted to be on our phones too much. The goal is to understand what your baby is telling you.”

It’s recently, scandalously and rather unsurprisingly emerged that many of the tech titans responsible for our phone addictions are raising their kids tech-free. A 2017 survey of 907 Silicon Valley parents conducted by the Silicon Valley Community Foundation found that despite high confidence in technology’s benefits, many parents have serious concerns about tech’s impact on kids’ psychological and social development.

The Snoo in action.  Photo: Courtesy of Happiest Baby

But when it comes to babies’ development, the industry seems to be pretty pro-tech: Companies including Activision, Hulu, Qualcomm and Snap even offer the Snoo as a benefit to new parents. “It’s an efficiency situation,” says Karp of the Snoo’s prevalence in the Valley. “It’s tech to get more sleep and be a better parent and spend more time with your kid.”

For parents who are on board, there’s a ton coming their way through the pipeline. The finalists for the 2019 Consumer Electronics Show’s Baby Tech category included a sensor that makes any bottle a “smart bottle” to track how much, and how quickly, a baby eats at each feeding; a Bluetooth-enabled kit for examining a baby’s heart, lungs, skin, throat, ears and temperature at home and sending results to a cloud-based analytics repository (and presumably a doctor); and the world’s smallest location-tracking sensor. These innovations suggest that tech isn’t exiting the mothersphere anytime soon.

“‘I don’t want a robot raising my baby’ is feedback I sometimes get,” says Karp, who counters, “You’re not a better mother because you sweep instead of using a vacuum cleaner.”