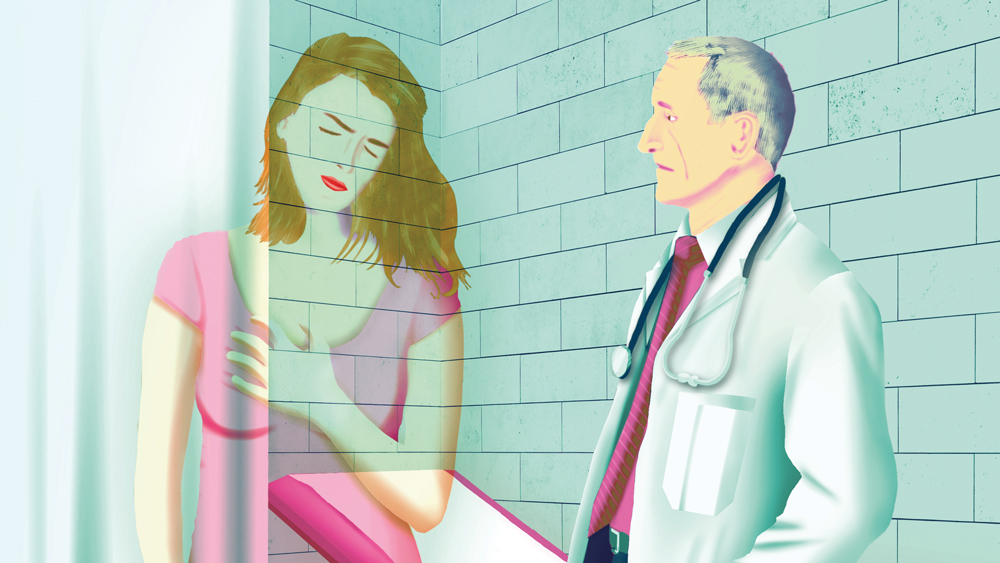 The first time Barbara Fleeman, a retired marketing executive, fell victim to the health-care gender gap was in 2002, when she was in her late 40s. Fleeman woke up one morning with sharp chest pains, and checked herself into the emergency room of a Los Angeles hospital, where she was given an X-ray and an echocardiogram.

“All your tests are normal,” the attending physician told her. “Your heart looks great. You must be having indigestion.”

“No,” Fleeman said. “I know what indigestion feels like. This is in my heart.”

Unconvinced, he gave her a small cup of pink bismuth that contained an anesthetic, and said that if she drank it and felt better, his diagnosis was correct.

Fleeman swallowed the chalky liquid, and her throat and esophagus immediately went numb. Her pain, however, remained.

“This isn’t helping,” she said.

“Well then it must be anxiety,” the doctor responded tersely. He scribbled her a prescription and walked out.

“I felt totally ignored,” Fleeman recalls. “He didn’t get it. Something was very wrong with me, and I knew it was in my heart—not my head.”

The next morning, she saw her internist, and with more tests discovered that she had a potentially fatal condition called pericarditis, an inflammation of the lining surrounding the heart. Antibiotics cured Fleeman, but her encounter with the dismissive ER physician left a scar. She vowed to aggressively advocate for herself in her own medical care from that day forward—an approach that would save her life again a decade later.

“If I knew then what I know now, I would not have left the hospital,” Fleeman says. “I would have demanded to see another doctor above him.”

What Fleeman knows now, at 62, is that her experience was hardly unique. Many studies have shown that women are particularly vulnerable to receiving suboptimal treatment by their health-care providers simply because of their gender. Yet women often admit to not advocating for themselves for fear of being perceived as chronic complainers, worriers, or hypochondriacs.

These fears seem misplaced when you learn that as a woman you are less likely than a man to be given pain medication, you will wait longer to receive it, and you are more likely to receive a psychological diagnosis for your physical pain. If you are a critically ill woman over 50, you are less likely than a critically ill man of the same age to be admitted to an intensive care unit or receive life- saving interventions. If you are a woman under 55 experiencing a heart attack, you are more prone to delayed care, mistaken diagnoses, and even dying in the hospital. This is just the tip of the iceberg.

“I call it the trust gap—the tendency of health- care providers to not believe women’s reporting of their own symptoms,” says Maya Dusenbery, author of Doing Harm: The Truth About How Bad Medicine and Lazy Science Leave Women Dismissed, Misdiagnosed, and Sick. As part of her research on the gender-gap crisis, Dusenbery gathered medical stories from more than 200 women.

“Most of them felt like their experience must be bad luck—they just happened to get a bad doctor,” she says. “Even really well-educated women who have a lot of authority in other respects in their lives tend to internalize the problem. . . . It becomes so difficult to trust yourself when an expert is telling you that nothing’s wrong.”

But trust is only half the battle. Women also face what Dusenbery calls a “knowledge gap”— that is, a lack of reliable research specific to the female body, due in large part to the medical industry’s over-reliance on male study subjects.

“Historically, women were often excluded from clinical research,” confirms Dr. Janine Austin Clayton, director of the Office of Research on Women’s Health at the National Institutes of Health. “Many scientists assumed that the differences between men and women were irrelevant.”

It wasn’t until Congress passed the NIH Revitalization Act of 1993 that women and minorities were required to be included in NIH-funded clinical trials. Dr. Clayton points out that women now comprise between 57 and 60 percent of all NIH-supported studies. Still, 25 years later, the majority of clinical research remains largely focused on the male experience, resulting in findings that are often irrelevant—and even harmful— to female bodies.

For instance, women are 50 to 75 percent more likely than men to experience an adverse drug reaction. Sex differences like body weight, liver metabolism, kidney function, and hormonal fluctuations have been found to affect our reactions to painkillers, antidepressants, anesthesia, and antihistamines, to name a few. One of the most publicized examples of this was in 2013, when the FDA discovered that female bodies metabolize zolpidem tartrate—the active ingredient in Ambien—slower than their male counterparts, causing an alarming number of cases of impaired driving the next morning.

But some research gaps are so gaping, women risk life and limb trying to cross them. Heart disease, for instance, is the number one killer of women, and more deadly than all forms of cancer combined, yet two-thirds of women experiencing a heart attack don’t have the classic, male-pattern chest pain. Instead they report feelings of nausea, pressure, pain, sweatiness, shortness of breath, and overwhelming fatigue—and are often sent home with antianxiety pills. Even worse, women are five times more likely than men to have non- obstructive coronary artery disease, a condition that isn’t detected by the conventional diagnostic tools used to test for male-pattern heart disease.

Women face a “knowledge gap”—that is, a lack of reliable research specific to the female body, due in large part to the medical industry’s over-reliance on male study subjects.

Eleven years after her misdiagnosis in the ER, Barbara Fleeman felt the consequences of this symptom disparity again when, in 2013, she experienced chest pains and shortness of breath, in addition to a bad cough. She saw an internist, an ENT, a gastroenterologist, and a cardiologist; she underwent blood tests, stress tests, X-rays, and an EKG. All of her results came back normal. Her lowest point came when her cardiologist told her, “Congratulations, you have one of the healthiest hearts of all my patients,” and gushed about her low cholesterol numbers and clear arteries.

“I didn’t even care anymore what was wrong with me,” she recalls. “I just needed someone to tell me why I was so sick. And to fix it.”

Fleeman was in the throes of “the specialist shuffle,” a phrase coined by Leslie Michelson, founder of Private Health Management (private health.com), a Los Angeles–based practice that specializes in out-of-the-box thinking for complex and mysterious medical problems.

“Women are disproportionately subject to the specialist shuffle,” he says, pointing to a recent case of a retired professional in her mid-50s who had inexplicable fatigue. “She and her husband were very active, hiking and biking around the world. But over a five-year period, she slowly lost the ability to function. She could walk the dog to the end of the driveway to get the mail, but then it was back to bed.”

As this woman visited specialist after specialist, she was told again and again: It’s depression; it’s chronic fatigue; it’s stress. She’d almost given up by the time she reached out to Michelson’s team. After taking her full history and studying her medical records, they spotted slight abnormalities in her blood work that led to the true culprit: primary hyperparathyroidism, an endocrine disorder that occurs when there’s a malfunction in one of the four glands in the body that regulate calcium. A specialist confirmed their hunch, and she was cured with a two-hour surgery to remove the deficient gland. She felt better immediately. A month later, she was traveling the world again.

“Unfortunately, a lot of the conditions that burden women’s lives are inherently tricky to diagnose, in part because women’s bodies are more complex than men’s bodies, and these dis- eases manifest slowly and in different ways over time,” says Michelson. “So it requires a higher level of expertise to get it right, which places a greater burden and obligation on women to become more aggressive, assertive health-care consumers.”

Which is exactly what Fleeman resolved to do. After an internet search, she called Dr. C. Noel Bairey Merz, director of the Barbra Streisand Women’s Heart Center at Cedars-Sinai, and the principal investigator of the Women’s Ischemia Syndrome Evaluation study, a landmark report that changed the way doctors approach female heart disease.

Dr. Bairey Merz ordered a high-resolution cardiac MRI with nuclear stress for Fleeman, which provided a deeper look into her heart. Sure enough: Fleeman had coronary microvascular dis- ease, a type of heart condition in which the tiniest arteries in the body are damaged. As many as three million American women have coronary MVD, and many of them will never know it.

If you are a woman under 55 experiencing a heart attack, you are more prone to delayed care, mistaken diagnoses, and even dying in the hospital.

Because Fleeman lives in a major metropolis, she was able to secure an accomplished female cardiologist. Not everyone is so lucky. We can cheer the fact that in 2017, for the first time, more than half of all medical-school entrants were women. But men still dominate the specializations of cardiology, oncology, and general surgery. (Even when those 19.2 percent of female surgeons finally make it to the operating room, they report high levels of ergonomic discomfort because OR instruments and theaters are designed for men’s larger hands and bodies.) And, of course, female doctors aren’t guaranteed to be impervious to the long-standing biases of their industry, either. All of which com- pounds the systemic challenges women face when seeking care for our most prevalent medical issues.

“What’s striking to me is that so few problems have become so mutually reinforcing,” says Dusenbery. “The more women go to doctors and complain of these symptoms, the more we hear the assumption, ‘It’s all in your head.’ Women’s voices are not being treated with the same authority as men’s in a whole range of realms, but in medicine, that type of stereotyping is deeply entrenched. It’s self-perpetuating.”

The good news, according to Dr. Bairey Merz, is that she and her colleagues are seeing an increased interest and awareness among the next generation. “The physicians in training now tell us that they want more education about sex and gender differences,” she says. “I do think that the younger ones will lead the change. But how quickly? I don’t know. Fifteen years ago, when we’d present our findings at the annual American Heart Association meeting, there would be 30 people in the audience for our session. Now it’s 500. In the big picture, 500 out of 30,000 attendees is still a minority. But it’s a start.”

With a New Constitution, an Old Question: What Next for the NCAA?