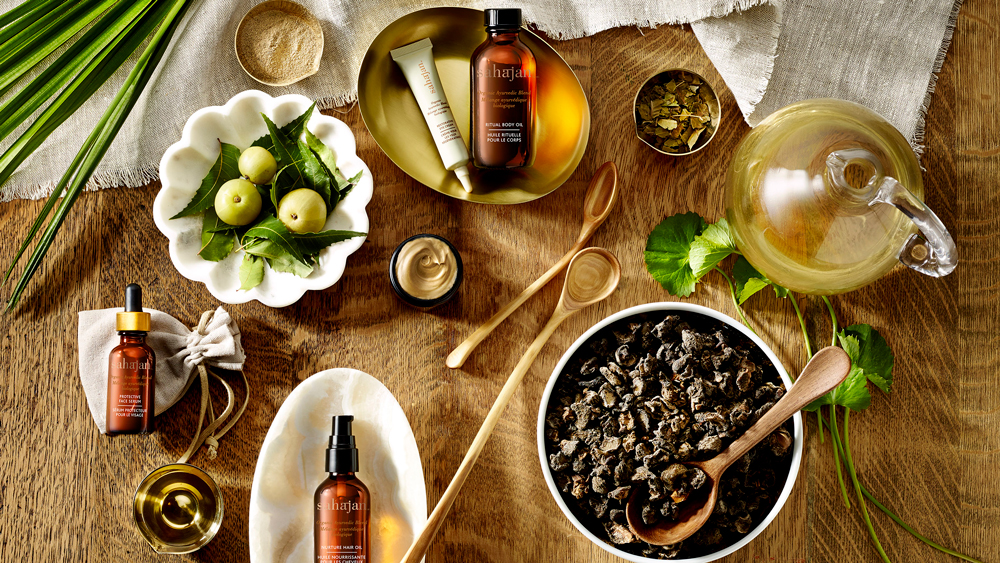 As the proliferation of ancient holistic science Ayurveda continues stateside—think: pure copper tongue scrapers found on Amazon or turmeric-laced golden milks at wellness cafés—select evangelists of the Indian tradition are leaning into luxury to make their case.

Take pharmaceutical-executive-turned-beauty entrepreneur Lisa Mattam, who debuted her Ayurvedic skin- and hair-care line, Sahajan, three years ago at the Toronto Film Festival. “When I first introduced the brand, it was largely with celebrities, a specific set of people, yes, but they seemed to really understand how Ayurveda could fit into wellness and their lifestyles,” she says.

Of course, the practice of Ayurveda, translated from Sanskrit as “the science of life,” is more than 5,000 years old. Still, it has somewhat of an inherent esoteric nature.

Ayurveda is based on five fundamental elements: space, air, fire, water, and earth, and subsequently classifies each person based on their dosha, or energy—vata, pitta, or kapha—which determines everything from digestive problems to skin issues and sleep patterns.

“The woman who wants great skincare, who is mindful about wellness, she is one in the same with the woman who is interested in Ayurveda.”

Fast forward to now and Mattam explains that Ayurveda has gone “mainstream.” Proof of that? Next spring, Sahajan will go after a more affluent customer, thanks to a new retail partnership with Neiman Marcus via its 22 Trending Beauty locations and at NeimanMarcus.com. (Prior to this, Sahajan, which participated in Sephora’s founding Accelerate incubator in 2016, had remained largely a Canada-based company with select distribution in the U.S. through Credo Beauty.) Sahajan will also expand from face and body oils and serums into cosmetics with lip offerings in 2019.

“The woman who wants great skincare, who is mindful about wellness, she is one in the same with the woman who is interested in Ayurveda,” says Mattam.

Shrankhla Holecek, founder of Uma Oils, a luxury wellness line that retails for up to $285, agrees. “It has come into the public consciousness in a way because of the rise in health and wellness,” she says. “People want to take better care of themselves in all manners. They want something that is efficacious and good for them. That is why they are going back to something that is rooted in tradition.” And Holecek should know. Her family served as Ayurvedic physicians for Indian royalty for 800 years, who then transitioned to be farmers of organic botanical oils for the perfume industry when the monarchy fell apart. Now, her two-year-old line can be found through partnerships with Equinox and Goop.

However, Holecek’s most interesting proposition as of late has been her collaborations with five-star hotels and spas across the country, like the Belmond Hotel and Nobu Ryokan—the latter doesn’t even detail its spa services, but nightly hotel rates start at $2,000. By not only selling her high-end products at the locations, but also integrating them into Ayurvedic facials and massages, Holecek is educating a whole new class of clientele—by the end of next year, Uma Oils is upping its hotel-meets-spa offerings from 25 locations to 55.

Luxury jet-setters are also who Ayurvedic expert Martha Soffer has her eye on. Known for cleansing Gwyneth Paltrow, Julia Roberts, Shiva Rose, and Kourtney Kardashian with her transformative seven-day panchakarma treatments (purifying rituals) at her Pacific Palisades enclave called Surya Spa, Soffer will be moving her practice into the new Santa Monica Proper Hotel, which opens in May 2019.

The location will facilitate up to 24 guests a day, thanks to two additional treatment rooms (Soffer typically sees seven clients every 24 hours), and will be decked out with design inspiration from Kelly Wearstler. “Everything we are doing from a design point of view, from the crystals to the wood, is all natural and meant to better the Ayurvedic experience,” she says. “It’s Indian-inspired, but for the modern traveler.”

But most importantly, Soffer will be debuting more involved services and products, from an Ayurvedic circulatory massage with two masseuses at the same time, to even Vishesh-like (deep tissue) massages for those looking for an introduction to the Indian ritual. Furthermore, Soffer will be expanding her limited (and often sold out) product assortment of body salts to collagen creams, facial oil creams, and spot oils at the locale.

“I’ve been waiting for this moment for 30 years, for people to say, ‘Ah, Ayurveda. I know what that is,’” says Soffer. “It is finally here.”

Kohl’s Doubles Down on Store Experience