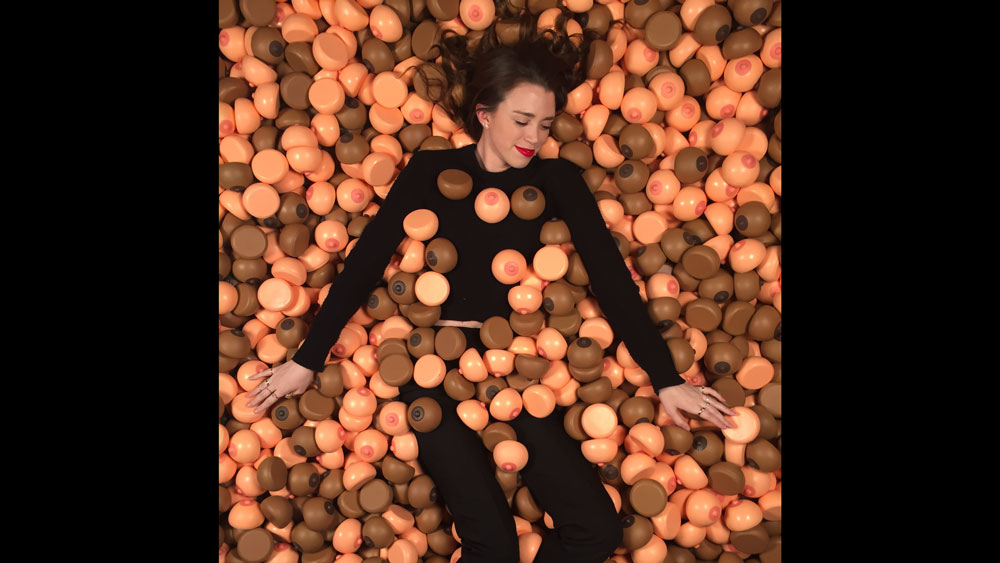 This month, worlds will collide. In San Francisco, the latest pop-up museum—one of those viral and altogether un-museum-like outposts that exists solely to be Instagrammed—will be devoted not to ice cream or pizza or rosé. Instead, That Lady Thing will attempt to shine a spotlight on such serious women’s issues as sexual harassment, gender inequality, and the pay gap.

Was it inevitable that the #MeToo movement would eventually go full-selfie? TLT founder Jamie Shaw thinks so. The creative director of San Francisco’s Eleven ad agency—who was also the mastermind of another women’s issues–focused pop-up, the Lady Factory, earlier this year—says her museum (and speakeasy!) shouldn’t be dismissed as a flip approach to a critical issue.

“The idea that serious content shouldn’t penetrate a space like Instagram means that activism only belongs in typical protests,” says Shaw. “[That Lady Thing] is another form of protest, just one using the visual language that will get it in front of more eyeballs.”

We caught up with Shaw to talk more about That Lady Thing, which will open its doors for five days in San Francisco’s Design District on August 5 with the regular funhouse roster of ball pits, themed cocktails, and colorful selfie setups—but with an unmistakably feminist twist.

How did the idea for That Lady Thing came about?

In many ways, it follows on the Lady Factory, one-night-only activation that our team developed this past March. During our brainstorming sessions in the lead-up to the event, we had all sorts of ideas ranging from launching apps and commissioning public art installations to sponsoring crazy stunts like having women climbers scale several buildings downtown.

It was during one of those meetings that someone made an offhand comment about how hard it was to get people to look away from Instagram. We instantly realized that what we needed to do was to actually take our message into that arena by launching an Instagram-friendly activation, cheekily referencing the trend in pop-up “museums,” which exist primarily for the purpose of taking selfies. As we like to say, “Our selfies come with a side of self-respect.” After such an amazing response to our March activation, I lobbied my partners to help me make it real by taking it public. They agreed to support the project, so here we are!

So, what is That Lady Thing going to be like?

Our tagline for the event is “Part Speakeasy. Part Speak Out.” We’re taking over a speakeasy-like destination in San Francisco where we will be offering cocktail favorites such as Consensual Sex on the Beach and French 75 Cents on the Dollar.

Within the space, there are three experiences: the Corporate Climb rock wall; the Money Maker, in which women can rake in the fake cash to highlight the pay gap; and the Sea of Objectification, a ball pit filled with boob-shaped balls. We will also have the Wallflowers, eight amusing feminist-themed wallpaper backdrops.

The Sea of Objectification (left) and Corporate Climb rock wall.

Are you at all concerned that some people might find this casual attitude to a serious issue offensive?

I understand why people might react that way. We think we’re doing something powerful by inserting serious issues into a typically vapid space. You’re scrolling through your feed, looking at lifestyle moments, and then—bam!—one of our exhibits, with a post about gender bias. It makes you stop. It makes you notice. It stands out because activism doesn’t usually present in this way. There’s tension in that juxtaposition.

So, while many of us address these issues at moments like the Women’s March, we believe that we can speak out and share them in everyday life, too, even at a pop-up, Instagrammable museum—perhaps the least likely place to find activism. Also, there’s nothing flip about raising money for organizations like the National Women’s Law Center, which is the beneficiary of the event’s proceeds.

Who are you targeting with TLT?

Our target audience is all women, and all those who support them. We are currently a 21-and-up experience, but we are already planning a teen version without cocktails and some teen-friendly adaptations of our messaging about empowering women.

Will this pop-up, like others before it, travel to other cities?

We’re hoping to take our show on the road—to New York and LA—and hoping to include more exhibits, experiences, and content. As we grow, we plan to add in content around the event, like wage-negotiation workshops and films about gender bias.