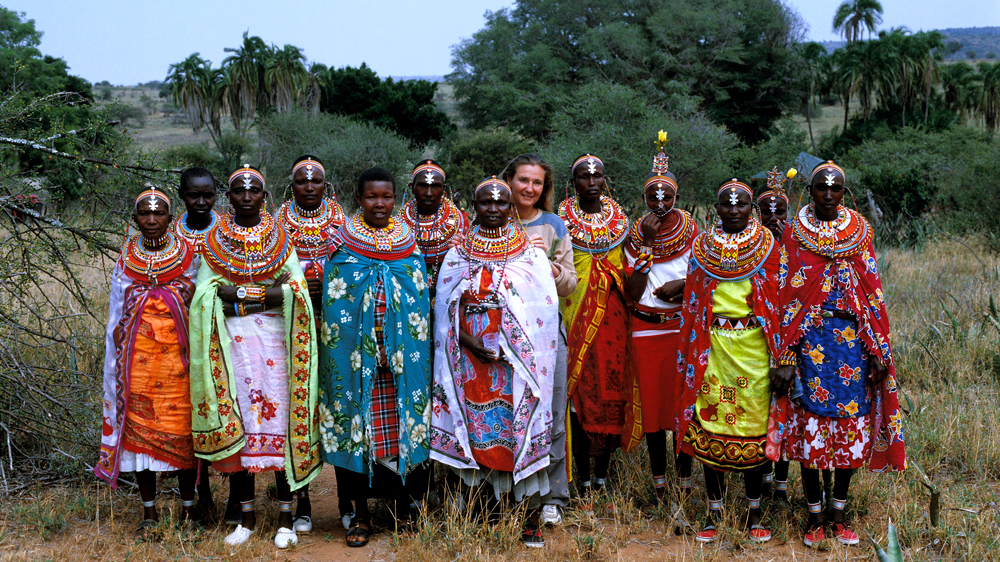 It’s been nearly 20 years since Nairobi-based designer Anna Trzebinski launched her eponymous clothing, jewelry, and accessories line, which has since attracted a global following of discerning customers. In building her enterprise, says Trzebinski, she has not traveled an easy road, but rather has taken a long and at times challenging journey, which has in the end brought a profound sense of reward. Muse recently spoke with the designer about the current craze for ethical design in the luxury space and the lessons learned from the women of Africa’s traditional societies.

What brought you to Kenya in the first place?

My parents moved to Kenya from West Germany in the mid 1960s, when I was an infant, as they had no interest in bringing their children up in dreary postwar Europe. For them, Africa represented a place of freedom and rebirth, which it remains for me to this day. My father was an architect who built us a beautiful house. Not long after they moved here, however, my mother, who was not happy in the marriage, left my father for a neighbor, Michael Cunningham-Reid, who happened to be the stepson of Lord Delamere, one of the first prominent British settlers in Kenya.

Trzebinski in the studio and fitting new garments.

What was it like growing up in East Africa?

Growing up I lived largely under the radar of my mother and stepfather’s very self-absorbed life. And while I had a privileged upbringing, with drivers and cooks and nannies and accounts at the local provisions store, I suffered quite a bit from emotional neglect. Luckily, our domestic staff provided the nurturing and care and love and safety that was otherwise lacking. I spoke [Swahili] fluently, ate what they ate, and basically felt entirely safe, loved, and at home among the local Kenyans, which really formed my DNA and became the foundation of my relationship to my country. My life was pretty dysfunctional but also full of adventure and freedom. I lived a carefree happy independent barefoot African childhood. Raw untamed wilderness was my playground literally right outside our gate. I have memories of leopard and giraffe drinking out of our pool at night.

What led you to launch your line of clothing and accessories?

I just needed a creative outlet. In 2001, my husband [artist Tonio Trzebinski] was having a show in New York and I took a suitcase full of my creations—fine woolen scarves and leather jackets embellished with Maasai and Samburu beadwork and beadwork bracelets and collars. A friend of mine arranged a meeting with the buyers for Donna Karan, and on our way back through London, I met the team at Paul Smith. As it turned out, I landed two substantial orders. But then my world was turned totally upside down. A month after 9/11, my husband was shot dead in a car jacking. He lost his life at the age of 41, leaving me with our two children, Lana and Stas, then aged 8 and 9. My world was utterly shattered. Ultimately, creativity turned tears and heartbreak into beautiful things and somehow that saved me. I also found unbelievable support among the amazing women I was working with—the Maasai and Samburu. Together, we have created, grown, and maintained our tiny Kenya-based artisanal couture house, which has enabled us to raise our kids together.

“Women are the heartbeat of this continent. They are the movers and shakers, but perhaps more important, women are the breadwinners, the ones that take responsibility for stability and raising the kids.”

Has it been easy doing business as a female entrepreneur in Africa?

Most certainly. If you think about it, women are the backbone of African society. Women are the heartbeat of this continent. They are the movers and shakers, but perhaps more important, women are the breadwinners, the ones that take responsibility for stability and raising the kids. Education is incredibly important in Africa and there is a huge pool of educated women, particularly now, as boys, who tended to be favored to receive schooling in the past, have not always proven so reliable when it comes to supporting their families. There is also a huge pool of women who themselves lack formal schooling but are determined to educate their own children and many of them happen to be skilled artisans. It is with this latter group that the beauty of my business comes in big time.

You have made a point of running an “ethical” fashion brand?

What is quite interesting now is that there is suddenly a desire for “ethical fashion,” particularly in the luxury sector, which I wholeheartedly embrace. But for so many companies wanting to capitalize on the concept, it is not quite as sincere as it sounds. A number of companies have come here with a desire to bring the women out of the villages and get them into factories to produce what turns out in many cases to be only a totemic amount of product…just enough to get a bit of PR value out of their enterprises. I have found that it is much better to have the women work on their own terms, coming together in communal workspaces within the context of their own lives and within the village support systems they have. We make a point of being sensitive to what works for the local pace and culture and life. In the end, everything we make is 100 percent biodegradable apart from some nylon threads used and a few buttons. We never overproduce, and our pieces are by design anything but seasonal. They are signature pieces that do not go out of style or they are one-of-a-kind heirlooms. We are upholding so many traditional ways of doing things.

Anna Trzebinski in her workshop.

You have become involved with the Samburu on a more personal level?

A couple of years after I lost Tonio, I wound up taking respite in the bush, in Laikipia, where I had spent quite a bit of time in the past. And it was on the second of these retreats that I met Loyaban Lemarti, a Samburu warrior and guide. His uncle had been one of the first guides I had met when I was 16. Lemarti and I fell in love and got married in 2005. And we wound up establishing Lemarti’s Camp, a high-end tented safari camp in Laikipia. We have a daughter Tacha, who just turned 12. But the marriage was not to last. When we separated, I so mourned that I would somehow lose this traditional way of life. Day by day, however, small groups of Samburu arrived at my doorstep— including my in-laws—welcoming me back, reassuring me that I was loved and would always be part of that place. And now that Lemarti and I have transitioned into a wonderful friendship, it all feels safe again. And I maintain a farm in Laikipia.

Trzebinski and her design team in the studio.

You have found a mentor of sorts in Ralph Lauren.

Ralph Lauren has been incredibly supportive over the years. We met in 2012, when he and his wife, Ricky, came to visit us at Lemarti’s Camp to celebrate their wedding anniversary during the winter holidays. At that time, he seemed quite taken by the authenticity of the pieces we had created and encouraged me to really expand my offerings. Of course, at that point I had no idea that I had built a “brand.” They sat me down and interrogated me, and Ralph invited me to New York, where we met to strategize on a path forward. He even suggested that I look to open a shop in New York, which we did consider. I actually opened a shop in Aspen for a couple of years. Last summer, I decided to bring the business home to Nairobi to regroup. Ultimately, we have chosen to host nomadic pop-up shops where our clients can get immersed in the cultures of Africa in a far more meaningful way. Ralph continues to be a source of encouragement and inspiration for me, especially since my return to Nairobi, where it all began.

Tell us about you vision for the brand going forward.

I think we have an opportunity to be a luxury brand for the next era, a brand that has traditional artisanal craftsmanship at its core. Where our sense of purpose and our community is not boardroom derived but is fundamental to how we interact with each other, collaborate, and do business. Everyone doing well is a core societal belief among the traditional societies in Africa—sadly one that you do not necessarily have in the United States or even Europe. We believe that our craftsmanship is second to none. With that, we are going to be building our business around bringing our products to our exclusive global clientele and doing so at scale. This will be the future of our business. To cater our most discerning customers, the global elite, and give them reasons to get closer with and to the brand.