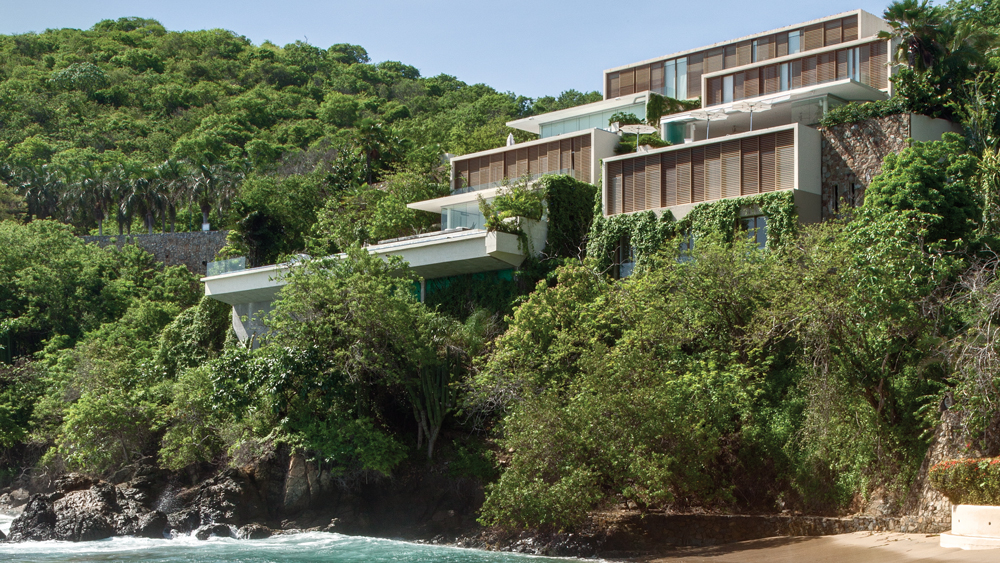 Manuel Cervantes Céspedes speaks with a kind of heartfelt earnestness uncommon in the world of architecture. When describing the works of his firm, Mexico’s CC Arquitectos, he uses words like “positive” and “active” and “conscious.” He doesn’t believe in the power of one man— he’s decidedly opposed to the notion of the starchitect. Rather, he believes in the creation of architecture to fulfill a human necessity.

A skylight carved into the roof of a courtyard at a Léon office complex.  Photography by Rafael Gamo

The glass walls that frame this minimalist home in Mexico City turn its living spaces into open-air environments.  Photography by Rafael Gamo

“I believe more in inspiring than exercising power,” says Cervantes Céspedes. “I think it’s more powerful to influence things in a positive way than to try to impose architecture on people. It’s easy to forget that architecture is a service for creating and resolving the needs of people.”

In Zihuatanejo, Villas Ventanas hugs the slope of a hillside. The residence’s sliding slatted facades help draw in light from every exposure.  Photography by Rafael Gamo

The inherent need that CC Arquitectos aims to resolve is a connection to nature. Cervantes Céspedes believes that architecture should be grounded in its location, absorbing its setting and employing local materials and skills in a way that ties every structure to its surroundings in a deep and meaningful way. “Each project we design in our studio is imagined for one place, one culture, one community, and one group of users specifically,” explains the 41-year-old architect. “There is no formula that can be imported or exported from one place to another.”

To that end, all of CC Arquitectos’ projects— whether a beach house nestled into the hills of Zihuatanejo or a horse ranch set in the mountains of the Valle de Bravo—are built to emphasize their natural setting. Giant roof cutouts bring the sky inward, facades wrap around existing trees and landmasses, and sliding glass doors disappear to remove the barrier between inside and out. The result is architecture that respects the character and culture of its site. But, more important, it’s architecture that transforms the way its inhabitants live, drawing them out from air-conditioned living rooms and hermetically sealed bedrooms to experience life as their ancestors did—with the wind in their hair and the ground between their toes.

When views aren’t an option, as with the Amatepec residence in Mexico City, indoor spaces open up to verdant urban courtyards.  Photography by Rafael Gamo

“For me, architecture is a shell created between the earth and the sky,” Cervantes Céspedes says. “The space we inhabit is a reconciliation of these elements. I insist on addressing the human piece of architecture—not the object.”

Paris Scene: What to Do In Between Couture Shows