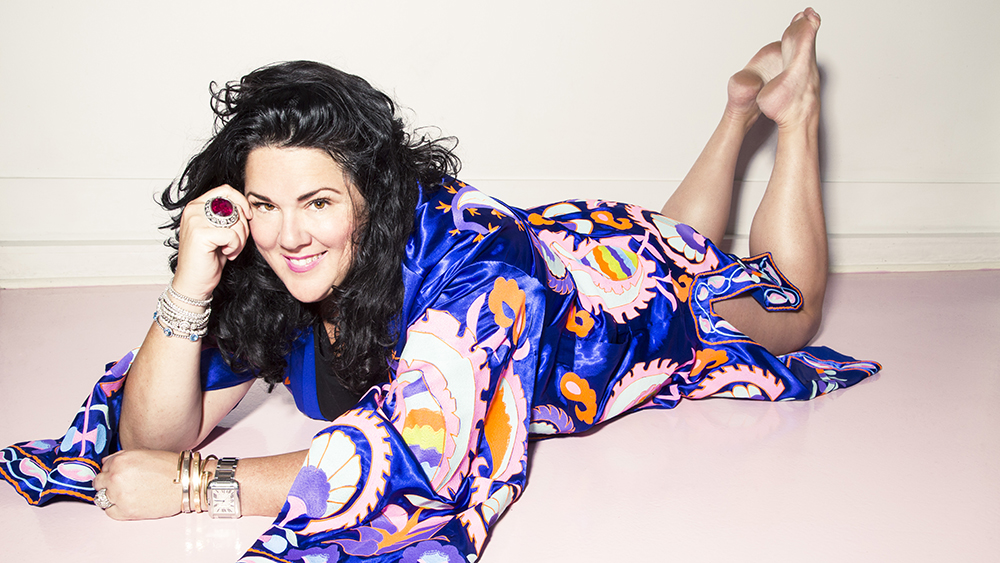 When you ask mixed-media artist and female-empowerment powerhouse Ashley Longshore what her ultimate career goal is, she doesn’t hold back for a second. “It’s to have an art career like Andy Warhol and to leave a legacy like Peggy Guggenheim,” she states blatantly. And its apparent she’s well on her way. The New Orleans–based firecracker is known for her obsession with pop-culture figures and brands as well as her relationships with celebrities and billionaire entrepreneurs. She’s made quite a statement in the art world for her paintings tied to the subject matter of American consumerism, culture, and Hollywood glamour (from Kim Jong Un in a Supreme shirt to Jesus surrounded in Louis Vuitton to Kate Moss as a nun, she’s done it all). But as notable as her art pieces are, she’s quite a statement all on her own. You’ll find her dressed to the nines on any given occasion, donning blinged-out metallic Gucci tracksuits and enough jewelry to fill a museum. She was just featured as the first female artist in residence at Bergdorf Goodman, and is working on a collab with Diane von Furstenberg, making its debut later this month.

We sat down with Longshore to grill her on the rise to the top as a female artist, and where she gets her inspiration.

How did you get into the business to begin with?

As a creative person I started to make my paintings, and as a true American I knew I could make this a business. Being broke as hell is the fuel that makes the fire burn bright.

Was there one moment in particular that you realized you were making a difference in the world?

How do you see the landscape changing for female artists?

I think now with social media and the changing political climate in the United States, people are responding to female artists now more than ever. Art is a reflection of all of our experiences, and female artists are crucial in depicting time right now.

Tell me about your next project with Diane von Furstenberg? How did it come about?

The CEO of the company, Sandra Campos, approached me and said that I was the perfect artist to paint powerful female leaders. The spirit of being a female leader encompasses self-confidence, and, as Diane says, zero time for fear.  I can relate to that.

How will you choose the works?

Diane and I have worked together, and she has curated an incredible group of powerful women.  I have learned so much.  I have also included women that have inspired me.

Who is the most inspirational woman you know?

That is like asking me what the most beautiful flower or my favorite Italian dish is. I have so many inspirational women in my life in so many different genres of work. They are mothers, they are fearless, and I look to them for inspiration and guidance.

What does your own personal art collection entail?

Well, as of right now it entails me getting a larger house. I wildly purchase art every time I sell art.  I buy sculptures, I buy paintings, I buy from artists all over the world.  I am one of those people that knows what I want the minute I see it, and if something inspires me and delights me and I can afford it, then it’s f**king sold. I look up to Peggy Guggenheim so much. I am really cultivating a spirit all around me of inspiration, color, and content. I wake up like a wild woman and can’t wait to get to my easel.

I wake up, I answer emails I’ve gotten from European clients throughout the night. I get my schedule for the day of conference calls from my team, I let them know what canvas I want, and then I twirl all around my studio like the f**king Tasmanian devil.  And while I’m making art, we’re selling art. A day without sales leads to a full body rash.

What is your ultimate career goal?

As of now, it’s to have an art career like Andy Warhol and to leave a legacy like Peggy Guggenheim.

What is one piece of advice you would give your younger self if you could?

I would go back to my early twenties and never give a damn because I should have known I could buy everything I ever wanted if I was willing to work for it and goddamn if I haven’t done just that.