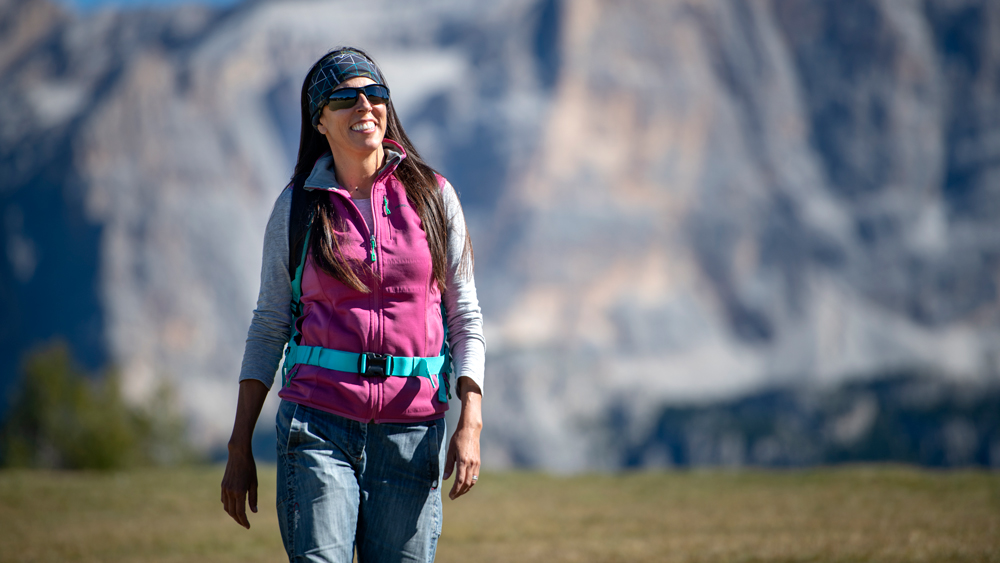 With her background in fashion and photography, Agustina Lagos Marmol should have been a natural at guiding visitors around Italy’s famous urban cultural centers. But during her time as a bike guide for luxury multisport operator Butterfield & Robinson, she found herself begging her boss not to assign her to Florence. “I’d fallen in love with Italy’s mountains,” says the Argentinian. “They reminded me of home.”

In a way, Marmol was destined for a life in the mountains. She grew up camping, fly-fishing, horseback-riding, hiking, rock-climbing, and skiing on and around her family’s estancia in Argentine Patagonia. Fashion obsessed from a young age, she moved to LA in her 20s to attend design school but quickly realized both the fashion industry and the LA lifestyle weren’t for her. Looking for an escape, she turned to her then boyfriend’s father, George Butterfield, founder of Butterfield & Robinson. His company was expanding into the Latin American market and Marmol’s fluent Spanish made her a perfect new hire. She started out stuffing catalogs in envelopes, but her sportiness made it a no-brainer to use her as a guide.

In 1994, after her first trip in the Dolomites, an area of the Italian Alps that stretches to the Austria-Italy border, she told her boss she wasn’t leaving. She settled in the South Tyrol and married an Italian mountain guide. “Suddenly I was hanging out with these hard-core mountain men, going on expeditions, and really getting to explore the area,” she recalls. “I realized how few people knew what was here. I saw potential in this area when no one else did.”

In 2009, Marmol launched her own company, Dolomite Mountains, focusing on hiking and skiing. Divorced and a single mother, she juggled raising her daughter, who is now 16, and guiding eight to nine trips a year. “I had au pairs for four years when she was younger and organized my schedule so that her father could watch her when I traveled, or sometimes I had to rely on friends,” she says. A rare alpine chameleon who could swoosh down colouirs with the best skiers but not be out of place sipping après-ski Champagne in five-star settings, she earned a reputation for being able to combine serious mountain adventures, local culture, and luxe touches. Word began to spread of her ski safaris and ski-touring trips—novel at the time—that allowed clients to discover the region’s incredible terrain and unique Ladin culture while staying in the best rifugios (backcountry lodges) and top hotels, like Hotel San Cassiano in Alta Badia.

Marmol’s excursions can include various activities, such as horse-back riding.

Today the company guides up to 2,000 clients a year and has grown to a team of 10 women and 30 contract guides, all of whom have been groomed by Marmol. “The Italian guides are very individualistic,” she says. “I had to teach them how to be diplomatic with the clients, to learn teamwork. I also taught them all to add #dolomitemountains to their Instagram.”

Marmol, who recently remarried this summer, is now focused on expanding her adventures to lesser-known parts of Italy such as Sardinia, where she offers hiking, biking, and sailing, and Lake Garda, a mecca for rock-climbing. She’s also launched horseback-riding trips to her family estancia in Patagonia. Her husband recently introduced her to windsurfing, her newest addiction, and she’s been scouting potential destinations, including Brazil and Hawaii. “I think it’s important as a business operator to stay curious,” she says. “I’m constantly traveling to discover new places and try new sports. If I am enthusiastic and passionate, my clients will be, too.”