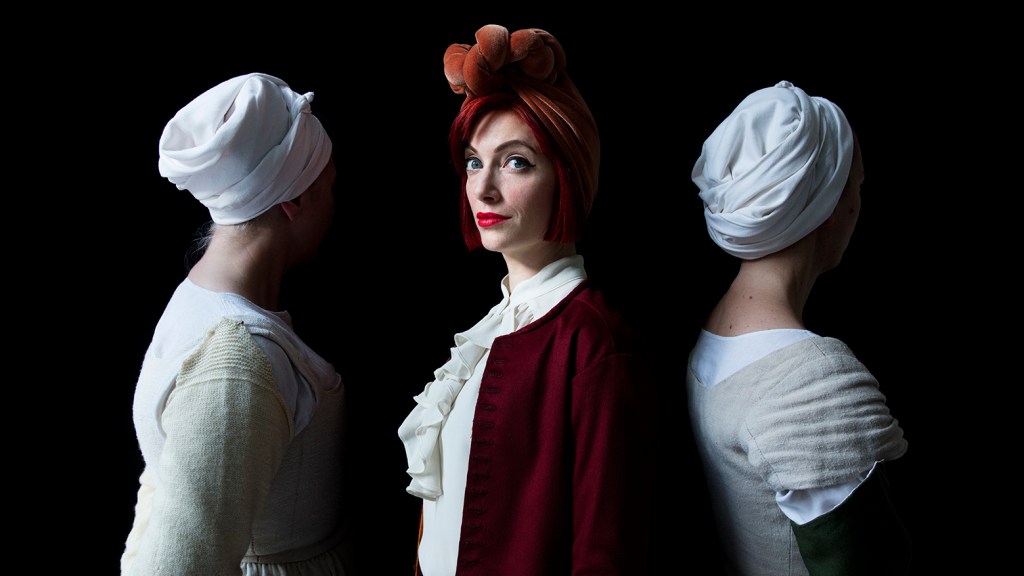 The women of the art world are the striking subjects of a new photography exhibition at London’s Weiss Gallery. The gallery, which is well known for presenting 16th- and 17th-century Northern European portraiture, has tapped the Dutch photographer Carla van de Puttelaar to create Artfully Dressed, a collection of 60 photographs that places its modern subjects—some of the world’s top female artists, gallerists, curators, and collectors—in an historic, Renaissance-style setting.

“Carla’s striking photographs, inspired by historical portraits, offer an insight into the women running the international art world,” says gallery owner Mark Weiss. Although the artist’s formal portraits are an attempt at aesthetic perfection through the lens of traditional iconography, he explains, they subvert that very trope. “Through her photography, [she] questions what constitutes female beauty, power, and, by extension, vulnerability.”

The theme in itself is a challenging statement at a time when gender equality in the workplace has resurfaced in the headlines. With Artfully Dressed, Van der Puttelaar aims to shine a light on that power imbalance by spotlighting women whose accomplishments in the art world have often been overshadowed by those of their male counterparts. (Among her sitters are such heavyweights as Zoe Whitley—curator of contemporary art at Tate Modern—and Derwent Special Award–winning artist Roxana Halls.) Muse caught up with the artist on the eve of her exhibition’s opening to talk power, equality, and inspiration in the world of art.

Artfully Dressed is a dramatic blend of past in present. What inspired you to portray these modern women in such an historical light?

As an art historian specializing in 17th-century Scottish portraiture, I have always had a keen interest in such imagery. When one studies portraits of centuries past, it is clear that every element in a painting is of particular significance, informing the viewer about the subject and their station in life—particularly through the garments they are wearing and the objects within view. Through my photography, I have chosen to similarly capture my subjects, showing them in natural light with dramatic backgrounds.

Why did you choose women of the art world as your subjects for this series?

When the gallery approached me about a possible exhibition, I wanted to do something that would resonate in a meaningful way. I decided to focus on women, as there are so many in the art world, but they tend to be under-recognized, being far less well known than their male counterparts.

How many women have you photographed for this series?

Nearly 150. Sixty photographs are on view in the exhibition, and 135 are included in a catalog for it, along with detailed biographies outlining the accomplishments of each of the women who participated.

How did you select them?

The project began with fellow artists and a number of professional colleagues at various museums, galleries, and auction houses, and grew from there. I have now photographed more than 140 women, many of whom I previously had not met, and several of whom have become friends.

How did photographing these women bring their stories to life?

In speaking with the women, I was amazed to hear what they had achieved and experienced. I asked each of them to answer six questions, like, what is your role in the art world? What is your earliest memory? Do you have any thoughts about the place of women in the art world? And then I asked them about what they were wearing. And through our conversations, I became even more in awe of what they had achieved and how they expressed themselves. I am indebted to all of the women who participated.

Some things became far clearer to me, such as inequality on more than one level. For instance, I did not encounter many women of color. This underrepresentation was voiced by one of the sitters, Eva Langret, the London-based gallerist who is director of Tiwani Contemporary. She told me, “The struggle for gender equality in the arts, like in other professions, must be intersectional. It is also about race, about class, about sexuality, and about disability.”

Do you plan to continue the project beyond the exhibition?

The exhibition may have more life as there has been interest in showing this body of work in America, so let’s hope that happens. But more importantly, the project has become a sort of vocation for me—something I would like to expand on to give credit and bring attention to these wonderful women. And it has inspired my own work.

Artfully Dressed runs through May 31.