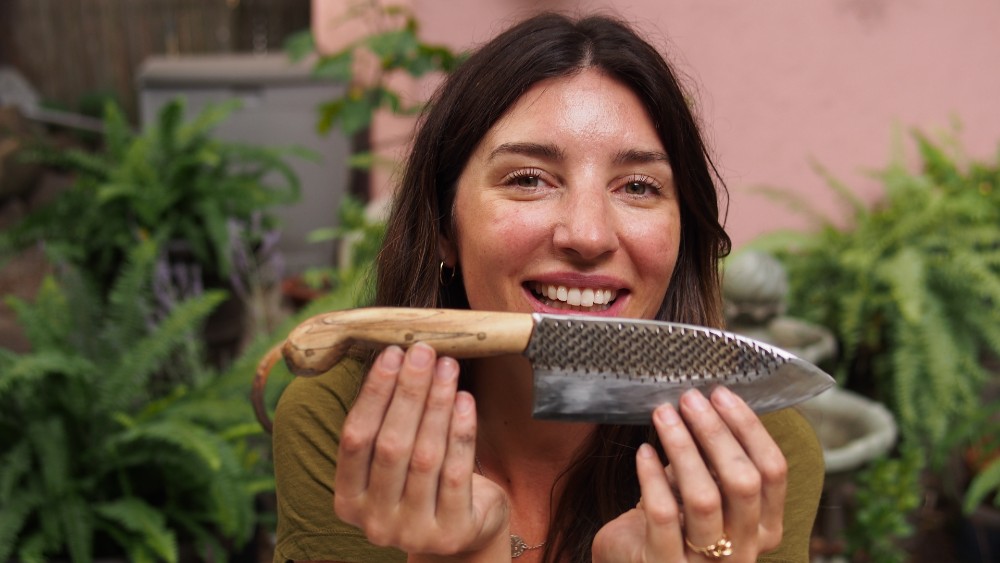 Vermont’s Northeast Kingdom is a long way from New York City, but knife maker Chelsea Miller, who grew up surrounded by untamed woods and farmland, has faithfully reproduced the spirit of the place in her Brooklyn backyard. Steps from her kitchen door, a workshop filled with heavy machinery and power tools sits behind a lush thicket of potted plants. Here, Miller carves and sands her knife handles out of spalted apple and maple wood from her family’s farm, and forges blades out of repurposed horseshoe rasps gathered from the surrounding area.

The knives are used in the kitchens and dining rooms of some of New York’s finest restaurants, including Eleven Madison Park, where they are part of the tableside cheese service. The average price of a Chelsea Miller chef’s knife is $800, and there is a year-long wait list. While Miller makes all her kitchen and cheese knives by hand in the studio, she’s recently begun selling sets of either six or eight steak knives, designed by her but manufactured in Thiers, France, by a family with seven generations in knife making. All of Miller’s knives, along with hand-carved cutting boards and leather knive cases, are sold exclusively on her website, ChelseaMillerKnives.com.

Miller didn’t move to New York to become a knife maker; she came to study acting. So how did she end up wearing goggles and gloves and working with fire and power tools, steel and wood?

“I had been living in New York for a number of years and had an okay acting career,” she says, “but I was dissatisfied. I want to work all the time and I want to be creating art all the time, and waiting for opportunities to come about just wasn’t my style.”

In 2011, almost 10 years after arriving in New York, her father became very ill. “I took that opportunity to just drop everything, go back to Vermont, reset and spend time with my dad,” she says.

She began fooling around in his workshop and found it therapeutic. “It really grounded me into this place I had lost touch with, which was not needing a script, not waiting for someone to say action,” she recalls. “It was me creating my own story.”

Chelsea Miller in the workshop  Photography by Liza Schoenfein

The new narrative involved hand-made knives that are at once functional objects and pieces of art, made from materials that are entirely personal to Miller.

“[When I was] growing up in Vermont, instead of a tractor my father used horses to log the land, and he built houses,” she says. “When I came back to what would be a knife-making career, he let me use a lot of scrap material, which happened to be horseshoe rasps, which I absolutely fell in love with, and that’s become my material of choice.”

The rasps are made from high-carbon steel, which is ideal for a knife blade because it holds a good edge and forms a nice patina over time, Miller says. And each one has a smooth side and a rough side — the latter having been used to file horses’ hooves — and so the knife comes complete with a built-in zester or grater.

Miller’s beautiful, unusual objects caught the attention of chefs and collectors rather quickly.

“My success has all come from word of mouth,” she says. “I started in my father’s workshop and then, during my first season as a knife maker in the summer of 2012, I took over a little booth at the Brooklyn Flea, which is a fantastic place to be because there are constantly writers and cooks walking through, and the buzz just started from there.”

It wasn’t just the knives that stood out. So did the “knife chick,” as she’s been called. “There aren’t many female knife makers in the industry,” she says.

She also gives credit to her parents. “They just gave us so much freedom,” she says. “We lived off the land, back to the land, and we were incredibly resourceful. And I don’t think I heard the word no until I was perhaps in my 20s. They really pushed me to pursue whatever it was that I wanted to do, and that, I think, has given me the opportunity to really get where I am.”

In reciprocal fashion, Miller wants to support other women who are interested in working in fields typically dominated by men. “I’m always encouraging girls to come to my studio and pick up a hammer,” she says. From the studio, they might take a short walk through the backyard into Miller’s kitchen, where more than a dozen of her knives and half a dozen cutting boards she carved adorn a red brick wall next to the stove.

“Looking back, the decisions that I’ve made in the location of my studios, they all get closer and closer and closer to my house,” Miller says. “And I realize that’s home to me, that’s what I know. My father’s workshop was always directly outside our door. Before it was his workshop it was the horse barn, so the horses were right outside our door. So having my workshop right outside my house feels so right to me.”