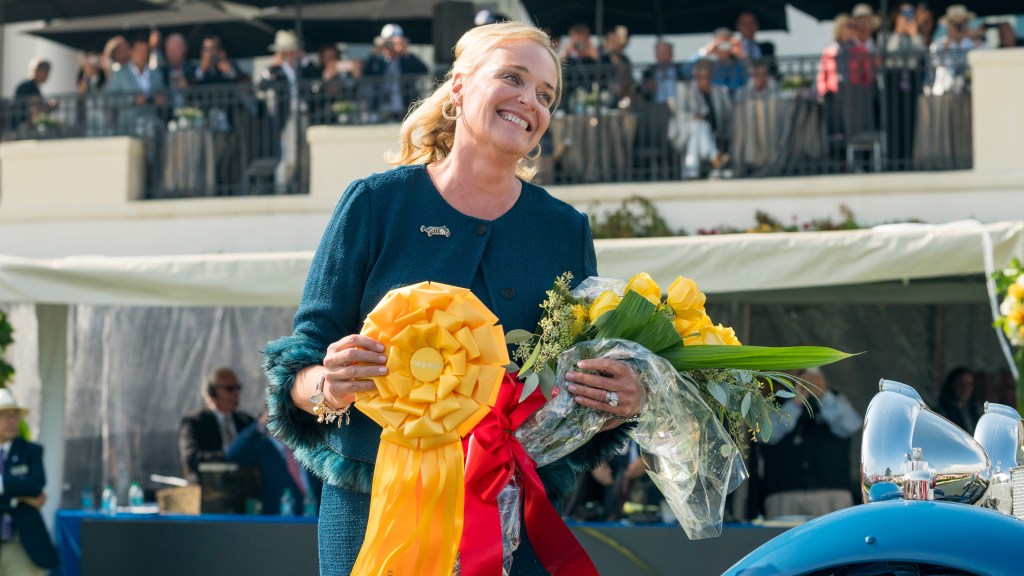 On Sunday, August 26, thousands of car enthusiasts will flock to the 68th Pebble Beach Concours d’Elegance, one of the world’s most celebrated automotive events. When the winners are named and the confetti is shot off, the woman to thank will be Sandra Button, Concours chairman, bona fide car fanatic, and champion of the classic-car community.

Button began her career more than 30 years ago as the director of special events for the Pebble Beach Company, which ran the Concours in addition to golf tournaments and other activities. In 1990, she convinced management to create a new department dedicated exclusively to the Concours, and she became executive director. In 2002, she became cochairman and, three years later, she took the reins completely. Over that time, the Pebble Beach Concours transformed from a beloved regional event to a bucket-list item for car enthusiasts all over the world.

“It grew up organically,” Button says when asked about the Concours’s exponential growth. But we suspect her answer is modest. During her tenure, Button not only helped decide which classic cars would be shown at the famed Lodge at Pebble Beach, she also worked with automobile manufacturers to bring new cars—and a lot more revenue—to the show. And although the 18th fairway is still reserved for the classics, Pebble Beach is now the venue of choice for many luxury and exotic carmakers to show their latest creations. “If you go in front of the lodge, there are 20 cars there that are the vision of the future. And I think that keeps people jazzed,” she says.

One of the biggest changes Button has seen is the Concours’s increased global reach. “Seeing people from Israel, China, South America, Australia, the East, and the Middle East—it brings a dynamic element to the event,” she says. When she recounts some of her favorite memories, the tales are as much about flesh and blood as they are about metal. Button remembers legendary racecar drivers Juan Manuel Fangio and Stirling Moss driving their 1950s-era Mercedes Silver Arrow racecars on the show field. “Those little tin bicycle wheels!” she recalls. “Imagine, two of the most famous racecar drivers ever on the ramp together. Those moments for me are the best and they’re pretty fleeing. A lot of people from that era are gone.”

“One of the many things I love about the car world is how the language of cars speaks to people across all backgrounds and in all parts of the world—without respect to political party or income or religion.”

Even today, it’s rare to see a woman at the helm of such an institution. But Button handles the question of gender with aplomb. “Being a woman in this business, my strength is that I feel a lot of passion and purpose … and I’m fiercely persistent.” Along with that persistence is an ability to not take things personally. “There are fellas that will have an issue with their car, and instead of calling me they’ll call my husband. But I always feel like whatever is best for the show, as long as the right cars get here, it’s fine. I don’t always think it’s gender that’s the issue; maybe people feel more familiar with someone else.”

Although the vintage-car world is still predominantly male, Button agrees that ratio seems to be changing. “I see more interest in the Concours and in judging from younger women than I’ve seen in a long time, and I hope that bubbles up and the passion stays. There are more ladies’ rallies and driving events. Like anything, I think if you get in the driver’s seat, it’s just a lot more fun. So the guys just need to become better navigators.”

Button and her husband, Martin, own about 25 cars and motorcycles, including a 1929 Bentley 6 1/2-liter Sedanca Coupe. “The radiator’s as high as my chest,” she laughs. “If you look through the photos of the Bentley boys, they were the badass guys of their era. I love everything about those cars.” As she talks, it’s easy to picture her as a teenager, enthralled with the 1965 Ford Mustang she shared with her father in Seattle. Since then, Button and her husband have driven their cars in road rallies all over the world. “The old car tours are like having a passport and getting to do things that you normally wouldn’t get to do,” she says. “Some of the most memorable times I’ve had are on the side of the road, just chuckling over the old clunkers and the stuff that can happen.”

Cars at the Pebble Beach Concours d’Elegance in the 1980s.

Those experiences have created an inextricable bond to her fellow car collectors, to whom she feels extremely loyal. In June, when the presidential administration announced it would levy a tax of up to 25 percent on imported cars and collector parts, Button, who says that “traditionally, politics has no place at a Concours d’Elegance,” sent an email to the Concours’s mailing list, urging fellow collectors and car buffs to make their voices heard with government leaders.

“One of the many things I love about the car world is how the language of cars speaks to people across all backgrounds and in all parts of the world—without respect to political party or income or religion,” she wrote. “I want to ask you to join me in thoughtfully reviewing and then perhaps commenting on a new U.S. government proposal that I fear might have very negative repercussions on our ability to share and celebrate and enjoy great cars.” Button get her message across, but does so with poise and grace.

Another point of pride for Button is the Concours’s philanthropic endeavors. When the Concours started in the 1950s, funds were raised for local charities by selling programs for $1 each. Last year, the event generated $1.7 million in charitable donations, most of which stays within the Monterey community. Button’s goal for this year is $2 million.

Button in a 1907 Rolls-Royce Silver Ghost owned by Millard Newman.

“We’re sensitive to the local environment, and it can be difficult with traffic, and we get over-loved. The fact that we raise money primarily from people who do not live there … that’s important because of the impact we have.” More than 70 organizations benefit from the Concours, including Boys & Girls Clubs of Monterey County, Animal Friends Rescue Project, and the area’s major hospitals. Button visits many of these in person and is able to see the direct impact the donations make. For example, Button recalls seeing a machine at one of the local hospitals that warms up the blood for patients before they receive a transfusion. “They’re smart to take you on these tours and show you what you’re actually funding. It’s so empowering to want to do more,” she says.

In 2020, the Concours will celebrate its 70th anniversary, and Button will have been with the event for 35 of those years. What then? “It’s always been my goal to get to that year, and then decide. Do they really want a 62-year-old lady doing this?” But it’s a safe bet that no matter what she does next, Button will still be playing with cars. In the meantime, she has a word or two to share with aspiring collectors: “I’d tell any male or female: Don’t worry about what level or what kind of car; just get out there and get what you can afford and just have fun with it. Get your hands dirty and see how everything works.”

Highest-Paid Athletes: 25 and Under Led by Allen, Osaka, Mbappe

‘Naomi Judd: A River of Time Celebration’: Memorial Telecast’s Producers Tell How the Show Came Together in Seven Days

To Get a Painterly Effect Without the Mess, Here Are the Best Oil Sticks