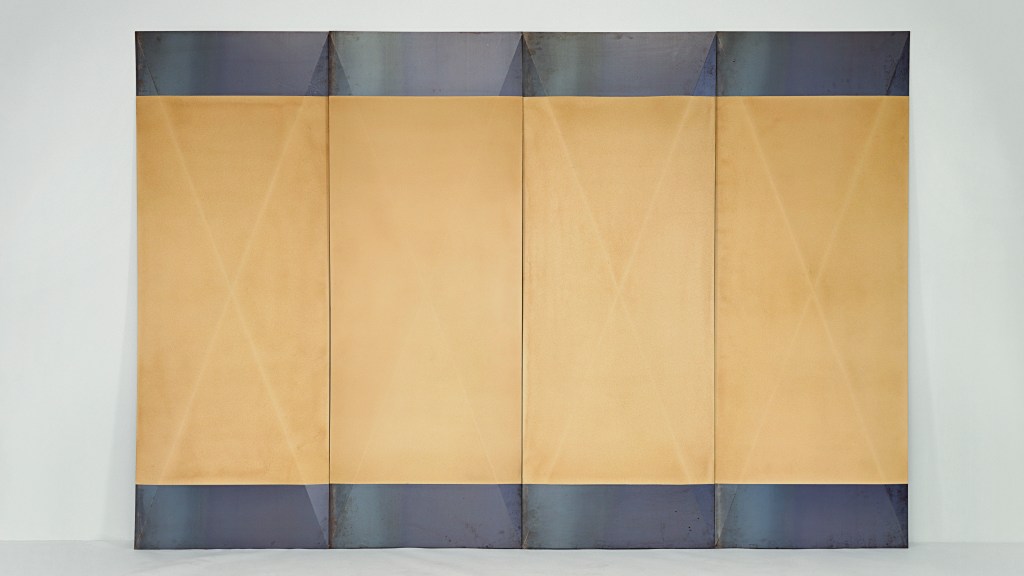 “Although I am a painter, I also have a doctorate in mathematics and so the structure of my work is mathematical,” says Dorothea Rockburne, in describing her oeuvre. “When you get into higher math, it’s thrilling. It’s living in another world. The way that mathematics always uses the elegant solution, my work has an elegant solution aspect to it. But explain it, I can’t. That’s why I do it, because it’s not explainable in language.”

With their myriad folds and recognizable ratios, her torn paper and rough metal assemblages, particularly those from the 1960s and early 1970, reflect her numerical grounding—the Montreal-born artist, now 85, having tutored under noted German mathematician Max Dehn during her years at Black Mountain College, near Asheville, N.C. A half-dozen of Rockburne’s seminal works are now on view at Dia:Beacon in Beacon, N.Y., where they are to be joined by a suite of more recent works in 2019.

“At Black Mountain College, Rockburne began to pursue a new language born from the understanding of the presence of geometry in nature as well as human-made surroundings,” says curator Courtney Martin, adding that the exhibition includes the artist’s first “topological painting,” Tropical Tan (1967–68). The work consists of four sheets of pig iron that have been creased along the diagonal axes and partially coated with a wrinkle-finish paint. Rockburne, she says, has referred to this body of work as “visual equations,” underscoring its aesthetic and analytical aspects. In time, her painting practice would come to draw on ancient systems of proportion as well as astronomical phenomena.

“As a painter, Rockburne developed a procedural form of art making; manually manipulated both fine art and industrial materials such as grease and tar, which were readily available and relatively inexpensive.”

When asked about the timing of the show, Martin says, it was the result of a 2015 conversation between the artist and Dia Art Foundation director Jessica Morgan. “Dorothea’s very direct. She said to Jessica, ‘Look, I’d love to work with you, but what are you waiting on? I’m over 80 and I don’t have a lot of time.’ Rather than being aggressive or mean-spirited, it was very realistic.”

For Martin, Rockburne’s work was seminal in shaping her own career trajectory. “As an undergraduate, it was very, very present in my curriculum. But perhaps it resonated with me because she was a female artist making important statements at a time when the art world was largely dominated by men. I remember that famous image of her installation Domain of the Variable on the cover of the March 1972 issue of Artforum, which stood out as this thing for me that like, ‘Wow. That’s amazing. I’m never going to see that in my life.’ All of her previous installations were based on the space that she was given or the space in which she was working, giving them an inherent ephemeral quality. But with her help, we have been able to re-create much of that early magic in this exhibition.”

As an interesting aside, the exhibition is underwritten in part by the fashion brand COS, which has taken its cues from Rockburne’s work ever since Karin Gustafsson, its creative director, saw it for the first time in “Dorothea Rockburne: Drawing Which Makes Itself,” an  exhibition that debuted at the Museum of Modern Art (MoMA) in New York in the September 2013. “What we really like about her work is that it is both strong but minimal at the same time,” says Gustafsson, adding that COS has made it a point of referencing the work of important female artists in the aesthetic of its collections—among them Anne Truitt and Rachel Whiteread.