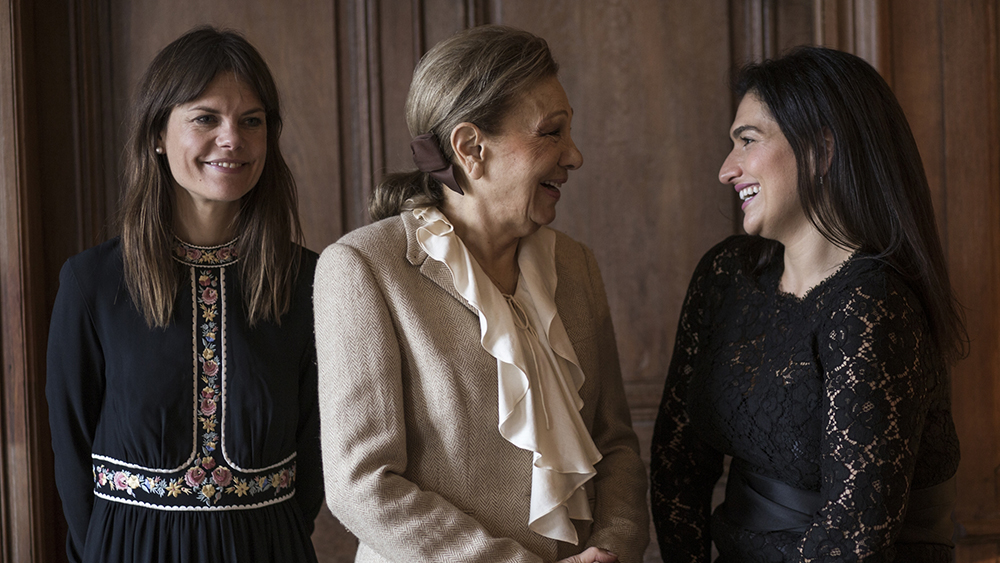 “For me, the day I was crowned empress of Iran represented the crowning of every woman in my country—a milestone marking just how far we had come in the struggle for equal rights,” says Farah Pahlavi, reminiscing over coffee at the Plaza Hotel in New York. The former royal has come to the city to celebrate the release of Iran Modern: The Empress of Art, a lavish new book—co-authored with Viola Raikhel-Bolot and Miranda Darling and published by Assouline—that tells the story of the extraordinary collection of modern and contemporary art that she built for the people of Iran before being exiled from the country during the Revolution of 1979.

Assembled with the help of curators and dealers from around the globe, the collection included works by Van Gogh, Picasso, Bacon, de Kooning, Rothko, Dalí, and Warhol, as well as seminal pieces by a host of Iranian artists—many of them purchased directly from artists’ studios. By the 1977 opening of her museum—which today is known as the Tehran Museum of Contemporary Art—Pahlavi had amassed more than 3,000 works of art.

Yet, as the book makes abundantly clear, her work as empress went far beyond her patronage of the art. Pahlavi was instrumental in establishing schools, medical facilities, and a host of regional museums, libraries, and cultural centers aimed at improving the lives of ordinary Iranians. Muse sat down with the royal to discuss how she changed the landscape of her home country through modern art.

What led you to establish TMoCA?

It grew out of a conversation I had back in the 1970s with the artist Iran Darroudi, who asked me why we did not have a museum to showcase work by Iranian contemporary artists. I immediately thought that that was a great idea. Shortly thereafter, I asked my cousin [noted Iranian architect] Kamran Diba if he would be willing to design such a museum and serve as its director, which he agreed to do. During the planning phase, it became clear that we wanted to exhibit works by contemporary artists from outside of Iran so that our students could be exposed to a more global world view. At that point, we were not looking to collect ancient works of art or major works of European art, largely because they were outside our budget.

How did you select works for the museum?

Before making acquisitions, we consulted with curators such as Donna Stein, as well as those at the Fondation Maeght in Paris, the Metropolitan Museum of Art in New York, the Fondation Beyeler in Basel, specialists at Sotheby’s and Christie’s, and dealers such as Tony Shafrazi.

You befriended Andy Warhol. How did that come about?

We actually met at a reception at the White House. I was quite interested in what he was doing and the whole pop culture scene so I invited him to visit me in Tehran. He and Bob Colacello [editor of Interview magazine] came to see me in 1976, at which time he took polaroid portraits of me and of my husband, the Shah, to create his silkscreen works.

What happened to the collection in the wake of the Iranian Revolution, when you and your family went into exile? Is it still intact?

It is. Thank God. So far as I know, only one painting is known to be missing and that is Willem de Kooning’s Woman III (1953). In 1994, the painting—which could not be shown in Iran because of its subject matter—was traded to David Geffen for the remains of a beautiful 16th-century illuminated manuscript, the Tahmasbi Shahnameh [Book of Kings]. Geffen has since sold the painting to Steven Cohen. The only other casualties I know of is my portrait by Warhol, which was deliberately slashed, and a Henry Moore bronze in the museum garden, which purportedly has a bullet hole in it.

Are there Iranian artists working today whose careers you are continuing to follow?

There are. Artists such as Parviz Tanavoli. I had one of his three-meter-high Heeches [heech is a symbol that means “nothing” in Persian] in our library in Tehran. And of course, his work is in great demand now. And then there is a new generation of painters, sculptors, filmmakers, and musicians. The Iranian people have been creative for thousands of years. You simply cannot change that by decree. And, in some ways, the revolution has fueled rather than quelled their creativity. So, I have continued to keep up with and support artists in Iran and outside of Iran where I can. And what is so wonderful is that for many of these young artists, I remember when their works were $2,000, $3,000. Now, in some cases, it is in the hundreds of thousands.

You said that for you, your coronation was a coronation of every woman in Iran. What do you mean by that?

In August 1967, almost eight years after we were married, my husband named me regent-designate in the event that he died before our eldest son came of age. This was literally unheard-of in Iran. Keep in mind, women only gained equal rights in Iran in 1963. But throughout our marriage, we were more or less on equal footing and so much of our social work was aimed at leveling the gender playing field in terms of education and opportunities.

Do you ever see yourself returning to Iran?

Not until the end of this regime. If I were to go in, I would never come out.