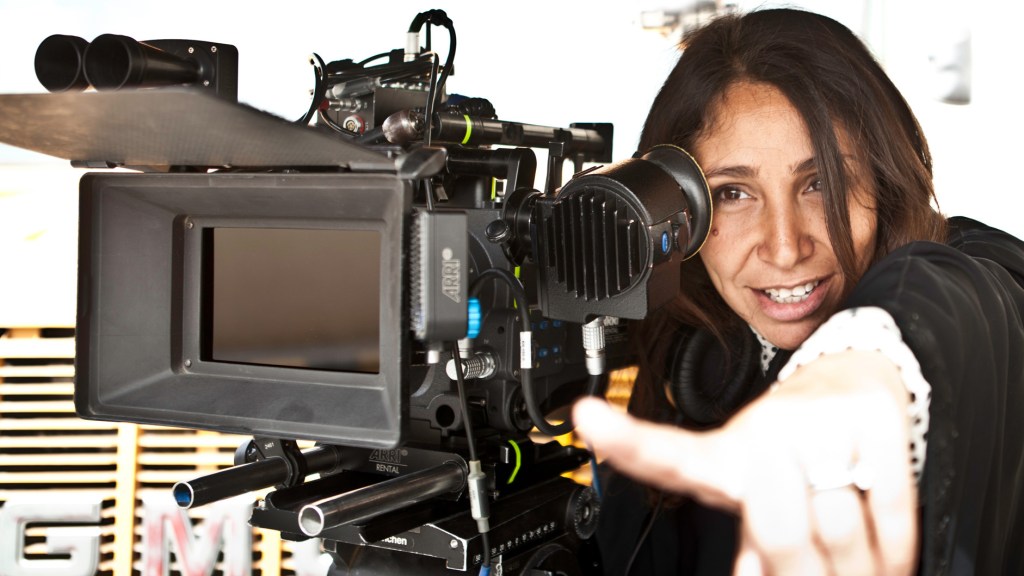 On the heels of the much-needed #MeToo movement, the spotlight has been on the negative experiences endured by women in cinema. But across the world, from Nigeria to Iran and beyond, countless strong women are also thriving behind the camera, overcoming challenges and doing their part to portray a diverse and nuanced range of female perspectives. Muse spoke with two such trailblazers redefining the cinematic landscapes in India and Saudi Arabia, and turned the spotlight on three other dynamic directors whose oeuvres you shouldn’t miss.

You could say Zoya Akhtar was born into Bollywood. When you grow up in one of the first families of Indian cinema—her father, Javed Akhtar, is a legendary screenwriter and lyricist; mother Honey Irani is a former actress and screenwriter; stepmother Shabana Azmi is one of the country’s finest actresses; and brother Farhan Akhtar is an actor, director, writer, and musician—you’d think Akhtar’s career path was a given. Not so. “I loved movies, but when I was growing up—in late ’80s and early ’90s—the movies were shit,” she remembers with a laugh. “I said, maybe I could go into advertising. But then I saw Mira Nair’s Salaam Bombay, and I was like, I want to be in films.”

It’s fitting that one of India’s best-known female filmmakers served as an inspiration, and later a mentor, for Akhtar. But what resonated most was how groundbreaking the movie was, in a somewhat forgettable era defined by over-the-top melodramas and cookie-cutter romances. “It was very contemporary, it was very real, it was completely India—and at the same time it was commercial. It had a banging story, it had a resonance.”

These are the hallmarks of Akhtar’s own cinematic patois. At first glance, some of her films could be seen as ultra-stylized confections with settings we dream of inhabiting and people we dream of being: the epic road trip through Spain by a trio of incredibly good-looking friends in Zindagi Na Milegi Dobara (“You Only Live Once,”), for instance, or the seemingly perfect and ultrawealthy family embarking on a Mediterranean cruise with two dozen of their closest friends to celebrate the parents’ 30th anniversary in Dil Dhadakne Do (“Let the Heart Beat”). But beneath the impeccable coiffures and preternatural six-packs lie incredibly complex—and immensely relatable—characters. The guys of Zindagi Na Milegi Dobara could easily be you and your BFFs; the trials and tribulations of the Mehras in Dil Dhadakne Do are scarily realistic, even if your own family meltdowns don’t typically unfold against the shimmering backdrop of the Aegean.

If these far-flung destinations find themselves becoming characters in her films, it’s only because they’re a fixture in Akhtar’s own life as well. “I love traveling. I spend all my money on it,” she says. “It’s always a cathartic experience in some way or the other. What I like comes into my work—I like food and all my characters keep eating. I like dogs; they’re in my films. I like traveling; it’s in my movies. It’s just part of who I am.”

But the travels add much more than just scenery; they lead to seminal moments in her plots. “I’ve done many, many road trips in and out of India. You always come out different from one. I’ve always wanted to make a film on that, and I did, with Zindagi Na Milegi Dobara. And Dil Dhadakne Do was a family story, so I needed to place it in a setting where they can’t leave. The ship was a good metaphor—when you’re a family, it’s sink or swim.”

But her latest film sees her casting her gaze on her hometown of Mumbai. When I meet Akhtar, she’s cocooned in an editing suite in Brooklyn, where she’s focused on post-production on Gully Boy, out in February 2019. It’s set against the rap scene of the Mumbai slums—about as far as you can get from a pristine Turkish beach or the Tomatina festival in Spain. “It’s just a story that really excited me,” she says of what inspired the fictional film. “I saw this video of this rap artist called Neezy and that was it. I was like: Who the hell is this? What the hell is going on?”

And while it might look like a departure from some of her earlier, more glamorous landscapes, for Akhtar, as always, it’s the personalities that transcend the places. “I like people: I like human interactions, I like spirit. I like dreamers, I like characters,” she says. “If there are stories that come close to those things thematically, those are things that excite me.”

“People are surprised to know I’m a filmmaker from Saudi Arabia,

where cinema was illegal just until last year.”

“I think it’s a stereotype that a lot of women in the Middle East don’t pursue careers like this,” says Haifaa Al-Mansour. “People are surprised to know I’m a filmmaker from Saudi Arabia, where cinema was illegal just until last year.”

Without movie theaters as an outlet, there were a lot of videos shown on TV at her childhood home in Al-Hasa, in the Eastern Province of Saudi Arabia. In a country where women have often been misunderstood and misrepresented overseas, Al-Mansour has gone on to fight stereotypes through celluloid; in the process, she’s also taken on the challenges of an ultraconservative society to express herself through a medium that isn’t exactly widely accessible.

“It was hard for me as a woman. I felt so invisible and I wanted to have a voice,” she remembers. “I started making shorts as a hobby, almost as a therapy. I found my voice through film.”

That voice became louder and louder as those early short films led to Women Without Shadows, an award-winning 2005 documentary about the lives of women in the Persian Gulf. And more astonishingly than that, her 2012 feature Wadjda, about a Converse-wearing Saudi girl who dreams of riding a bike, became Saudi Arabia’s official submission to the Oscars—despite not having any cinema halls to screen it in. “It was the first film in history to be submitted, and there was national pride,” she says. “People were more accepting of having a female filmmaker.” But since theaters were still a few years from becoming legalized, the film was shown at private exhibitions so that it could be eligible for the competition.

“Saudi Arabia went through a lot of eras,” she says, reflecting on how her career has transitioned through the zeitgeist. “When I started working, in 2005, people were very conservative. They were not used to having a female filmmaker. I was accepted by the more educated and liberals, but not really on a wide scale. Now it’s totally different. Now we can watch movies in movie theaters, and there’s more celebration for film—there’s a shift toward empowering arts.”

As rocky as the road to success may have been, the challenges Al-Mansour has faced in her career have been key to shaping her into a resourceful filmmaker. From struggling to raise budgets, to filming openly in the segregated streets as a female, to finding distribution when theaters weren’t an option—every step of the production process presented a hurdle for Al-Mansour, and she managed to sail over each one.

Now she’s taken these skills to Hollywood, where her talents have her overseeing an eclectic range of projects: She helmed the 2017 English period drama Mary Shelley with Elle Fanning; debuted a short film, The Wedding Singer’s Daughter, at the 2018 Venice Film Festival; and her latest release is the September Netflix movie Nappily Ever After, starring Sanaa Lathan.

“I don’t think I’ll limit myself to the Middle East. I’ll go wherever I find a script that inspires me—I want to be part of a thriving industry,” she says. And she has huge aspirations: “I want to make a $100 million budget film. It’s thrilling to be on top of the ladder of a huge budget film.” But no matter how far her career takes her, she’s sure to keep finding fresh ways to portray strong Middle Eastern women, something of a void in Western cinema. “I think women in the Middle East are portrayed as passive, and everything happens to them,” she says. “For me, I don’t think that is a character that I want to put on film. You want a character that owns its destiny.”

Other Filmmakers to Watch

Nollywood, as Nigeria’s booming film industry is often fondly called, is second only to Bollywood—and ahead of Hollywood—when it comes to sheer volume of movies produced each year. Which means standing out amid an onslaught of some 1,000 films is no small feat. So when first-time filmmaker Kemi Adetiba’s rom-com The Wedding Party broke all kinds of records in Nigeria upon its 2016 release, becoming the highest-grossing movie in the nation’s history, it was a noteworthy accomplishment. The New York Film Academy–trained director, who made a name for herself early in her career with her infectious music videos, is now poised to release her hotly anticipated second feature this fall—King of Boys, about a formidable businesswoman with political ambitions.

Growing up during Beirut’s civil war, Nadine Labaki was often forced to retreat indoors, where the television became a dominant force in her life. Those days of binge-watching rentals from the local video store wound up laying the foundation for a lifelong career in cinema. After a series of films that garnered her global acclaim, this year, when a 15-minute standing ovation followed the premiere of Lebanese actress-director Nadine Labaki’s film Capernaum at the Cannes Film Festival, the world really took notice. The heart-wrenching tale of a child in the slums of Beirut was pegged to be a contender for the prestigious Palme D’Or; in the end, it took home the festival’s coveted Jury Prize. The drama is a testament to the diversity of Labaki’s subjects and her commitment to showing a broad range of experiences across Lebanon. Her previous outings, Caramel and Where Do We Go Now?, dealt with women in upper-middle-class Beirut and women rallying to avoid communal conflicts in a remote Lebanese village, respectively.

Though Iran remains an enigma to many Americans, the country has become known for its rich cinema, with offerings that have become fixtures on the global film-festival circuit. At the forefront of the country’s industry is Narges Abyar, whose movie Nafas (“Breath”) was Iran’s official submission to the Oscars last year—she also took home Best Director awards from film festivals as far-flung as Vancouver and Tallinn. Abyar’s films often share varied perspectives on Quotidien life during the Iran-Iraq War of the 1980s: Nafas filters the period through a child’s perspective, while the 2014 drama Track 143, based on a novel written by Abyar herself, tells the story of a mother in search of her missing son.

Ukrainian Designers Carry On Despite the Russian Invasion