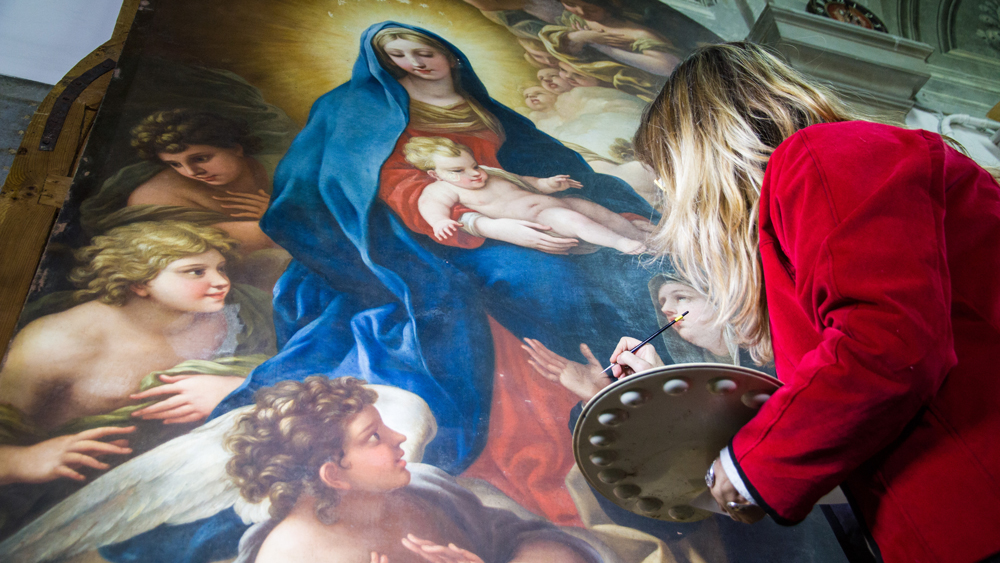 If you don’t know the name Artemisia Gentileschi, you should. The Italian painter was breaking glass ceilings and busting through old boys’ clubs back in the Renaissance. “What few people realize is that there were, in fact, a number of successful female artists working in Renaissance Italy, including the Baroque painter Artemisia Gentileschi, who is notable for having out-earned most of her male counterparts,” says Linda Falcone director of Advancing Women Artists (AWA), a Florentine not-for-profit established by the late art patron Jane Fortune a decade ago for the sole purpose of discovering lost works by female artists and restoring them for exhibition.

On October 17, AWA will ceremonially unveil Sister Plautilla Nelli’s The Crucifixion, one of 61 important paintings rescued and restored by the foundation, at the San Salvi Museum in Florence following a two-year-long restoration.

“Painted in the 1570s, The Crucifixion was actually commissioned by a woman,” says Falcone, explaining that the prioress of Nelli’s convent had asked the self-taught artist to paint her “spiritual visions.” “Women who had something to say in the Renaissance would often claim to have come by their knowledge or opinions through ‘visions,’ as it was a socially acceptable way of expressing themselves without having to argue about it.” A second Nelli work, The Last Supper, a massive painting measuring 21 feet by 6 feet, is currently undergoing a four-year restoration slated for completion in Fall 2019. Painted in the 1570s and considered a masterpiece, The Last Supper is the largest known painting by a female Renaissance artist. Following its restoration, the painting will go on display at the Santa Maria Novella Museum.

The mission of AWA, says Falcone, goes beyond merely restoring great works of art by women, some of whom happen to have been the daughters of famed male artists. The organization’s broader goal is to restore what she calls the many missing chapters in the annals of art history.

to have come by their knowledge or opinions through ‘visions,’ as it was a socially acceptable way of

expressing themselves without having to argue about it.”

“Our restoration budgets include ample funds for research and documentation and, for larger projects, the publication of a volume chronicling the research and discoveries made during the restoration process. A few years ago, we restored a work by the 18th-century artist Violante Siries Cerroti. When we started researching her, we did not even know the names of her parents or where she worked. As a result of our archival research, she now has a known body of work and an identity. So, we are not only restoring the works of art but restoring the artists’ stories. For us, restoration is a valuable tool for recovering their lives.”

What is readily apparent from the research, Falcone says, is that many of these women were very successful in their day. “They were traveling and earning money. It’s just that history hasn’t remembered that. It is important to remember that their relative obscurity came centuries later.” A case in point, she says, is Plautilla Nelli, who earned sufficient money to establish a female artists’ workshop, which was absolutely revolutionary for her time.

The restorations, says Falcone, can take anywhere from months to years, depending on the size and complexity of the work, and cost between $50,000 and $200,000. The one criterion that must be met for all projects undertaken by AWA, is that the restored paintings must go on display. AWA’s cadre of restorers is also a bit unique in that it is an all-female team. “Historically, art restoration in Italy, and in Florence in particular, was very much a male-dominated field—that was until the devastating floods of 1966.” In the wake of the disaster, she says, female artists from all over the world flocked to Florence to aid in recovery and restoration efforts. As a result of that legacy, today there are hundreds of female restorers and curators working in the city.