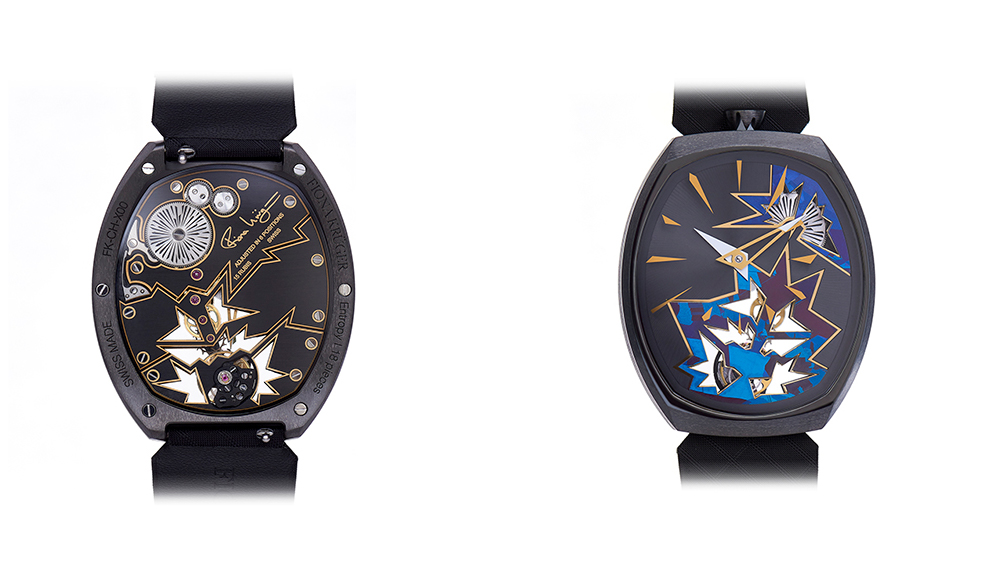 Considering we live in a world where nearly anything can be unisex—from clothes to haircuts—it’s surprising that Krüger’s take on timepieces might be considered radical. But many watch brands still adhere to prescribed styles based on gender: Men’s watches should be bigger and bulkier, with more technical detail; women’s watches should sparkle. “There are certain assumptions that come up when you’re developing the design of your product,” says the Scottish horologist and founder of Fiona Krüger Timepieces. “I got a lot of suggestions about putting diamonds on things and working with mother-of-pearl and making things very soft.”

Soft her watches are not. Krüger—the only woman to have her own namesake watch company, and a clear outlier in the notoriously male-driven Swiss watch industry—prefers a bit more edge. Her first timepiece, which she released in 2013, was a skull-faced incarnation reminiscent of Mexico’s Día de los Muertos skeletons in a large case measuring 48 x 34.5 x 9.8 mm—and that’s the small version. Visually the watch is all rock ‘n’ roll, with the kind of meticulous interior mechanics that real watch collectors, both female and male, admire. Just as intended, that timepiece and other Krüger releases that have followed have been scooped up by aficionados of every kind, including a female university professor, an 80-year-old male watch collector in Japan, and a male Swiss scientist, to name just a few.

Though Krüger clearly colors outside the lines, her watches are produced with Agenhor, the high-end Geneva-based company that makes movements for everyone from Hermès and Van Cleef & Arpels to Parmigiani and MB&F. Agenhor founder Jean-Marc Wiederrecht and his two sons are so fond of Krüger’s imaginative designs that they helped create a custom watch movement for her second collection. That’s a huge investment in a six-year-old brand, because it can take several years and millions of dollars to develop new movements.

The resulting Chaos Collection—a graphic and philosophical follow-up to her skull watches— debuted last fall with an Agenhor custom movement, which, set within a 48 mm titanium case, exposes its parts through jagged apertures to depict a conceptual explosion. It’s not just a functional component—it’s aesthetic, too: Even the wheels have been skeletonized and the barrel cover engraved to demonstrate the orderly disorder.

Chaos is a clear evolution of the rebellious Skull Collection: Its bold designs, in three colors, are like something out of a comic book, with names like Purple Pow, Black Bang, and Cobalt Crash. The tonneau-shaped watches are also a manifestation of their maker’s mindset. Her sketchbook (itself a work of art) reveals disparate sources of inspiration—from quantum physics to an anarchic Dada collage to a Basquiat painting—that boil down to a truly in-your-face watch design. They may not be for everyone, but they are in fact made for all.