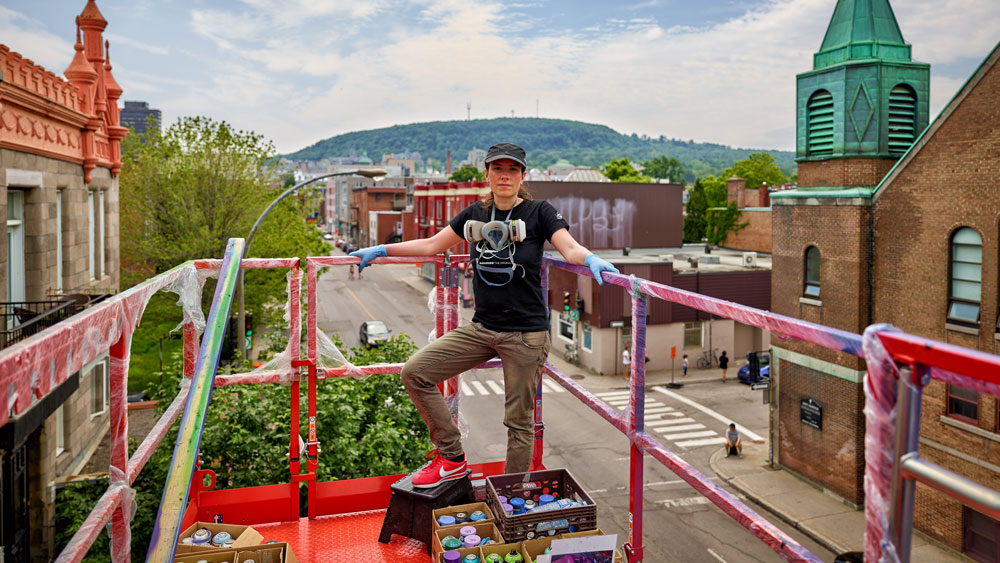 Street art and murals have become mainstream—welcome pops of color on facades that need a facelift, especially in areas that could use a little more cheer.

Today, sprawling 1,000-foot-tall murals grace some walls of almost every major city, with themes ranging from celebrities to politics. Once almost exclusively the domain of men, street art evolved from the stencil graffiti subculture in the 1970s that was often associated with vandalism, stolen paint, and tagging (the art of leaving your signature on impromptu-painted walls). Artists sought to create a unique street-art voice so viewers would instantly recognize whose work it was.

It could be argued that street art owes a debt to several cultures that embraced the art of large-scale paintings. These are cultures that may not have not applied the term “street art” to describe their work. Esther Mahlangu from South Africa, now in her 80s, is one such example. She is a member of the Ndebele nation, known for painting their houses in colorful designs. Her murals often reference geometric patterns found in the clothing, jewelry, and customs of her tribe.

Today, women muralists are literally painting the town red. From Montreal to Paris, these fearless female street artists have no issues jumping on cranes with cans of spray paint in hand, and have virtually become household names, commanding the attention reserved for rock stars and celebrity chefs. Many women street artists have substantial social media entourages (@Faith47, who goes by FAITH XLVII on her Instagram channel, has more than 67,000 followers). Here are five modern female street artists who are changing the landscape.

The South African–born artist lives in Los Angeles and goes by the unforgettable moniker Faith XLVII. “I did not study through any traditional art schools but rather am self-taught, figuring out mediums and how to put a voice to them through my own explorations,” she says. She works with mixed media, including video, projection mapping, oil paintings, and installations, and has her roots in graffiti culture.

Many of Faith’s murals have transformed abandoned buildings and ruins. Her work primarily deals with themes such as questions about existence, the archetypal nature of things, the decay of time, and the substance of reality. The subject of empathy surfaces a bit in her work, as does the issue of homelessness in Los Angeles, and the notion of peace in a time of growing polarity.

She says that being a female street artist in a “predominantly patriarchal” society is challenging, but “I have always worked very hard on my craft and forwarding my work and not using my sexuality as the selling point,” she says. “I do explore sexuality in some of my work, but this is from the view of the female gaze, not the male gaze.”

Faith’s work has been featured in solo exhibitions and art fairs in South Africa, murals all over the world from Vancouver to Miami, and in group exhibitions and symposiums.

Casañas grew up in North Philadelphia in a Puerto Rican household. She has been painting for more than 20 years. “I began when I was 14 and no longer able to walk around in my own neighborhood because of the constant gun violence,” she says. “I believe that public art can be used to change the social conditions of a community and can instill a deep sense of dignity and pride in spaces where people’s stories have been overlooked or made to seem insignificant.”

By creating spaces where the community can actively participate in the process, her art has become a catalyst for healing in areas associated with violence and trauma. In 2007, she started the grassroots Semilla Arts Initiative, and opened A Seed on Diamond Gallery in 2010 as a community-based place to tell stories through music, spoken word, dance, and the visual arts.

“My work does not only focus on Puerto Rican heritage, but on stories of people of color from various countries,” she says. “I am inspired by the stories of everyday people who struggle and work hard to provide for their families. I am inspired by marginalized communities and showing the humanity of their stories.”

The process of creating a mural begins with a conversation, with a deep understanding of who lives in the neighborhood she paints in. “I want to know what things they hold with pride. I want to highlight things that may sometimes be overlooked.”

Casañas’s work has been featured on buildings in Buffalo, New York (through the Albright-Knox Gallery), Philadelphia (through the Porchlight Initiative and the Mural Arts Program), and urban art festivals.

A work by Betsy Casañas.

“We have a lot of social issues in my country,” says TamOonz, who hails from Tbilisi in the Republic of Georgia (part of the former Soviet Union). “But I’m trying to stay more positive in my art.”

Oonz has been painting since childhood and received inspiration from her father (also an artist) while growing up in Amsterdam. At that time, the city did not have as much street art as it does now, and she wanted to be the one to facilitate that change by painting murals. “So I did it,” she laughs.

International street-art festivals started to invite her to participate starting in 2012. TamOonz does not have one specific style: Hers is a set of ever-evolving skills in illustration, and fine and digital arts with the constant desire to paint and express her inner world. “Traveling and meeting new people and seeing new places are very important to me,” she says. “I like to move around. It gives me so much energy and zest for life.”

She approaches large-scale works first through an inner visualization, and she says she has not specifically encountered too many gender issues. “People are more curious when they see a girl painting a big wall,” she says. “We live in a world of stereotypes and I’m happy I’m ruining them in a way,” she laughs.

Oonz’s work has appeared in street-art festivals including Upfest in Bristol, UK; Kosmopolite Art Tour in Belgium; Batumi Graffiti Festival in Georgia; and the PRASAD festival in Nepal. Recently, she painted a 3,229-square-foot (300-square-meter) wall in Sairme, Georgia, which is her largest work to date. She just signed an agreement with museumshop.ge for her work to appear on tees, bags, and other items; recently, she did the artwork for a student credit card for the Bank of Georgia.

Known for her moustache, huge four-eyed characters, and paintings of hairy men, Kashink is a celebrity in Paris, both for her talent and her persona. She started sporting her moustache when she went out partying, and then for openings and live performances. The name “Kashink” comes from an onomatopoeic word she remembers reading in a comic book when she was a teenager. “I can’t remember if it illustrated someone pulling a sword or crashing a window but I loved how it sounded. It became my tag name later on,” she says.

The idea of questioning aesthetic codes—in art as well as everyday life—and challenging norms results in messages of activism and equal rights in her art. Street art is what allowed her to get visibility, and, though she started tagging in high school, she found her style later on. Spray paint became a favorite medium because it allowed her to work faster on big surfaces.

“Every wall I paint is like a performance,” she says. “Especially when it’s illegal.” She never sketches anything before hand, so she can be completely free. Kashink likes to see the wall in person before painting, to determine the size and texture before the transformation process.

“What inspires me in the first place is the infinite diversity of humanity and the search for identity.”

One of the few active female artists in the French graffiti/street-art scene, Kashink’s work has been shown in many galleries from France to the UK. Currently, she is working on an installation for the Contemporary Art Biennale debuting at Le Havre in September.

The German artist who has been painting walls for 22 years never intended street art to be her career. “I started painting graffiti when I was a teenager. I simply wanted to be part of this movement and make a name for myself within this community by painting,” she says.

By painting without labels (she doesn’t necessarily see herself as a “performance” or “street” artist), MadC (whose full name is Claudia Walde) just wants to create and bring out her imagination. “I paint with my heart and soul, not with my head,” she says. Her inspirations still derive from the graffiti subculture, lettering, and powerful physical movements performed while painting a wall.

To get started, she only needs a photograph, the location, and size of the wall before she decides on the paint and colors. Today, Claudia receives several commissions annually from around the world that give her complete creative freedom. “Traveling is a huge inspiration to me,” she says, “Because it forces you out of your comfort zone, which triggers different parts of your brain and emotions.”

Born in Bautzen, Germany, she has painted murals for the Sinkka Museum in Finland, at Wynwood in Miami, and the Mural Arts Program in Philadelphia. Her upcoming solo show opens on October 25 at the Kolly Gallery in Zurich.

Claudia Walde and one of her murals.  Hendrik Schmidt/Epa/REX/Shutters