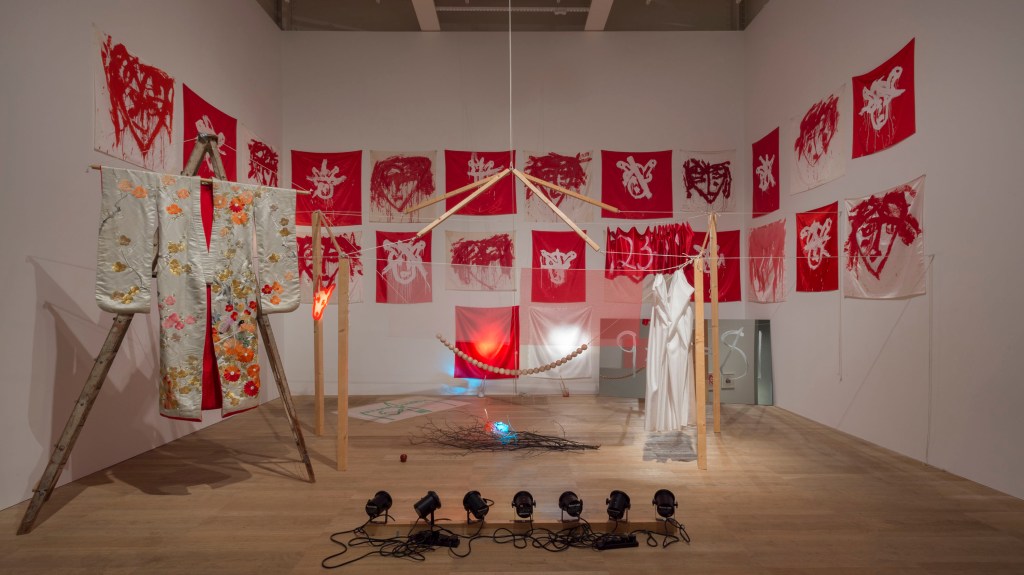 “Joan Jonas is an incredibly relevant artist because performance, video, drawing, and installation have all been part of her practice since the late 1960s,” says Andrea Lissoni, senior curator for international art and film at London’s Tate Modern, adding that no other artist has embodied such seamless coexistence of these media. Perhaps more important, explains Lissoni, her influence is evident in the work of artists who continue to pioneer new forms of storytelling, namely Jumana Emil Abboud, Rosa Barba, Tamara Henderson, Sung Hwan Kim, Laure Prouvost, Rachel Rose, or Hito Steyerl, to name just a few. Lissoni is the curator of Jonas’s highly anticipated London retrospective, which opened on March 14.

Muse had a chance to chat with Jonas, who turns 82 this year, on a recent visit to Berlin, where the artist was concluding a year-long project, serving as a mentor in the Rolex-sponsored Mentor and Protégé Arts Intitiative.

You were originally trained as a sculptor, what led you into performance art?

I began experimenting with live performance—the use of masks, video, and other props—in the 1960s, not long after meeting pioneering choreographers Trisha Brown and Yvonne Rainer, whose groundbreaking work I admired. As I began to shift from sculpture and step into performance, however, I took my knowledge and experience I gained through sculpture with me, but the transition seemed a natural one.

I have always been enchanted by the art of storytelling, in particular Japanese Noh theater and ancient Greek plays, and I have long believed that there was a relationship between literature, music, the visual arts, and theater. So, all of these disciplines came to figure in my work, from the beginning, really. And while we are on the topic, I should say that people tend to call me a performance artist. I don’t like that term, because it doesn’t mean anything. I prefer to think of myself as a visual artist.

What motivated your interest in climate change and the environment, which figure prominently in several recent works?

Human beings have what can only be called a complex and unbalanced relationship with our planet, which has been a long-time concern of mine. So naturally, issues concerning the environment—particularly climate change and extinction—have become increasingly important. One of my most recent projects, Oceans—Sketches and Notes, has focused on our fragile oceans. It is a video performance I began developing and actually performed in Kochi in December 2016. Since then, I have been working with a marine scientist to further develop it. The more we discover about ourselves and about fish, the more we see the similarities and know that we came from the ocean. I will be performing the work at Tate in May.

You recently traveled to Vietnam as part of your Rolex-sponsored mentorship of the artist Thao-Nguyen Phan. Tell us about that experience.

Thao is a fantastic artist, by the way, and we learned a lot from each other. I am not sure who was mentor and who was protégé. I am interested in other cultures and in other countries, which is part of my work, and I think that certain experiences have the power to alter your life. And going to Vietnam as an American who lived through the Vietnam War was one of those experiences. It was very moving for me. War is dreadful, and the Vietnam War is a prime example of just how dreadful war can be more generally. But there was this otherworldly element I discovered, a spiritual element to the country, which I saw because of Thao. I have always been fascinated by ritual and ceremony and, among other things, we had a chance to visit an artisan who makes beautiful ephemeral paper votive objects for burning as part of the Mother Goddess cult. I recorded quite a bit of our journey to Vietnam and it is part of one of my Tate installations.

Do you have any advice for young artists?

The reality today is that artists must understand how to negotiate with the art world—how to handle showing their work in different parts of the world on their terms. It is also important that young artists eschew any notions of self-censorship, no matter what sort of external pressures they may be under because it compromises their ideas.