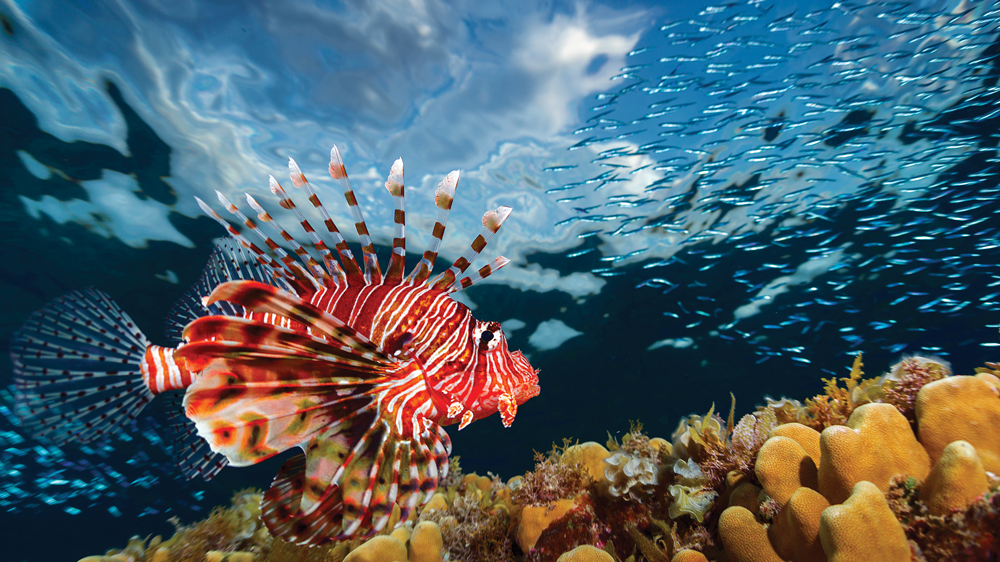 This striking creature may be stunning to observe, but the red lionfish is the Caribbean’s most formidable hunter—a venomous and invasive exterminator of fragile coral-reef marine life. The tiger-striped species, which is native to the Indo-Pacific region, is known for its voracious appetite: A single lionfish can reduce young reef populations by up to 90 percent in just five weeks.

In the Bahamas, Michelin-starred chef and all-around good guy José Andrés is helping to eradicate this beautiful destroyer by billing it as an island delicacy at Fish, his new restaurant at the Cove at Atlantis on Paradise Island. For Andrés, cooking up light and flaky lionfish—which he prepares simply fried, whole, with fresh herb oil and a side of tartar sauce—is a win-win.

“First of all, they are delicious,” Andrés says of the fish, which in the Bahamas have been estimated to consume roughly 1,000 pounds of prey per acre every year. “By serving this dish, we are helping the ecosystem of the Bahamas’ waters and supporting local fishermen.” A portion of sales from the dish is also donated to the Atlantis Blue Project Foundation, an organization dedicated to Bahamian marine conservation.

Not long ago, simply creating delicious food was enough for the culinary world. But today, Andrés and other chefs and restaurateurs are using their powers for a greater good. Jamie Oliver’s London restaurant Fifteen, which is owned by his charitable foundation, trains disadvantaged youth, the unemployed, and the homeless in the culinary arts. Alice Waters’s Edible Schoolyard Project educates children in public schools about food and nutrition. Tom Colicchio advocates for the Supplemental Nutrition Assistance Program (SNAP) to shine a light on the politics of hunger. The list goes on.

But perhaps nobody embraces the global good that can come from food quite like Andrés. In February, the owner of ThinkFoodGroup, which includes more than a dozen restaurants, was named the James Beard Foundation’s 2018 Humanitarian of the Year for his dedication to hunger issues around the world. In the wake of recent disasters, his nonprofit World Central Kitchen (WCK) activated chefs in Texas, California, Hawaii, Guatemala, and beyond. After Hurricane Maria, Andrés and WCK served more than 3.5 million meals in Puerto Rico alone.

“There is something deep in our DNA that centers around food, and chefs have both the power and the responsibility to be a part of that conversation,” says Andrés. “We have an amazing perspective on how we can support our communities, our cities, our countries. And to me, one of the most important ways to bring a community together is over a satisfying, comforting meal.”

Disney’s Iger: ESPN Is Not for Sale as Company Restructures