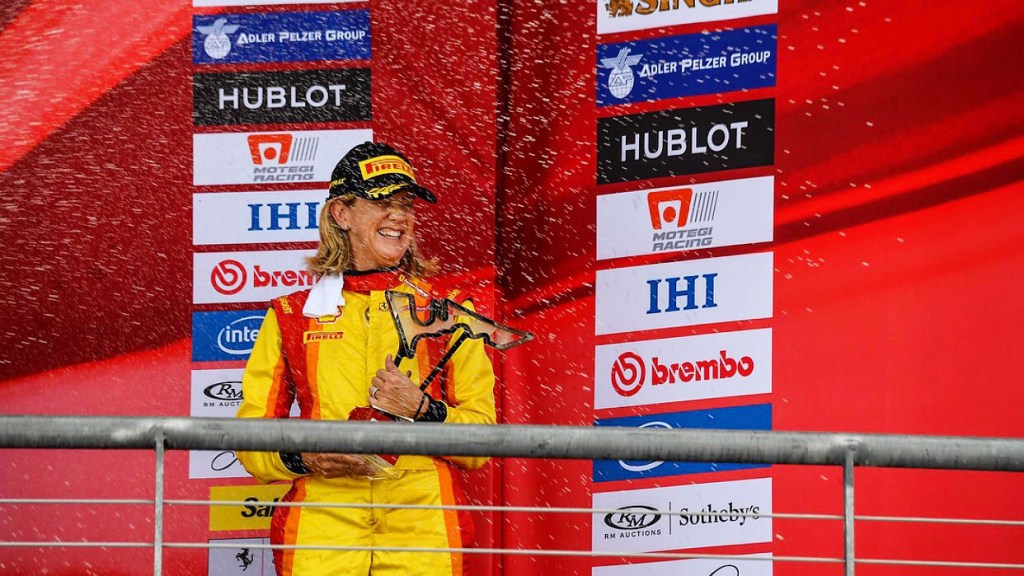 Lisa Clark’s smile lights up our dim corner at Soho House in West Hollywood. With her black suit, chic makeup, and smooth blonde hair, you’d never know that just a few hours earlier she was careening through the dirt in a Formula X off-road racecar—essentially a 200 hp dune buggy on steroids.

Clark, age 56, is an amateur racer who not only drives these “crosskarts,” she is also known for racing with Scuderia Corsa in the Ferrari Challenge, and in the EXR racing series, which comprises arrive-and-drive endurance competitions where drivers enter their own sanctioned racecar. (She is also a long-time judge at Robb Report’s Car of the Year events.)

Racing runs thick in Clark’s blood. The Beverly Hills resident grew up in Phoenix, Ariz., with a father who loved desert motorsports. At age 10, she got her first dirt bike.

“We’d go riding all day, and then pick up Kentucky Fried Chicken and come back and watch IndyCar,” Clark remembers. “I’d help my dad make Bloody Marys, and I’d eat the celery.”

Later, Clark learned to drive in a Ford F150 short bed with a manual transmission. Her father insisted on keeping things challenging. “He’d take me into ravines and make me learn how to get out,” she laughs. In high school, Clark got the first vehicle of her own: a Jeep CJ-5 with an engine that didn’t run. Her father, who offered to pay half if Clark would cover the rest, rebuilt the engine, and Clark helped.

“He made me read Zen and the Art of Motorcycle Maintenance,” Clark says. “Reading that summer and putting together the engine with my dad was really the launch of my loving cars.” Clark would save her money to buy aftermarket parts for the Jeep, such as chrome rims, then show her Jeep at Motorama, a local car show, and go cruising in downtown Phoenix.v

During college, Clark was seriously injured in a motorcycle accident that left her with two broken legs, a broken collarbone, and a concussion. Instead of shying away from driving, she took the settlement money and bought herself a Porsche 914, joined the Porsche Club of America, and started doing autocross. But it wasn’t until the last few years that Clark—married, with two daughters in their mid-teens—started racing competitively.

“My husband said, ‘The girls are getting old enough, why don’t you pursue it?’ So we bought a Ferrari California,” Clark recalls. She was interested in the Ferrari Challenge, but was hesitant about starting in such a competitive series. “I didn’t want to be a woman entering the series and be at the very bottom,” she says.

Clark then got a Porsche Cayman S and converted it to a track car. She hired a racing coach and started doing track days with various organizations. From there, she joined the EXR racing series driving a 230 hp Renault. After about a year, she was ready to move up.

“I wanted to race Ferrari Challenge. I love the car and the brand, and if I can do that and be respectably in the middle of the pack, not the bottom, that was my goal.”

With lots of practice and hard work, Clark indeed achieved her goal. Last year, she ran her Ferrari 458 EVO in the Ferrari Challenge, driving for Ferrari of Beverly Hills. Although she didn’t place high enough for a podium finish, Clark received the “Ladies Cup” last season for North America. When Clark is asked if she feels patronized by such an award, she takes a deep breath.

“That’s a tough thing—once I get in a car, I don’t feel any different than a man. I’m being called out as the ‘lady,’ but I started realizing that when women would bring their daughters to the race, they’d want to take a picture [with me], and now I realize I’m empowering other women and girls. So I turned it around into a positive.” Clark does acknowledge that she may not think about racing the same way as her male counterparts. “One thing we have is a different mind-set. A coach said it’s different to coach a woman because we don’t react, and we listen (chuckles). We just approach racing in a different way.”

Clark, who currently owns a Ferrari 488 GTB, a Mercedes-AMG G 63 (both of which are bright yellow), and a Porsche Cayman S, says she prefers modern sports cars over classics and would like to drive a Bugatti and a McLaren P1 someday. As for gender equality in racing, she says there are more and more women out there who do it, but they just don’t get enough support.

“There has to be more attention drawn to women racers,” Clark asserts. “Nobody wants to sponsor them and nobody wants to see them, but there are women that are doing this, and we need to bring them to the forefront. Get their names, do commercials, show them so [other] young women can see them.”

Clark admits that while sexism still exists in the sport, she has never personally been the target of harassment. She keeps her focus on the track, and on other racers who inspire her, like Christina Nielsen and Katherine Legge.

“These are strong, remarkable women—they don’t back down to any controversy, and they’re empowering me,” Clark says.  “It helps to pull me through the hard times.”

Highest-Paid Athletes: 25 and Under Led by Allen, Osaka, Mbappe

‘Naomi Judd: A River of Time Celebration’: Memorial Telecast’s Producers Tell How the Show Came Together in Seven Days

To Get a Painterly Effect Without the Mess, Here Are the Best Oil Sticks