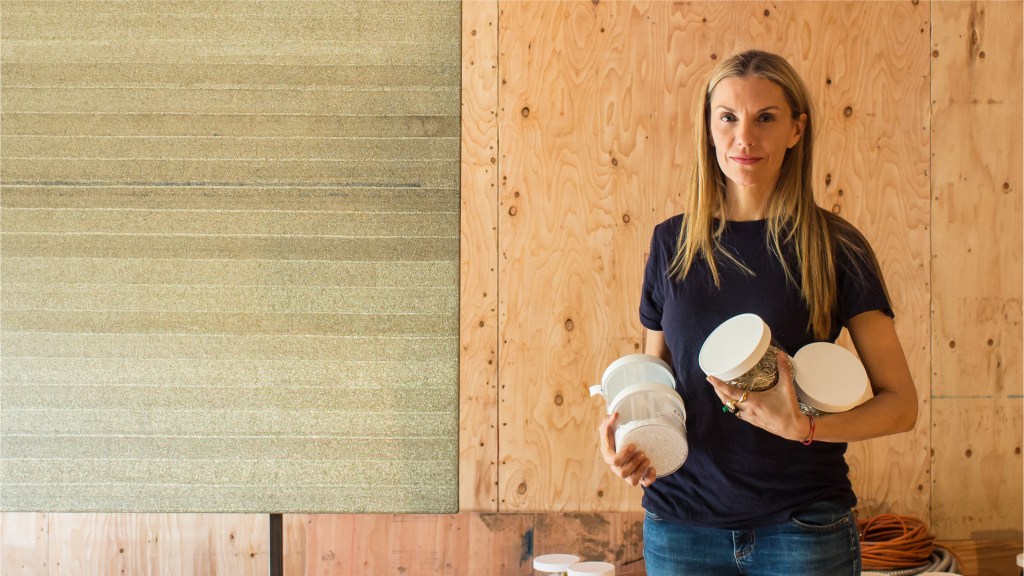 There was a time when Liza Lou’s art was reduced to little more than something pretty to look at. The contemporary artist, well-known today for her large-scale installations and sculptures composed of millions of tiny glass beads, faced the long, uphill battle of convincing the world that her vibrant and meaningful pieces were indeed works of art.

“When I began working with beads, no one thought that what I was doing was art,” Lou says. “But for me, it summed up what it feels like to be a woman in so many ways: to be marginalized or not taken seriously, because one is small, or because one is pretty.”

Though Lou is indeed small and pretty, her works are absolutely serious, touching on provocative and sometimes controversial topics, yet sparkling and beautiful at the same time. And this week, starting September 6, the artist will debut a much-anticipated solo exhibition, Classification and Nomenclature of Clouds, at Lehmann Maupin’s new Peter Marino–designed gallery in Manhattan. Muse spoke with Lou on the eve of her show’s debut to talk about art-world biases, aha moments, and the power of the humble bead.

How did you come to find your voice through beadwork of all mediums?

Starting out as an artist at age 18, I self-identified as a painter and assumed that would be my chosen medium. But then one day, while I was still in art school, I happened to walk into a bead store and suddenly had a sort of cartoon-like moment—a Tom and Jerry moment if you will—where your eyeballs spring out of their sockets and back again. I was astonished by the colors and the textures of the material. For me, it was this was greatest art supply store I had ever walked into. I instantly saw the bead’s potential as an artistic medium, despite the fact that it has largely been considered a marginal, craft material used by people making jewelry.

Tell us about some of your early experiments using the material.

The first thing I made was a soup can. I thought that it would be interesting to see if I could slow down pop art and make pop items with a tweezers and glue. And that soup can lead to the creation of a whole kitchen out of beads. Kitchen (1991–96) took me five years to make, by which time I was out of school.

How was your work initially received?

When I began working with beads—keep in mind this was the late 1980s—no one thought that what I was doing was art. It was considered craft. It was also considered women’s work. In the art world, people tend to equate substance with anger, and if you follow that line of thinking, one might conclude that you can’t make something angry out of beauty. But I disagreed. And in time, so did the curatorial community. For me as a young artist that was a really thrilling thing. My Kitchen traveled to a number of institutions—including the New Museum in New York—for about 10 years. Since then, I have made a number of room-sized environments out of beads.

What led you to open your studio in South Africa?

I had become disillusioned with the idea of making art for presentation at places like Art Basel or art that was going into private collections and not being seen. I soon realized, however, that we do have control over what we make, and how we make it. This, in turn, led me to thinking about my practice and working in a way that could make a difference for the people that I collaborate with. And when I began thinking about the people who are fantastically skilled in beadwork, that naturally led me to the Zulu of South Africa. At that time, in 2005, KwaZulu-Natal was not only the epicenter of Zulu artisanal beadwork, it also happened to be the epicenter of the HIV crisis in Africa. So, for me, these two things just coalesced—KwaZulu-Natal being a place of great need and of great talent.

“In the art world, people tend to equate substance with anger,

and if you follow that line of thinking,  one might conclude that you can’t make something angry out of beauty.

But I disagreed. And in time, so did the curatorial community.”

So, what did you do when you got there?

My plan was to do a project there, to make a sculpture with the help of local artisans, and then I would go home. Little did I know I would remain there for a decade. My concept for the sculpture was to create a “security fence” as a statement of sorts on mass incarceration in the U.S. and on containment more globally. So I shipped a barbed-wire, chain-link enclosure, which was like a nine-feet-high, to South Africa, where I linked up with a non-profit that agreed to help me find women to work on the project. It is really silly now that I think about it, because, of course, if you take out an ad for a job doing beadwork in KwaZulu-Natal, you’ll have thousands of people show up. In any case, we put the word out and 15 women showed up on a rainy morning at a dance hall that I had rented on the docks.

How did they react to your idea?

When I unveiled this barbed wire construction that we were going to cover in beads, they literally broke out in laughter. They couldn’t believe that this crazy American woman would come all the way to Africa to make a bead-covered chain-link fence. For them, this was a symbol of apartheid, of having townships surrounded by barbed wire to keep their inhabitants in. Here I was saying, “We’re going to make it into something beautiful.” As one of the women I worked with later said, “We’re going to cover this ugly thing with love.” And that’s what we did.

As we passed our hands back and forth through the chain link over the course of several months—which is the time it took to create the beaded piece—a bond was forged between myself and the women I was working with. It was then that I realized that I wouldn’t be able to just walk away and let them carry on with their struggle. I wanted to see if I could make my project there sustainable, so that we could make art together, and they could build their lives and walk out of poverty into health and joy and sustainability. Almost 14 years later, the project continues with the same group of women and it has grown even though I have since returned home to California.

Tell us about the Lehmann Maupin show and your latest body of work, The Clouds.

Since moving back to the States, I have found a different way to work with the South African studio team, commissioning them to produce aspects of my work. For the exhibition in New York, for instance, I commissioned 600 beautiful woven sheets—“canvases” of sorts made out of strings of glass beads—which I had shipped to my L.A. studio. I then painted the sheets and interfered with them by crushing many of the beads.

With regard to The Clouds, it is a body of work that truly represents a special moment for me. For the first time, I’ve made a body of work in which you really see my hand, beyond the sheer craftsmanship of the beadwork. It is also a joy to be back to painting and exploring what glass beads can do in terms of dissolving boundaries between painting and sculpture.

Top of the K-Pops: 10 Up-and-Coming Groups to Know