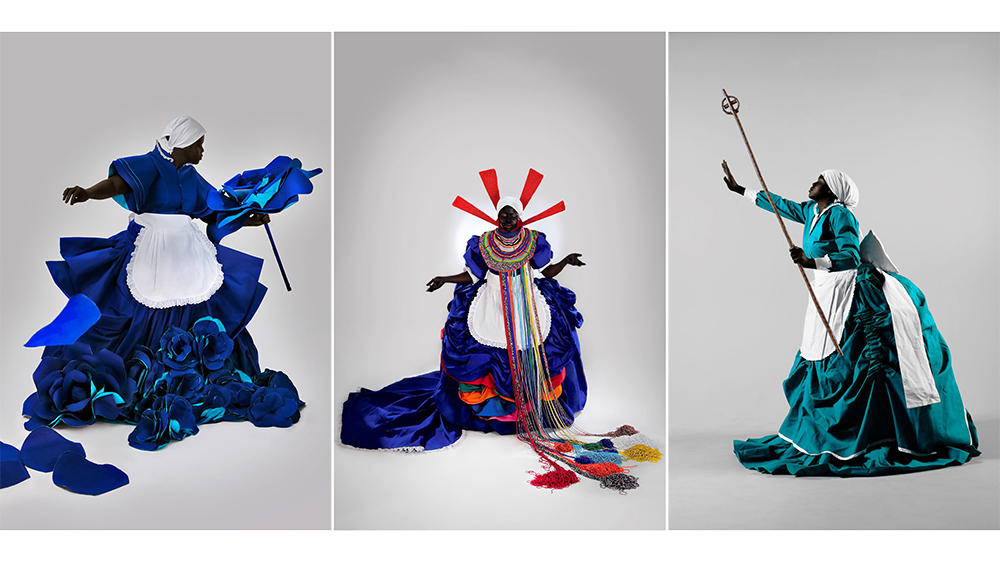 If you have ever seen Mary Sibande’s work, then you’ve invariably met Sophie. She is the South African artist’s muse, her alter-ago, her subject—her past and her present. Dressed in a Victorian blue gown with a white apron, Sophie represents the quintessential woman as Sibande has known her since childhood. “All the women in my family were domestic workers,” Sibande says. “And, of course, we were domestic workers because of apartheid and this institution that was introduced to limit the black body.”

Sibande’s mother, her grandmother and her great-grandmother all wore the same blue uniform as members of the servant class during Africa’s apartheid and earlier. It’s an association that Sibande says speaks to every South African. “These women were passive in their servitude from one generation to the next,” she says. “If this one dies today, she’s replaced with another one tomorrow. That throne is forever occupied.”

For the artist, however, the color blue is ripe with associations, and so, when in 2009 she first dressed Sophie in vibrant royal blue, it wasn’t solely as a reference to that darker time. “Blue is also the color of royalty, for Europeans—and of course, the Dutch, who colonized South Africa.”

It’s a stark juxtaposition—the royal and the indentured—especially when you see it in Sibande’s work. In her earliest pieces, Sophie—who is played by the artist herself, either as an actor in film and photography or as a mold for fiberglass sculptures—stands against a white background, her vibrant blue Victorian gown a hyper-color version of the traditional domestic worker’s garb. Indeed, she nearly appears queenly, and yet her are closed eyes and her face is passive to imply a woman who is trapped, her only release found inside herself. Whether Sophie is sewing a Superman jersey (a reference to both her inner power and then men for which she worked) or trapped in a giant spider web, she is in a clear state of conflict—physically present yet distant in mind.

Sibande’s striking commentary on race and gender has earned her a spot among some of Africa’s leading contemporary artists. She has shown her various iterations of Sophie at the Venice Biennale (at South Africa’s national pavilion), the Met Breuer in New York, and the Zeitz MOCAA in Cape Town. Her most recent solo exhibition is currently on view at the Leroy Neiman Gallery at Columbia University in New York. And with each iteration—each phase, whether blue, purple, or teal—her main character grows ever more influential. Represented by South Africa’s SMAC Gallery, she has seen her work rise in prominence, with recent sales of prints like Her Majesty, Queen Sophie selling for upwards of $13,000.

Born in 1982, Sibande saw the fall of apartheid during her early adolescence. She still remembers the days when her family was forced to carry dompasses (identification cards held by all black South Africans—the Dutch name translates literally “dumb pass”). She also remembers the protests that helped pushed apartheid toward its end, and her country’s first free elections in 1994.

Sophie experiences all of this history—both personal and political—through Sibande’s evocative works. Her “blue phase,” which started in her final year of art school in Johannesburg, represents the “rise of apartheid,” she says, while her “purple phase” represents “the fall of apartheid.” In those pieces, Sibande portrays her muse in similar Victorian dresses, but in a new palette, which she says was inspired by everything from the film The Color Purple to Cape Town’s Purple Rain Protest, a landmark anti-apartheid march that led to thousands of arrests after police sprayed purple dye into the crowd to “mark” them. “The Purple Shall Govern” became the protest’s slogan—and Sibande borrowed the phrase for her 2014 solo exhibition of Sophie characters clad in purple, their white aprons and bonnets of servitude falling from their waists and heads, and their posture taking on new forms of power and strength.

As Sibande herself grows—she now has a three-year-old son—so too does the power of her message. For her next phase, she will focus on the color red, a hue she says symbolizes the aftermath of apartheid and the anger that has been left in its wake. “I was looking at where South Africa is now—what do we do as a country after this horrible period?” she asks. “I wanted show anger, so I started with the color of passion and fire.”

To that end, Sibande’s latest works show Sophie as a warrior, donning a fiery red dress—reminiscent of the old Victorian get-up with puffy sleeves, but short and paired with matching knee-high boots—surrounded by fierce red dogs and riding a bucking stallion. Yet she doesn’t look angry; she is commanding. From her early days as a meek and subdued woman in blue—like so many women of color who have been oppressed—she has transitioned into a powerful and respected creature, her stature larger and braver. She is no doubt a symbol for Sibande’s country as it moves forward. She is also an avatar for the artist herself, breaking free from the subjugations of the many generations before her.

The Allegory of Growth at Leroy Neiman Gallery  ©Mary Sibande

Dsquared2 and Zlatan Ibrahimović Team Up for All Black Capsule Collection

Giannis Defends His Brand as Fervently as He Protects the Rim