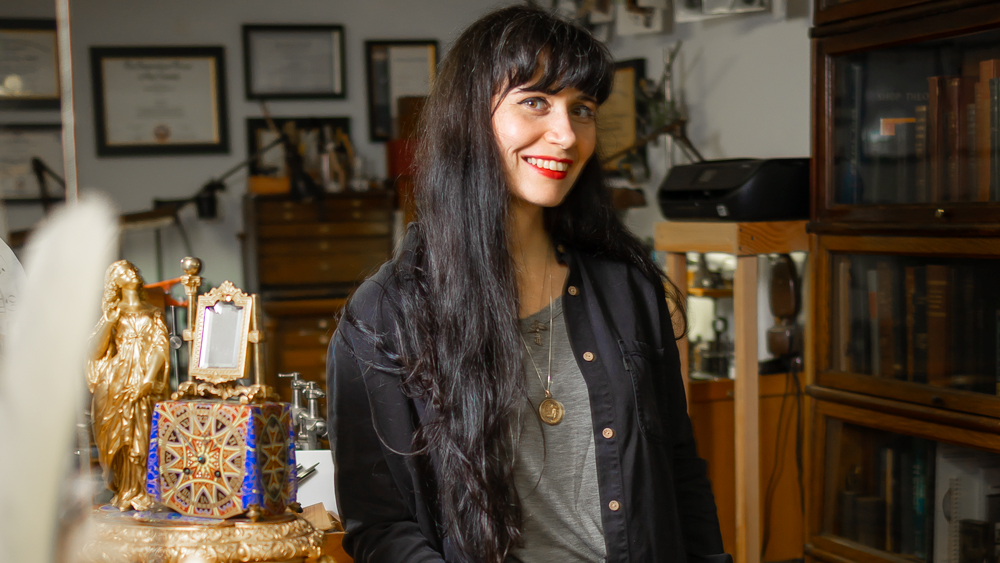 Brittany Nicole Cox describes herself as a mechanic from the 17th century. And the antique objects that she reanimates? She regards them as the first attempts at artificial intelligence.

“These were early robots,” says Cox, referring to the lifelike creations—singing birds, dolls playing instruments, a monkey smoking a cigarette—that, together with myriad old tools and machines, crowd her Seattle workshop. “Horologists were the leading scientists of their day, and these pieces were really the first attempts to automate what people saw in the natural world.”

Cox’s impressive résumé reads like a tome and took nearly a decade of higher education to achieve but, in summary, her expertise is in automata—self-operating mechanisms that mimic living things—as well as mechanical music objects and complicated timepieces. In the male- dominated world of traditional watchmaking, Cox is a rarity; in the realm of antique horological conservation, she is an island: “I am maybe one of two people that has a master’s in horological conservation in this country,” she says. Through her company, Memoria Technica, she offers a wide range of restoration and bespoke services, serving not only private collectors but also museums, auction houses, and the like. She works on everything from pocket watches to telescopes, but she specializes in automata.

Cox often forges her own tools to restore everything from telescopes to timepieces.  Photo: Cameron Karsten

“I guess I’m a modern antique sorcerer,” Cox says. “People used to believe that horologists were sorcerers.” In fact, she notes, some of the earliest automata were mechanical heavens, hells, or demons commissioned by churches. In 16th-century Milan, she points out, there was an automaton—a wooden devil—that, when cranked, growled, rolled its eyes, and wagged its tongue. “Can you imagine yourself in the 1500s walking into a church and hearing this horrible groaning sound and suddenly see this demon wobble up?” More philosophical minds used automata to pose questions about human existence. “Using automata was a way for scientists and philosophers like Descartes to illustrate that the body operates like a machine,” she says. “Which poses the greater question: Are we a machine? Is pain a mechanical reaction to a certain type of stimulation?”

“I guess I’m a modern antique sorcerer. People used to believe that horologists were sorcerers.”

It was her own unique view of the world that led Cox into this esoteric world. A music box from her maternal grandmother was the launchpad for her interest in micromechanics. “I was fascinated by the mechanical components and how they produced a very specific experience for me,” she says. After taking the music box apart to understand the mechanism, she started collecting more mechanical parts, watches, magnets, and springs.

It was Cox’s university studies in metaphysics and epistemology that led her to discover automata as ancient tools used to pose greater questions. The revelation caused her to abandon a career in philosophy and pursue her current path.

Restoring each automaton is itself a unique path. Oftentimes, pieces require her to invent new tools or source parts from around the world. Unlike traditional watches, automata were not mass produced, and so the parts and tools needed to repair them are as rare as the objects themselves. In specific circumstances, procuring a piece that will fit the automaton in question might take two to three years.

One recent singing-bird box, a project Cox inherited from a client of her mentor, the late horologist Dennis E. Harmon, required months of analysis before she discovered that a single spring, the thick- ness of a hair, was just slightly too strong. “Every piece that comes across my bench is different,” she says. “They all come with the inherent flaws or even biases of the craftsmen that were making them and those of whoever has touched them since.”

Her current projects include repairing a large collection of scientific instruments and concocting her own creations. The latter pursuit has her developing a series of 10 automata based on the medieval bestiaries from 13th-century illuminated manuscripts—a concept she developed a few years ago but has only recently had time to begin. “I’m in the process of prototyping the first beast in the series, which is a stag,” she says. “I’ve made the mold and everything for that one.” That automaton has been promised to the Museum of Jurassic Technology in Los Angeles; the others ultimately will be for sale (prices to be determined).

Even as she tries her hand at creating new automata, reviving rare relics—and investigating the stories and methods behind each—clearly remains Cox’s passion. “The value system was different because these things were built to last,” she says, referring to the centuries-old robots and the context in which they were made. “It’s almost as if [their creators] were able to do it because they weren’t imposed by everything that we have in modern life—they actually had the time to create.”

To the delight of automata fans, a handful of modern craftspeople and watchmakers are reviving the old-world art. Here are antiquarian horologist Brittany Nicole Cox’s top picks.

On the left, Efim Shargorodsky’s automata songbird appears at the push of a button. On the right, a magician by François Junod.  Photo: Courtesy

Known for building a variety of automata, including Pierrots that write and orchestras composed of animals, Swiss watchmaker Junod cut his teeth in restoration and now also creates new automata under his own name.

Shargorodsky’s antique singing-bird automata bring a taste of the treasures once owned by kings and queens to modern clients with a penchant for the extra- ordinary, like the below handcrafted egg, which conceals a diamond- encrusted songbird.

Founder Pierre Jaquet- Droz and his son Henri- Louis were renowned in the mid to late 1700s for their complex automata created for European aristocrats. To date, the Swiss watch manufacturer has carried on the legacy with astounding moving creations miniaturized for the wrist, such as the Charming Bird timepiece featuring a miniature songbird.

A slice of heaven miniaturized for the wrist, the Lady Arpels Midnight Planétarium timepiece depicts Mercury, Venus, Earth, and the moon revolving on aventurine discs around an 18-karat-gold sun in real time. A shooting star indicates the hour.

This Russian watchmaker’s patented Cinema timepiece features a built-in movie that plays when the crown is pressed on the bezel. The standard model pays tribute to British photographer Eadweard Muybridge’s time-lapse photos of a man on a galloping horse, but clients can have their Cinema timepiece outfitted with scenes from their own favorite flick.

Calabrese started out in watchmaking at just 14 years old, repairing timepieces in Naples. He made a name for himself as the inventor of Corum’s Golden Bridge, but now he is making his own exceptional watches.

The independent watchmaker’s fascination with out-of-this-world concepts resulted in the  creation of a domed timepiece, the Deep Space Tourbillon, with a suspended triaxial tourbillon.

Virgil Abloh to Be Celebrated in Nordstrom’s Latest Pop-up

March of the Cyborgs: the 59th Venice Biennale