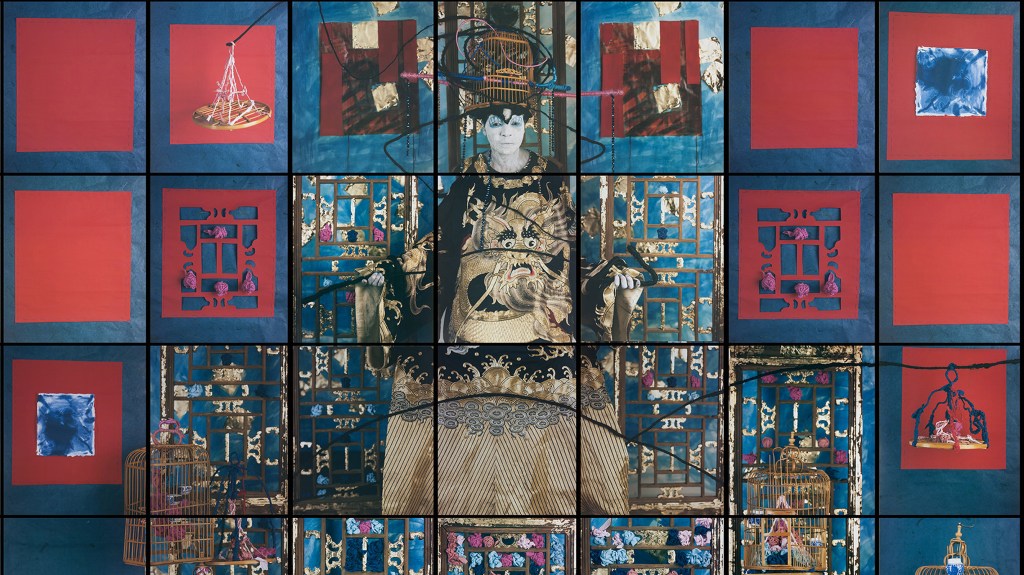 Photo: Courtesy of the artist

Back in 1974, when oil heiress Philippa de Menil, art dealer Heiner Friedrich and art historian Helen Winkler founded Dia Art Foundation with the mission of supporting ambitious, hard-to-realize projects, they began with 12 artists, including Donald Judd, Cy Twombly and Andy Warhol. “They were mainly the artists Heiner showed in his gallery in Munich,” explains Jessica Morgan, Dia’s director. “They were the people he was close to.”

They were also exclusively male.

Therein lies the rub—and the rough outline, repeated over centuries and across borders, for the formation of much of the Western art historical canon. The powers deciding whom to commission or exhibit were overwhelmingly white men, and they predictably migrated toward more of the same.

“Without doubt, there has been systemic bias against women artists and artists of color and anything that represents diversity for decades,” says Morgan, adding that if dealers, curators or collectors “had a choice between A and B, and A was a male artist and B was a female artist, they were going to go with A.”

Morgan, however, is among a growing cohort of art world insiders determined to make a major course correction. Many of the institutions at the forefront, including Dia, the Museum of Contemporary Art Chicago—where, for the Laurie Simmons retrospective Big Camera/Little Camera, on view through May 5, visitors who feel they have been adversely impacted by the gender pay gap are welcome to pay a discounted admission fee—and the Hammer Museum in Los Angeles, are led by women.

Photo: Courtesy of the artist and PPOW New York

Apparently sensing that all-male rosters are no longer a good look, topflight galleries such as Pace, David Zwirner and Hauser & Wirth have signed mid- or late-career women or their estates in recent months, and auction houses don’t want to be left out either: Masters Week at Sotheby’s New York this past January marketed its central sale, featuring work by leading women artists from the 16th through 19th centuries, as The Female Triumphant. Seven of the artists, including Elisabeth-Louise Vigée Le Brun and Angelika Kauffmann, achieved new auction records. Even the Museum of Modern Art has announced that when it reopens in October after a major expansion it will have rehung its collection to show off a more diverse group.

Morgan’s commitment, however, is not just about dusting off some works from storage or buying a painting or two. Dia is known for its in-depth collecting—acquiring dozens, if not hundreds, of pieces by an artist, then granting that artist a big chunk of real estate at Dia:Beacon, its museum in a former Nabisco factory in upstate New York, or Dia:Chelsea in the city. Since arriving from Tate Modern four years ago, Morgan has led a reconsideration of Dia’s sweet spot, art from the 1960s and ’70s, directing resources to accrue significant bodies of work by mathematically inspired abstract painter Dorothea Rockburne and California light artist Mary Corse, among others. In addition to women, Morgan is intent on recognizing artists from other groups once routinely overlooked, including Lee Ufan and Kishio Suga, both influential in the Japanese Mono-ha movement, and African-American artist Sam Gilliam.

In the case of the late German artist Charlotte Posenenske, Dia acquired 155 artworks from her estate and opened an installation in March. The museum is also acquiring pieces by Jo Baer and Joan Jonas. “You have to put some effort in if you want to come up with a different history, which might be a more accurate reflection of that time,” says Morgan. “Most of these artists were showing at that time. For one reason or another, they just got lost along the way.”

Some struggled to find galleries; others took back seats to their husbands’ careers. When Dia acquired Sun Tunnels, Nancy Holt’s installation of enormous concrete cylinders in the Utah desert, Holt posthumously became the first woman represented in the museum’s collection of iconic land works, which includes Walter De Maria’s The Lightning Field and Robert Smithson’s Spiral Jetty. Prior to her death in 2014, Holt, Smithson’s widow and executor, had donated Spiral Jetty and seemed content, even after his passing, to keep her art in the shadows. “She just didn’t push her own work,” says Morgan. “She talked about Bob’s work all the time. She wasn’t promoting herself.”

Artist Susan Unterberg has been quietly promoting other female artists for more than 20 years. Only in recent months has she decided to amplify her voice. Back in 1996, the then 55-year-old Unterberg—a photographer who came into her own after marrying at 20, having two daughters in quick succession, returning to finish her college degree when they were in elementary school, then earning a master’s—secretly founded Anonymous Was a Woman to give no-strings grants to female artists.

“I am a feminist and I knew how hard it is for women,” says Unterberg. The National Endowment for the Arts had canceled its grant program for individual artists, and Unterberg wanted to help fill the void. Using a foundation she inherited from her father, she funded the prize while, somewhat paradoxically, shielding her own identity. “I was an artist and didn’t want to be known as a philanthropist,” she says. “I never wanted to be in the limelight. I never expected to go public.” (The prize’s name is inspired by Virginia Woolf ’s observation that, to be taken seriously, female creators often needed to hide their gender.)

Last summer, Unterberg finally unmasked herself at the urging of one of her daughters. (Her children and a very few friends knew of her involvement; her five grown grandchildren did not.) Spurred on by the voices of the #MeToo movement, she says, “I felt that I could push this forward if I wasn’t anonymous, if I used my own voice.”

Each year Unterberg, who is known for her intense portraits delving into familial ties, anonymously assembled nominators and a jury—all women—who doled out $25,000 grants to 10 female artists over the age of 40. Some, like Betty Tompkins and Dotty Attie, two of last year’s winners, are in their seventies or eighties, but most are in midlife.

“The middle period is kind of like the desert—it’s fallow,” says Unterberg, who also recently completed a term as cochair of the artists’ colony Yaddo. “Women often have family concerns, and their work is not valued as highly as men’s. The market isn’t strong for women. It’s gotten stronger for very young women just out of graduate school, and some much older women have been rediscovered, but it’s the middle period that seems most in need.”

Photo: Courtesy of the Estate of Charlotte Posenenske

The prize does not consider financial need, in part, she explains, because almost all artists could use the cash but also because it’s meant to serve as a loud attagirl. “One of the reasons I started it,” she says, “was that it would have been great if I could have gotten such a grant. I’m talking from my own point of view: Because somebody has money enough doesn’t mean that they don’t need this kind of recognition.”

Sculptor Arlene Shechet, who won in 2010, describes the award as a much-needed affirmation, both psychologically and professionally. She notes that two years later, the Institute of Contemporary Art in Boston invited her to present her first museum survey, and while prizes don’t translate directly to such offers, “clearly without getting X, Y, Z it’s not happening. You just have to have a certain amount of peer recognition that makes institutions feel less insecure.”

Arlene Schechet’s All in All

Unterberg relishes Anonymous’s role in women supporting women, but the movement to give overlooked female artists their due has male supporters as well, chief among them Richard Saltoun. From a small, seven-year-old gallery in London’s Mayfair neighborhood, Saltoun has resurrected the commercial careers of a clutch of pioneering feminists, including Renate Bertlmann and Eleanor Antin, who had been at best ignored, at worst blackballed, because the establishment deemed their boundary-breaking work pornographic. And while he also exhibits artworks by men—this past winter he showed Ulay, who, ironically, has long been overshadowed by a woman, his former lover Marina Abramović—for the next year, Saltoun has committed his eponymous gallery to a new program he’s calling 100% Women.

“Our entire modus operandi is very much about shedding light on artists who have been neglected,” says Allison Thorpe, a director at Richard Saltoun. In March, 100% Women launched with a solo exhibit of work by Rose English, who has been making art about gender identity, among other themes, since the early 1970s. “She’s been completely integral to the development of performance art within Britain. But outside a small fan base, no one knows who she is. Richard wants to be sure her rightful place in art history is cemented.”

The gallery hopes it can do for English and the others what it has done for Bertlmann, an Austrian whose work focuses on gender and sexuality. Saltoun began exhibiting Bertlmann in 2013, and this year she will represent Austria at the Venice Biennale. “Galleries need to have a relationship with an artist and nurture that career,” says Thorpe. “Renate is such a perfect example in that after so many years, she is finally seeing a return—this isn’t a financial return; this is a return of respect by her peers and the industry.”

Thorpe adds, however, that today there are indeed buyers for the work of these once-dismissed women. The importance of such sales cannot be overstated. One reason institutions—and the canon they collectively create—are slow to change is their boards, whose members “are protecting their male-oriented collections,” says Shechet. “I don’t think people are going to stop protecting their collections. Their collections just have to change.”

Sportico Transactions: Moves and Mergers Roundup for May 27