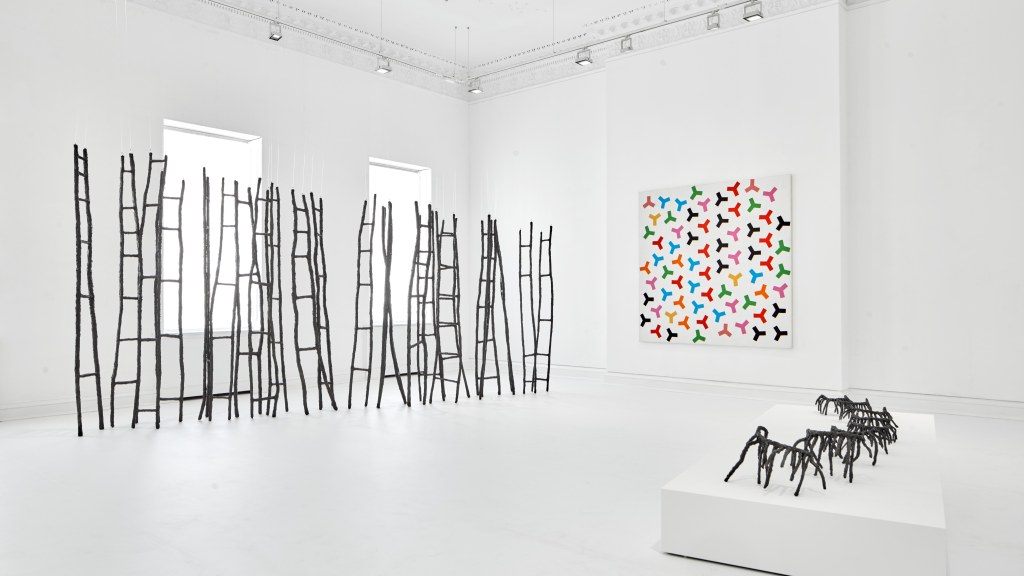 “I never cease to be amazed at just how many women have been largely written out of the contemporary art narrative,” says Anke Kempkes, curator of Land of Lads, Land of Lashes, an exhibition that runs from June 25 through August 11 at London’s Galerie Thaddaeus Ropac. This landmark show aims to right a half-century of wrongs and rewrite the narrative when it comes to recognizing the seminal contributions of three female pioneers of the avant-garde—Rosemarie Castoro, Lydia Okumura, and Wanda Czelkowska—whose careers have been long-overshadowed by their male counterparts—Carl Andre, Sol LeWitt, and Donald Judd. “While these men rose to prominence on the international art-world stage in the 1960s and ’70s, these revolutionary female artists and sometime collaborators were not afforded the same visibility and institutional support. Through this exhibition, we hope to address that.”

“Though the artists came from distinct cultural backgrounds, they collectively created an avant-garde inside the avant-garde,” says Kempkes, citing Castoro’s blend of the sensual and surreal with the cool, mathematical rigor of minimalism; Okumura’s melding of the visual traditions of her Japanese ancestry with the Brazilian geometric of her homeland; and Czelkowska’s fusion of anthropomorphic sculpture and the brutalist architecture of her native Poland in the waning years of Stalinist rule.

More than four dozen works by the artists fill two floors of Ropac’s new Dover Street digs in the 18th-century Ely House—one-time home of the Albemarle Club, which counted Oscar Wilde among its members. Highlights there include Czelkowska’s aluminum Ellipse (2018), which, at 25 feet in diameter, is a formidable, albeit minimalist presence in the ground-floor hallway.

An adjacent room hosts Okumura’s colorful, yet ghostly Labyrinth (Variant II) Concept first realized at the Museu de Arte Moderna, São Paulo, 1984 (2018) in stainless steel, wire mesh, and acrylic paint, while a second-floor exhibition space hosts a trio of pieces by Castoro, including a pair of sculptures from which the current show takes its name—Land of Lads (1975) and Land of Lashes (1976). The latter is a suite of 8 parading false eyelashes by the New York artist, executed in steel and fiberglass.

Prior to this exhibition, the Cologne-born Kempkes spent a dozen years promoting the work of female avant-garde artists through her now shuttered New York gallery, Broadway 1602. And she is more committed than ever to creating a legacy for these women—particularly for Okumura, now 70, and Czelkowska, 87, who can still enjoy such well-deserved recognition, however late in coming it may be. Sadly, she says, Castoro passed away at age 76 in May 2015, well before the opening of her critically acclaimed retrospective at the Museum of Contemporary Art in Barcelona, Spain, this past winter. “For me, being able to advance the market for the work of these women—which is far more surprising and radical than that of their male peers—is not only political, it’s emancipatory.”