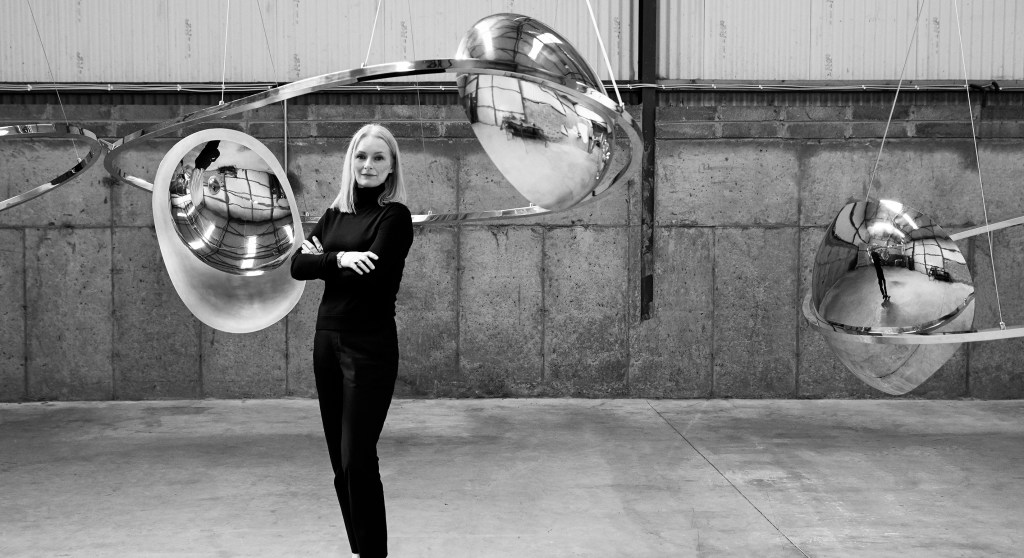 But a new generation of women is challenging this once-manly bastion of the art world, hammering at anvils, wielding torches, and stoking furnaces to unbearable temperatures. The physical demands be damned, these artists—all three of whom will be exhibiting at the Salon Art + Design in New York City this fall—are bringing a new sensibility to metalwork, transforming the hard and heavy material into furnishings, objects, and artworks that are fluid, refined—even feminine.

Erin Sullivan’s first foray into metalwork was decidedly small-scale. The New York–based artist started out as a jewelry designer, crafting delicate rings and bracelets in silver and gold. But one day, an epiphany struck: Looking at her drawings, she suddenly saw her pieces on a larger scale—as furnishings.

“It happened in a moment of pure knowing,” Sullivan recalls. “It wasn’t enough for people to look at what I made. I wanted people to touch it, for it to have a function.” Indeed, the urge to touch Sullivan’s works is difficult to deny. Her tables and stools rendered in the unlikely forms of cascading feathers, draping alligator skins, and bubbling volcanic lava challenge our notions of weight and mass, begging us to run a hand across their unexpected contours. Her mushroom shelves and cornutes-horn hooks demand a double take, appearing at first glance not as sculpted objects, but as organic forms dipped in bronze.

The common thread, of course, is nature. Sullivan, who draws inspiration from everything from Buddhist traditions and Egyptian mythology to Claude Lalanne’s famed crocodile settee, finds beauty in barnacles, beetles, skulls, and snakes. After creating wax molds from these organic materials, she pours molten bronze heated to 2,000 degrees Fahrenheit inside, and, after it has cooled, extracts the piece. Then, over a period that can last months, she welds, mends, sculpts, and polishes until she achieves the ideal form. The resulting creation—whether a stool that appears wrapped in snakeskin or a table that seems to be composed of interconnected honeycombs—is the completion of a “hero’s journey,” says Sullivan.

“The hero’s journey and the artist’s journey have always been deeply intertwined for me,” she says. “Every time I begin a new piece, another hero’s journey begins anew.”

Erin Sullivan in her foundry.

Irish sculptor Niamh Barry can look downright diminutive when compared with the works she creates. Her suspended lights blending hand-welded bronze, LED lights, and opal glass tesserae are giants, sometimes elliptical orbits resembling hovering celestial bodies, other times jagged masses that look like erratic scribbles. That the sculptor manipulates such behemoths with her own two hands is hard to fathom.

“There’s definitely a different energy—more muscular and dynamic—that appeals to me,” Barry says of her craft. “But it is so demanding physically on me that the absolute daily limit I can work with my medium is two to three hours. I have had to learn to be disciplined and know my limits.”

Before placing hands to metal, she begins with a set of drawings—a significantly less strenuous art that is eventually translated into a three-dimensional shape. Though she keeps her original sketch in her head, she allows for spontaneity, hammering and welding the components until they at last take a complex form. Of her life-size, immersive sculpture Walking—which is intended to be walked around—Barry says, “It was only while we were working at it in full scale that I was able to make decisions.”

Barry’s evolving relationship with each new sculpture also dictates a certain one-woman ethos. “It is vital to me that I have my hand on every aspect of what is made in my studio,” she says. “Only when I achieve the finished piece will I teach my team how to do the same.”

Niamh Barry in the studio.

For Junko Mori, sculpting is a spiritual journey. “I have a very Buddhist point of view,” she says. “My mind is unconscious, and my body keeps moving. And an hour later, the piece is in front of me.”

The Japanese-born, Wales-based artist’s process is indeed a meditative experience. Her steel and silver objects are the result of repetitive labor, in which she hammers hundreds or thousands of the same components before welding them together with no preconceived notion of the final form. And though some of what she creates takes on familiar shapes—pine cones, coral, hydrangeas—there’s something otherworldly about them, too.

“I try to create a natural chaos,” Mori says. “[A piece] can sometimes become robotic—it starts to look stiff and too mathematical. That’s when my human consciousness has to cut into the process. I’m anti-perfection.”

Rejection of perfection notwithstanding, Junko’s pieces are remarkably detailed and delicate—something that belies the artist’s intuitive method of sculpting. Her Propagation Project, a series of forged-steel works coated in beeswax, bend and curl so convincingly that they appear suspended in movement, as if blowing in the wind or drifting through water. Other pieces incorporate organic materials like dried plants, creating a juxtaposition of the permanent and impermanent.

Junko’s contemplative process also informs her decision not to describe her works—an attempt, perhaps, to draw the viewer deeper into her spiritual journey. “If you can see the piece in front of you,” she says, “we don’t have to talk much.”

Junko Mori putting the final touches on a design.

TOP IMAGE: Niamh Barry with one of her designs.