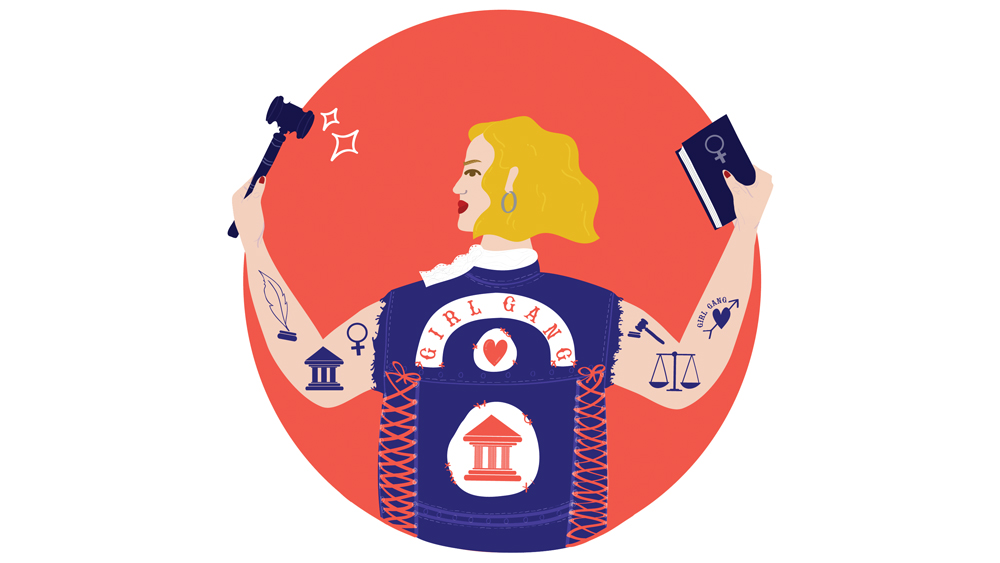 Last year, Supreme Court Justice Ruth Bader Ginsburg told a crowd at Roosevelt University in Chicago, “There will be enough women on the Supreme Court when there are nine.” But what would the rulings of an all-female high court look like? Humorist Blythe Roberson takes a gander.

After men with too much time on their hands sued a bar, claiming that its ladies’ night promotion was gender discrimination, the Supreme Court’s ruling on this case definitively legalized women-only spaces, female career seminars, and cool leather jackets that say, “Girl Gang.” As the Chief Justice wrote in her opinion, after thousands of years of patriarchal oppression, it was not discriminatory for a bar to offer women half-price Modelos because “just give us this one thing.”

This landmark case criminalized the practice of famous male writers giving interviews where they list the books that have inspired them and somehow don’t include a single one written by a woman or a person of color. It also instituted a fine of $1 million for any important male author who publishes a book over 1,000 pages because he thinks he is too good for editing.

Supreme Court V. Whoever Has a Problem With It

The Court ruled that henceforth the justices would be wearing short-sleeved robes for summer.

This landmark ruling mandated that any pharmaceutical company that manufactures female birth control immediately begin manufacturing equivalent male birth control. As the Chief Justice wrote in her opinion, “How would guys have an IUD? I don’t know, figure it out. Maybe they eat it.”

Selena Murray’s case— brought against Reddit for failing to protect her from sexual harassment by its hotbed of trolls— was considered a long shot: Cyberbullying had been a protected form of free speech for decades. But in this case, the nine female justices rendered Reddit’s army of ne’er- do-wells an exception to the rule of prior restraint. From then on, angry men would be forced to meet in secret to share sexist GIFs and rage comics.

When a worker sued McDonald’s for a higher wage, the Supreme Court ruled that the federal minimum wage be raised to $15 per hour, and that all women be paid at least minimum wage for domestic work and childcare. Additionally, the Court ruled that every woman in the U.S. be given $20,000 in back wages because, like, come on.