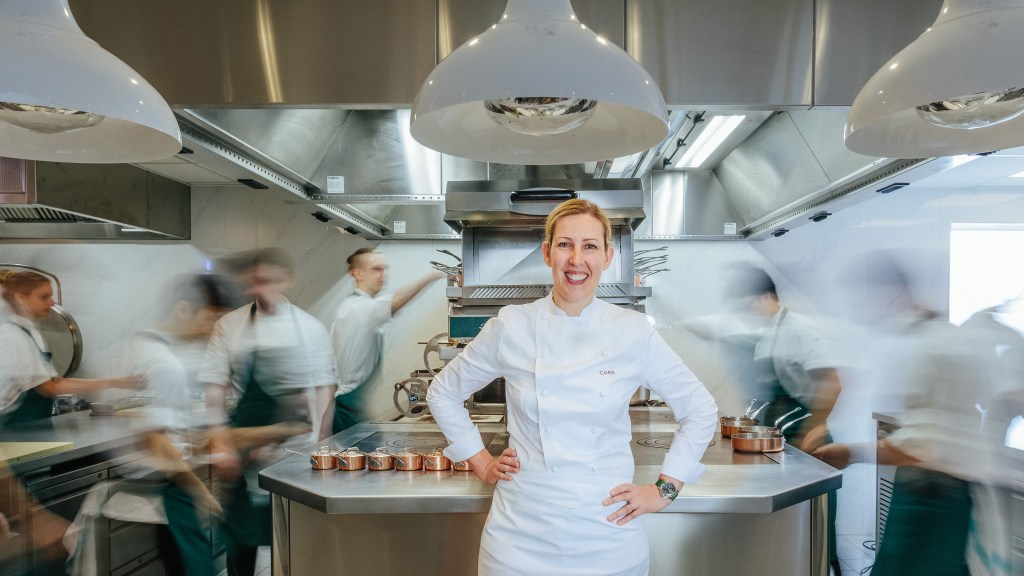 Chef Clare Smyth can remember the exact moment she wanted a career in Michelin-starred kitchens. “It was the very first time I stepped foot in Restaurant Gordon Ramsay,” she recalls. “There was so much energy, and the food was phenomenal. I had never seen anything like it, and I knew it was where I needed to be.” She spent more than a decade working her way up the ranks of that restaurant, acquiring roles as senior sous chef, head chef, and, at just 28 years old, chef patron—making her the first and only woman in the UK to run a Michelin three-star kitchen (to this day).

In her role as chef patron, Smyth earned an abundance of accolades: She was named the Good Food Guide’s National Chef of the Year, received the Chef Award at the Cateys, and was appointed Member of the Order of the British Empire. They all served as stepping stones to the opening of her own Core by Clare Smyth in London’s Notting Hill neighborhood, where she serves elevated, produce-driven cuisine indicative of the region. Since her August 2017 opening, the recognition only continued. In April, it was named Best Restaurant by the GQ Food and Drink Awards, and in May, Smyth and her team catered the royal wedding.

So, when the World’s 50 Best Restaurants named Smyth as the “World’s Best Female Chef” last week, it shouldn’t come as a total surprise—unless, of course, you consider the title itself.

“I think anything that celebrates hospitality is a good thing because we always want to highlight success in the industry; however, we should be making more of an effort to include women from the beginning,” says Smyth. “There are women out there at the top of the industry. They’re not always so quick to step forward themselves, so it’s up to the rest of us to seek and find them—because they’re there.”

Here, we chat with Smyth about British cuisine today, the role we all have in recognizing female talent, and how she celebrates her own womanhood.

What should more people know about British food?

We don’t traditionally have a strong fine-dining background, but we have phenomenal produce. We’re surrounded by amazing seafood, with some of the best langoustines and scallops in the world. We have strong, beautiful soil, and we’re really rich in game. British food can be quite rustic, but I like to explore how we can elevate those ingredients and use them in a fine-dining setting, while also showcasing a nod to our own culture. I like to have a little bit of fun with it.

How do you execute this on your own menu?

One of the first little snacks we serve is our version of a jellied eel. It’s something that typically comes from the East End of London that most people wouldn’t find very appealing, but we’ve tried to heighten it and share the story with people of its origins. I think dining should have a sense of place. It’s nice when people can travel to the UK and have the chance to understand more about our food and culture.

What does the title of “World’s Best Female Chef” mean for you?

I felt quite honored when I received it because there were a thousand people on the panel that voted for me. When people want to award you with something, it’s always very nice. For me, it’s really more about what I can do with the award—if I can share my story with other people and if I can use it to help support women in hospitality. If I can use it to inspire them, then that’s a great thing because we definitely need more women in the industry. I don’t really see the award as a thing for myself—I see it as a platform to talk about things.

“In my experience, women are less likely to step forward and promote themselves.

We need to encourage that a bit more and support each other.”

In your years of cooking in Michelin-starred kitchens, were there many instances in which you were reminded of the fact that you weren’t just a chef, but, in fact, a female chef?

No—not until I took over Restaurant Gordon Ramsay, when I was the first woman to take over a three-star restaurant. In the kitchen, I never felt it because our work is not gender-specific—we’re chefs, and we just get on with doing our jobs. It was really everybody on the outside world that reminded me that I was a woman, by questioning me and asking what it was like to be a female chef. Before then, it had never occurred to me. I was just doing my job.

Now that you’ve been at the top of the industry for some time, have you felt those labels begin to dissipate?

Unfortunately, not really. Externally, on an everyday basis, people mention it. I used to find it annoying when I was younger because I didn’t see how it was relevant—but it is relevant because there aren’t very many women in the industry, and we do want to have more. We want to have more people in the industry, in general, and I feel strongly about making it an attractive field for young people to come into for work.

How do we motivate that change?

We have to talk about it, continue to make women visible, and strive to champion people. In my experience, women are less likely to step forward and promote themselves. We need to encourage that a bit more and support each other. I try to work quite closely with the young women in my kitchen; I see it as my duty to support them all the way through to the top. I’m pretty certain that if we all make a big effort now in helping these young women to break through, they will change the industry for the better.

Are there any other changes you’d like to see happen in the restaurant industry?

Not everyone understands that there’s a price involved in running a restaurant, and that to buy great product that is sustainable and for everyone to earn a decent salary costs money. When a high-end restaurant opens, the first thing I’ll hear about it is that it’s expensive—and expensive is seen as a negative thing. But there’s a difference between something that is expensive and something that costs a lot of money. Sometimes, things just cost a lot of money because they are what they are—there’s a lot of labor involved, the products are high-quality, and there are necessary overhead costs. I’d like to see a change in that perception.

How would you describe your leadership style?

Nurturing in that I definitely look after people, but I’m also quite disciplined. I believe it’s really important to have structure in the environment to achieve consistency. We work as a cohesive team, but every single person on that team is crucial. It’s important to me that each person plays their part, and that each person has their own personality.

In a male-dominated industry, how do you celebrate your womanhood?

Fitting in has always been the thing for me—I had always wanted to be the same as everyone else during my time as a young chef coming through the ranks of the kitchen. But I love dressing up. I love getting my hair and makeup done. I love fashion, and I’m really into British designers. I just bought an Amanda Wakeley dress, and I’m really fond of Burberry and Mulberry. I really do love and enjoy being a woman, and it’s important to me—especially when there are so many events throughout the year with so many men. It’s really nice to show up and to celebrate being feminine. That’s something that we, as women, can do.

Harry Styles Opens Up on First Movie Nude Scenes: ‘There’s No Peen in the Final Cut’